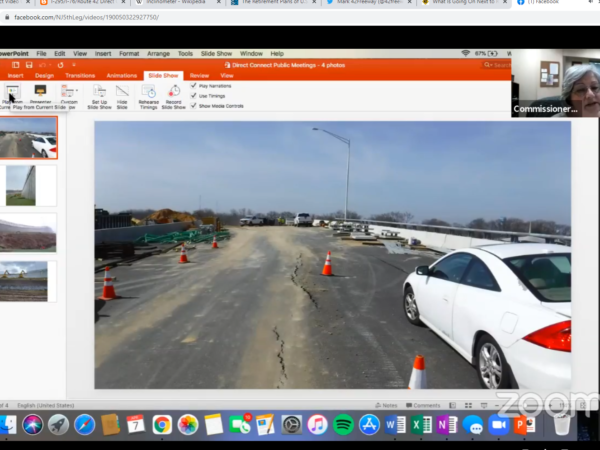 Topics also covered were the full project status and missing moves.  The meeting was organized by the Fifth Legislative Team, with Assemblyman Bill Moen the core organizer.

The NJ Fifth Legislative District Facebook page has the full video available to view!  But if you want an overview.. read or scan down through the 42Freeway recap!

Too Soon To Tell, But Answers are coming

The very short summary is:

42Freeway’s take is:   I understand that it’s still early to have all the answers.  I really appreciate the Commissioner “sticking her neck out” in agreeing to conduct this call.  I really appreciate Assemblyman Moen for getting involved and pulling this meeting together.   And I do believe we will see regular and real updates on the Bellmawr area projects.

And the path is laid-out. In about a month we should have solid answers on the roadway collapse, and we should see evidence of the increase communications on the project.

And you know if those things don’t happen… you’ll hear about it at 42Freeway.com!

It was clear that the questions were not pre-scripted for NJDOT.  Moen was asking questions directly from those who pre-submitted, and also live from the audience via the zoom chat.  The Commissioner at least once called out a question/topic herself from the Zoom chat, and spoke to it.

The meeting was hosted by Assemblyman Bill Moen.

The call was broken out into 4 facets, with two of them being core information.

Primarily it was Assemblyman Bill Moen and Commissioner Diane Gutierrez-Scaccetti at the helm.

Roadway Collapse: What Was Shared

Cracks Noticed the Day Before

While we dont have all the answers yet… there was some interesting aspects that were shared regarding the collapse.

First, on March 24th… the day before the collapse…  workers and NJDOT noticed several cracks in the roadway deck.   They had plans to start the investigation process the next day.

They did not get that chance, as the next day the roadway and wall failed. 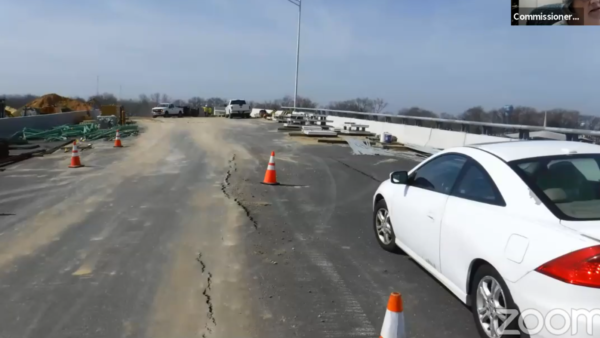 The Next Morning “Soil Failure”

Early the next morning or March 25th the retaining wall pushed out, and the roadway collapsed. 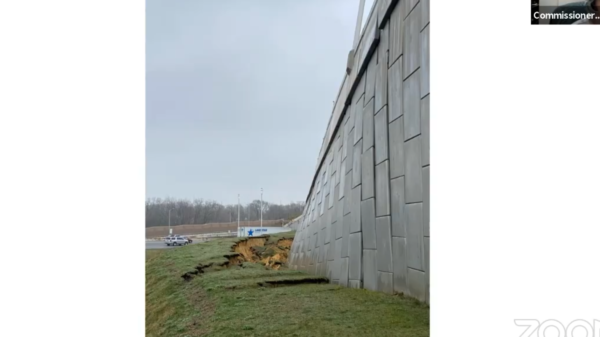 While the Commissioner repeatedly said they were still researching the cause of the issue, some of her comments could be clues to where the NJDOT thought process is leading.

The failure is where the soil just fell out that was bracing that wall up for us.  And it just let go… it is certainly what happened at the end of the day.

Sounds familiar?   42Freeway readers will note that in my first video and post on the roadway collapse, my initial theory was exactly that… that the ground in front of the wall was graded at a sharp angle which because of the thin vertical slice of ground, did not have enough reverse pressure to hold up the wall.

I had even made fancy diagrams!

Image below is from 42Freeway’s March 28th theory post 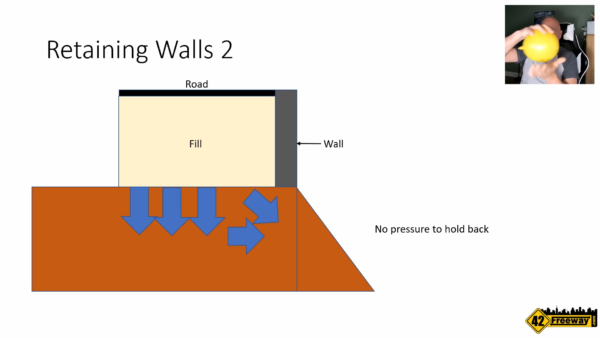 Remember this is not an official answer from NJDOT.

It was also stated later in the Question section that they are installing “Inclinometers” which are used to verify slope.

In this web article on inclinometers, they explain what they are and give examples of where they are used.

Lateral pressures on MSE (wall) systems.   Where have we heard this before?

The Wall is Coming Down

The “berm” was shown in another image, and then the Commissioner shared an image of workers taking down the wall.

What you see down here at the bottom of the picture is us trying to secure the slope, with materials that are meant to be better at securing the soil

Hmmm.. more credence to the “not enough level ground in front of the wall” theory? 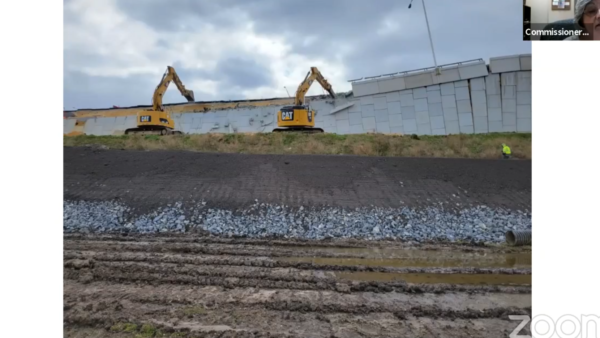 There was also discussion on the right lane of the 42N-to-295N roadway being closed… and it was stated this is a temporary closure as they work to secure the site.

Repair Expectations: They Can Fix the Impacted Portion

Commissioner Diane Gutierrez-Scaccetti then gave some insight into the expected scope of the repair.

The commissioner went on to say that they will find the secure spot via analysis of soil borings, geotechnical engineers and reviewing soil compacts.

This is a very serious collapse.  there is no doubt about it…    we were thankful that no one was hurt here.

NJDOT has looked at the other roadways over time, and are confident that this is the only area at risk.

What Caused this to Happen?  When Will We Know?

We do not have a definitive answer

NJDOT is working with the contractor, and engineers, to determine the reason for the failure.  They do not have this answer yet.

The department has also contracted a forensic engineer to assist in reviewing all the evidence of the issue, to help determine the cause.

The department does not expect this to impact other aspects of the project.

I would expect in the next 20 to 30 days we’ll have a much better idea.

Two Years Ago There Was a Similar, But Smaller Incident

While Congressman Norcross was not on the call, the Commissioner did volunteer that he told her 2 years ago there was another incident with the wall.. a much smaller incident where some of the tiles bulged behind the wall.

In the prior incident, it was stated that water had gotten behind the wall… froze… and put pressure on the retaining wall.

Who Pays For This?

As mentioned multiple times, they are still researching the cause.

That answer will point to who is responsible.

It was clearly stated that if the failure ends up being with the contractor, they will work the contractor to pay for the costs to demolish and repair the roadway.

If it was design or just “Mother Nature”, it seems that would be the responsibility of NJDOT to cover the costs.

Assemblyman Moen brought the “Who Pays” topic up again (based on resident inquiries) during the question session, and the Commissioner spent a significant chunk of time around the 30 minute mark, talking about the process of handling claims with the contractors, natural occurrences or design.

If its a contract issue or a design issue, then we will make certain that we hold them accountable.  We’re not paying for it (NJDOT).

Guys read that again “IF”    IIIIIFFFFF…  IF its a contract or design issue.

Does this extend the life of the project

As part of the analysis they will put together a full plan of repair and timeline, and that will be communicated shortly.

A topic that is near the top on my list… improving the proactive communications on the project status to the public… got a lot of commentary from the Commissioner.

I commit to you…

Several times the Commissioner used the term “I commit to you…”

In my prior post I shared examples of the Colorado Department of Transportations project communications website. While that wasn’t referenced in the call of course, I still hope we get something similar or better from the NJDOT!

She also shared success stories on a North Jersey project.. the 495 project.

While smaller in dollar volume, it is a complex high traffic road project leading into Manhattan… and she felt that project and communications were handled very efficiently.

It was stated that the 495 roadway has 1850 buses moving through it each day… and the project and communications were handled smoothly.

Now that we’ve done this and bonded over a 6pm town hall meeting, you are now stuck with me.  We’re going to make sure you are fully informed…

I do believe the Commissioner will make sure NJDOT improves the project status communications.

Well we have her on video saying she will!  And I think between the politicians involved and certain local websites, we’ll make sure that happens.  🙂

We will answer all questions

Assemblyman Moen asked about the status of the Browning Road Bridge, referencing constituent questions and the Mayor of Bellmawr (who was on the call)

As we reported previously, the Commissioner affirmed there are some negotiations taking place for additional “right of way” to give room to assemble the temporary bridge.

If all things go well with the reconstruction of the retaining wall, we would expect that the project (Browning Road) could start late May or early June.

The Commissioner’s answer was…  Well I think there was some minor confusion on this one.

I believe the question was meant to be “Why can’t the bridge be built in place, tearing it down in lane slices and rebuilding in slices.”

I in fact called out in the prior post/video that the Creek Rd bridge rebuild is being rebuilt in place…   two way traffic is maintained by simply shifting to one side.

And several years ago the Bell Road bridge over 295 was also rebuilt in place without a temporary bridge.

But the Commissioner thought the question was “Why not build the permanent bridge NEXT to the existing one and leave it there”.  She commented the need to keep the roadway straight.

No harm, no foul Commish!   You were very honest and open during the call and this was just a simple question misunderstanding.. but maybe we can get another answer soon!

The adjacent Missing Moves project was also discussed, based on resident questions.

After some conversation on the project, the Commissioner came back and stated that her staff informs her that the Missing Moves project is running ahead of schedule.

42Freeway has stated multiple times that the Missing Moves project seemed to be moving very fast!

For more details on what the Missing Moves project is, check my October post and video!

Note: if you enjoy following along with these construction projects, also check out Dan Boris’s Direct Connect website!