Well in Deptford, real construction started this week!  And in Township… they are still working on final road access approvals.   We’ve chatted with people in the projects, and even pulled an OPRA request for approval details… read on!

And I’ve learned a little about the Wawa development process.

But in the end I know everyone wants crisp “When does the building start? When do they open?”…. and most of those answers just aren’t there.  The developers don’t even know.  Here’s what I know

Before we jump into the specifics of Deptford and Washington Township, let’s take a step back and chat about some things I’ve learned about the Wawa development process.   Well maybe one key thing.  Two?

So I’ve known forever that any larger scale construction project will have many subcontractors.

I think what I didn’t fully appreciate is that the preparation of the lot for a Super Wawa, is typically a different contractor than the one that builds the building.

It starts to make sense, because there are developers who have become experts at building the core Super Wawa… and once they start, they can build them fast.

As long as they have a solid and consistent foundation to work with.

But each area that a Wawa is being developed in has a plethora of challenges to deal with.

Town approvals, Wetlands approvals, County and State approvals (when on their roads).

It can be a long and arduous process.

As an example, the Deptford Super Wawa has been in process for… damn, maybe close to 10 years. 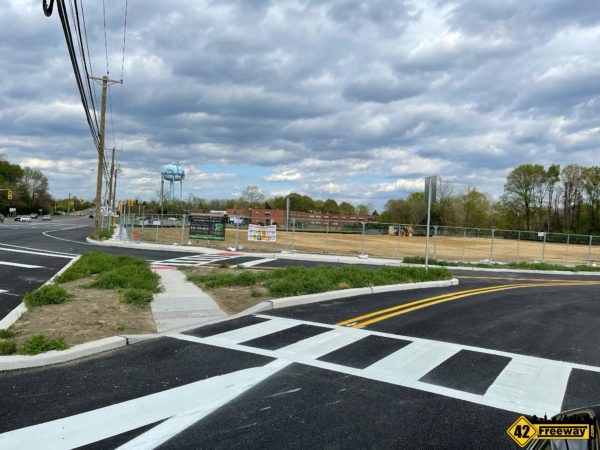 So as I see it…  the very local aspects of building out a Super Wawa is handled by one very local contractor, who later turns the project over to the actual building developer

The Contractor who gets the lot ready, can:

Then when all of that is done, they have a turnover meeting with Wawa and the next contractor, to review all of the work that was completed, reach an agreement that the property is ready for the building construction, and then they “turn over” the property to the actual building contractor.

The Company in charge of actually building the Wawa?  Well this is not their first rodeo.  They’ve built many.

They know the styles, the framework, the interior.  Everything.  Sure it varies from project to project but its all speaking the same language.

So with the property full prepped with utilities, and access roads… the building contractor can come in and knock out the construction.

Which is why this week we saw a “Wawa Coming Soon” sign pop up in Deptford.

We’ve hit that stage in Deptford.

And all of this makes it very tough for a small local news site to get a clear update on a project like this.

Remember… these are private companies… they don’t have to tell me a thing! 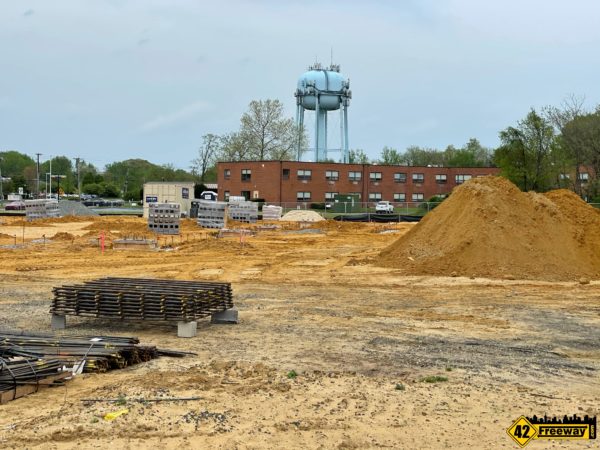 A fun twist of this is, the land and development can still be listed as owned by the original “property preparation” developer.

So even as things proceed on through additional approvals, that original developer is tagged in the government documents.

Oh.. so yeah, if you havent picked up on this…

From what I’ve seen of area projects, typically Wawa doesn’t own the property.   At least initially.  Maybe never.

Once everything is completed on the new Super Wawa, there is another meeting to see if the construction is complete… and Wawa can then take over the completed building.

And guess what?  After all of that… it still doesn’t mean Wawa takes ownership of the building.

Many times a commercial property is sold to someone else to own, along with a fairly solid lease from the new occupant.

This is called a “Ground Lease Investment“.

As an example, the Brooklawn Super Wawa currently has a tax address of a small office building in Cherry Hill.

I don’t think at any time the Wawa Corporation has owned that Brooklawn store.  Or Mantua. Or Bellmawr.

Here is an Equity Realty Brokers listing for the Brooklawn Wawa… as a ground lease investment.

So… the advantage to the building owners is they have a very solid long term tenant in Wawa, that will pay profits for a long time.

For Wawa, the advantage (I presume) is they get tax advantages on the leasing of the property instead of owning it.

I am NOT an expert on this… I guess the whole point of this long intro is “it gets complex”, and Wawa guides the store development process but really everything is outsourced… so Wawa can focus on running the stores.

So with all of that background, let’s get into some specifics.

The Super Wawa under development in Deptford is on Clements Bridge Road, somewhat across from Edge Fitness or Loews.  Well directly across from the TD Bank there.

I know I declared back in July 2020 that things were  happening at the Deptford Super Wawa site.

Well they were, not just the actual building.

Last summer was mainly the concrete crews for sidewalks and curbing.

Well I am 99.9% certain that NOW the building construction has started.  The evidence is on site.

And I’ve spoken directly to someone close to the project.

The developer of the project up to this point, is based out of Gloucester County… and it has been their job to get the property to the point that the Wawa building contractor can start their work. 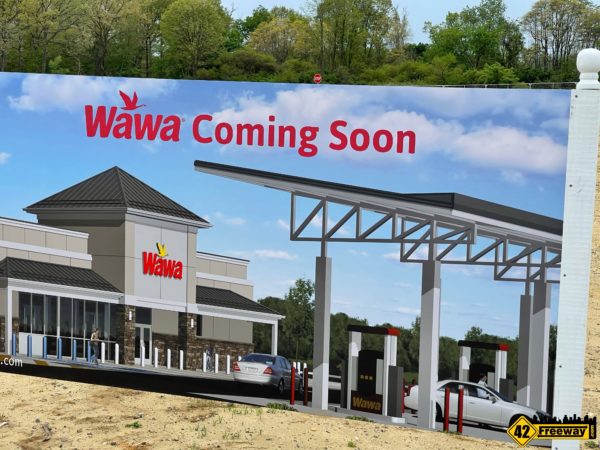 All those things I said in the intro;  Approvals, lot prep, utilities, access road and sidewalks.

It was the Gloucester County developer who worked all of this through, including the utility connections to the other side of Clements Bridge Road, and the Traffic Signal changes.

So yes, last year Covid impacted development of this phase.

And then Winter rolled in, which isn’t ideal conditions for one of the final prep steps… such as asphalt and roadway painting

Which is why the property sat for several months through the winter, until this spring.

Sometime during April, the project was turned over to the building developer, and BOOM

Up goes the construction fencing.

So to close out this Deptford Wawa segment…

I don’t know when they project will be completed, but seeing other Super Wawas go up (Bellmawr, Brooklawn)…

I think/hope/know this should move quickly now.

We should see regular and real progress.

But I don’t have a comment from the new developer, Pursell, on that timeline

Incidentally, Pursell is the developer who put up the Brooklawn Super Wawa.

The Super Wawa in Washington Township at 5-Points is being developed where Rts 41, 47, and Egg Harbor Road meet.

The core thing with the new 5-Points Wawa, is that they haven’t secured all of the approvals yet.  Specifically it seems for County road access. 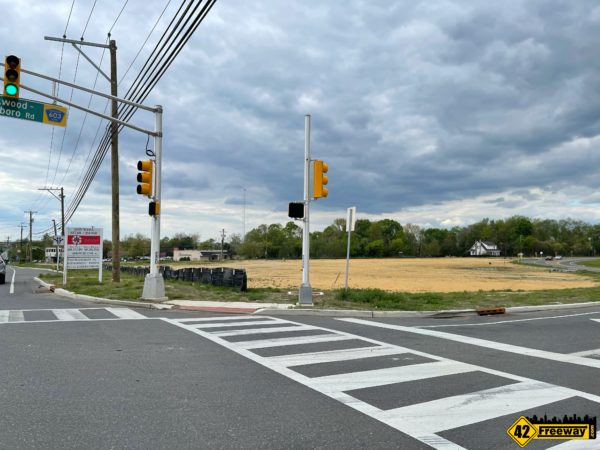 The property for the 5-Points Wawa is/was owned by area construction firm JPC Group.  They are based in Washington Township, on Blackwood-Barnsboro Road.  Their offices are just a couple 100 feet or so from where the new Wawa is going in.

See, there are many reasons why I went into all of that commentary on how contractors change during a Wawa project!  And also about property ownership.

So it seems the work from JPC Group is complete.  I had a very nice conversation with one of the JPC managers who helped give me some clarity to things.

At this point the project and final approvals has moved on to another contractor.   Ferber.

But the County documents moving through the road approval process still indicate JPC… presumably because that’s how this all started, and JPC is the property owner.

But Ferber is the company closing out the approvals for the Washington Township Wawa.

In another small twist, the project is listed as Washington Township and Deptford… as there is a small slice of the property that crosses over into Deptford.  That did confused me initially, but I digress.

So the next phase (Building) of the project is in the hands of Ferber development.  From their website it’s clear they have successfully built many Wawa Stores in New Jersey and Florida

We reached out to Ferber and got an email response:

Our team is currently working on securing all remaining approvals for this site.  We expect to begin sitework once approvals are complete.  I can’t relay any specific timeframes at this time, but feel free to check back in with me in another month or so.

So I did another thing…  I pulled an OPRA request for the county documents on the project.

What I got back from the County was 57 pages of documents, going back to July 2019!  Well much of it repeats, as its basically ongoing approval statuses.

The latest Gloucester County Planning Board Document in the pack is dated 11/24/2020.

So things may have progressed since then… but this will still help explain the process and challenges of a project like this.

The County clearly states the project is still denied (as of 11/24/20), and has listed out their core requirements needing to be met. 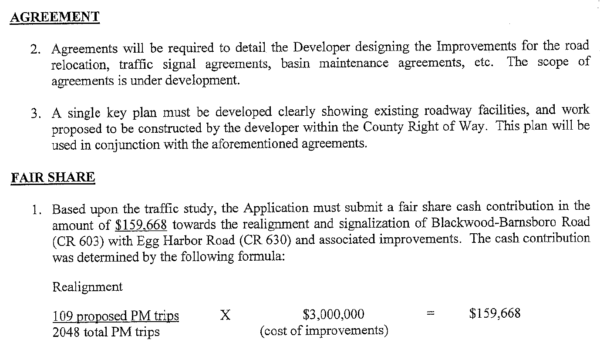 The Planning Board also added that the developer still needed an access permit from the Highway Division of Gloucester County.

In fairness, looking back through the documents I can clearly see progress has been made with the developer(s) over the last 2 years.

The bullet item list has gotten significantly smaller and smaller.

It’s tricky to understand when the JPC Group work ends, and the Ferber work begins…. as I think some aspects of both are covered by the documents.  Maybe not.

But it’s clear to me the final approval steps sit with Ferber.

I am just putting this out there.

A mile or so away in Deptford, a project is in the works to develop two large warehouses next to the landfill along Route 41.  A million+ square feet, bringing a lot of trucks and worker cars.

We wrote about the approval in September 2020, which came with a new twist.

That approval changed the core access path, to have truck traffic move through the 5-points intersection, and down 47 to Route 55.

To accommodate the traffic and larger trucks, this triggered additional required intersection changes at 5-points (requests from NJDOT).

Coming from Deptford on 41 for example, that turn to 47N will be smoothened out and with a dedicated lane, so that a truck could more easily make the turn.  This is on the Deptford side.

And it also seemed to trigger additional lanes at the intersection on Egg Harbor Road on the Washington Township side.

Simply.. to move traffic through faster, the State wants to see more dedicated lanes and clear/smooth paths through the intersection in all directions.

The moment I saw that in the presentation last fall, I wondered… well that has to impact the Washington Twp Wawa approvals, right?

So.. I haven’t had anyone confirm that the Deptford Warehouse project has impacted the approvals of the Super Wawa in another town…

… but it seems possible, right… that during the final planning steps of the Wawa road access they were told “Oh yeah and now you have to account for this” ?

Just a quick mention that in a drive by down Rt 130, I saw that the Wawa at the old Connie Mac’s Bar site looks like it is in full development gear also.

That one was initially approved almost THREE YEARS AGO!

More on that later!

I’ll slip this in at the end just to see who is reading all of this.

The Deptford Movies project is NOT dead.

It is to be located on Clements Bridge Road, down a short distance from the under development Super Wawa. 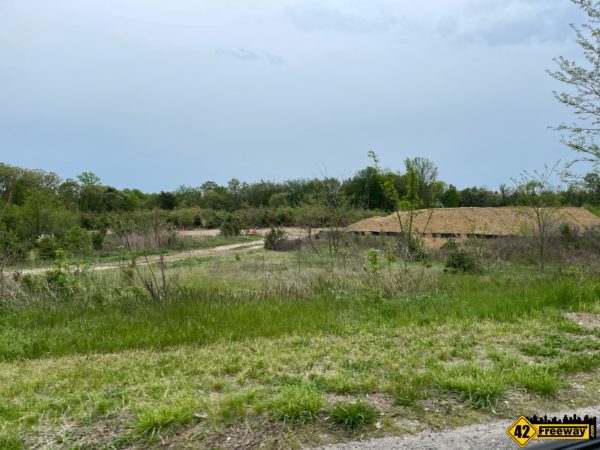 There is a large mound of dirt on the property (left over from the Wawa clearing).

People connected to the project have said the owner/developer is meeting on final plans.

And I have the owner’s cell number… just need Art to reply to my text, and we’ll hear more about his plans and timing.  🙂