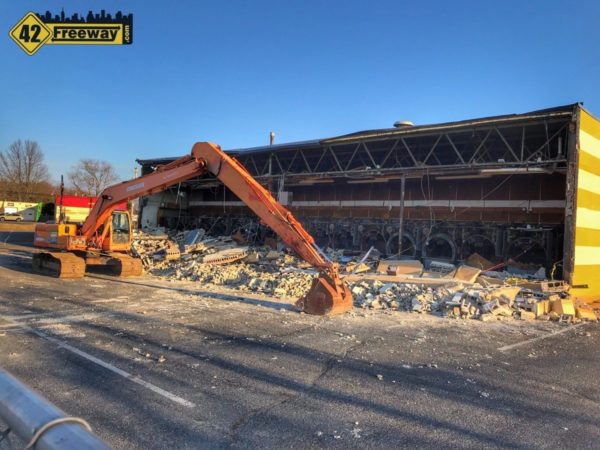 It’s had many names over the decades such as Glass Bowl, Playdrome Glassboro, Brunswick Zone, University Lanes… but regardless of the name, the long standing building on Delsea Drive across from the Monarch Diner started coming down this week.  Equipment is on site, and as of Sunday they have removed the back wall exposing the back of the bowling pin machines.  The purchaser is Matt Blatt dealerships, who currently have a dealership directly next to the bowling alley.

The May 2019 Glassboro Zoning Board minutes state that they will use the property for car inventory and employee parking, so it seems that we shouldn’t expect any new large buildings beyond property cleanup, paving, lighting and landscaping.   We also located a Construction.com page regarding the project, available only to subscribers.  This potentially could equate to a reduction of the $60,000+ a year in taxes that are currently paid on the property.

Previously we had reported that the Royal Farms Convenience Store chain had interest in the property and got as far as to ask for approval from the town.  Those plans obviously are not happening.

1961 Opening and the Liquor License Controversy

The bowling alley opened as Glass Bowl in 1961 (or close to it) and was developed by Food Fair Supermarkets, who also developed one in Cherry Hill!   While it’s very common today for a bowling alley to server beer and alcohol, back in 1960 it was a different time (closer to the 50s style of life than the free-wheeling, hippy style at the end of the decade, ha!)… anyway, in the early 60s residents found out that the town was approving a liquor license transfer from Two G’s to Glass Bowl and they fought back in a BIG Way!

Articles from 1961 chronicle the efforts which was lead by 6 Churches and the President of Glassboro State College (now Rowan)!

The big concern was people would be drinking in an area where children also visited!

In September 1961 the license transfer was approved, with some minor stipulations.

The State’s “Retail” list still shows “Glassboro Recreation” as an unused pocket license. The State can be slow to update but that being said.. I don’t see any mention in Glassboro Council minutes about any approvals to change to a new owner (which they would have to do) so I wonder if it still is sitting with the prior bowling alley owners?