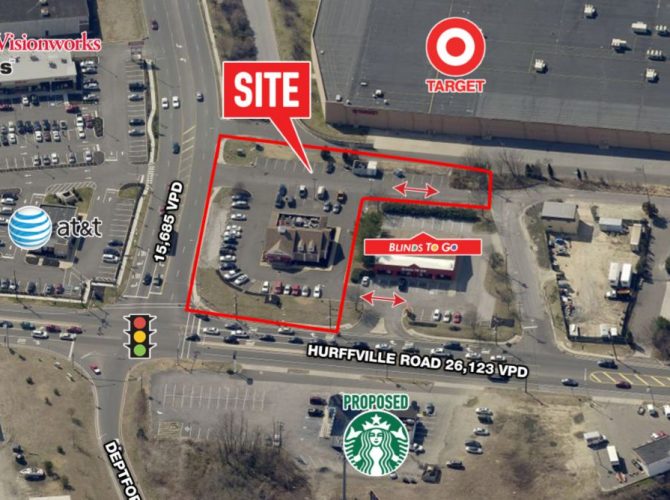 The Friendly’s Restaurant on Route 41 in Deptford New Jersey is still open and serving customers.  But since I mentioned the restaurant in my post about the opening of the new Courtyard Hotel in Deptford, I felt I should clarify my comment that the Friendly’s Restaurant on 41 (Hurffville Rd) which has been serving area families for decades, is actively being marketed for redevelopment.

I hear a lot of rumors and I stay away from most, especially when it can impact people’s livelihood and cause them concern, but in the case of Friendly’s, I found the posting on commercial real estate site LoopNet so there is no question about the fact that developers are trying to move something else into the location.

The Real Estate listing clearly shows the Friendly’s property, and the page’s attached PDF offers several potential depictions to show that the existing building could be used, but also there was room for new building construction for stores such as fast food restaurant or a bank.

This area has been getting a more attention the last few years .  While the Freeway diner has closed, there is a Starbucks and other retail still planned for the property.  The new Courtyard hotel has opened.  A new Mission BBQ opened a short distance up the road.  I’ve also noticed a property across from Forman Mills shows as “Under Contract”, and additional properties down 41 have gone up for sale.  More on that later.

The Tesla Superchargers look almost ready to roll in the Deptford Mall parking lot.  This is a larger 12 bay unit, and is located off of Boscov's... consider the space between Red Robin and Adelphia's.  They are positioned not too far from the mall and at the edge of the interior parking area, but far enough away that there shouldn't be a worry for non Tesla cars parking there.

Eagles Sunday 9:30am! Where to watch

The Eagles are playing Sunday Oct 28th in London... and its an early 9:30am kick-off. I just pulled together a list of bars in our area that are open for the game. Info pulled from Facebook!
This Post Has 0 Comments