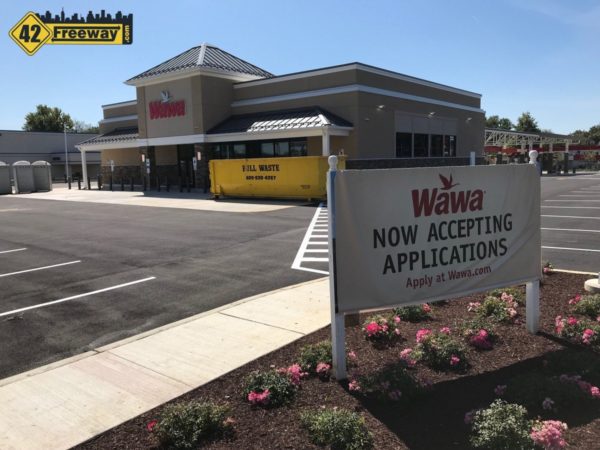 The new Super Wawa being developed in Brooklawn NJ at Rt 130 and Browning Road is scheduled to open on October 10th.  The large prominent corner was previously the location of the Metro/Ponzio’s Diner.  This has been a very well covered development as the Metro Diner was well loved in the region, and it was a significant sized building that was still very successful… which gives the belief that in the convenience store wars nothing is too far fetched.

The corner was prized by Wawa for its high traffic count, accessibility to several densely populated suburban neighborhoods… and the larger lot offered room to add the Super Wawa gas pumps.

Bellmawr Classic Wawa to Close The Night Before

Many have also asked about the nearby “classic” Wawa a few blocks away in Bellmawr on Browning Rd & Park Drive.  While many pondered “Why do they need two Wawas so close to each other”…  most of us realized the new Super Wawa going in meant the old Bellmawr Wawa was going to close.  Well we’ve learned unofficially from associates in the Bellmawr store that on October 9 the Bellmawr store will close and employees will just move on down the road to the new Super Wawa on Oct 10th.

The added twist… and unconfirmed… is that the old Bellmawr Wawa will be demolished some time after it is vacated!

Just down the road less than 1/2 a mile of the new Super Wawa is a Royal Farms Convenience/Gas store.  Overall a similar pattern as Wawa with gas pumps but where Wawa is famous for hoagies, Royal Farms is famous for chicken.

Each these two stores are positioned on opposite directions of Route 130.  The morning coffee commute primarily is into Philadelphia and Cherry Hill which is Rt 130 North, and in that regard Wawa may have a better location (hence their desire to pay a decent amount for the property).  The Royal Farms while accessible from both directions is primarily on the Southbound side may possible see more traffic in the evening.

Also to come on Rt 130 is a new Super Wawa in Pennsauken at the site of the Connie Mac’s Bar, which was recently demolished.

For the most detailed information on the Brooklawn Super Wawa project, visit the South Jersey Observer Metro Diner archive