Several posted stories and first hand accounts are painting a picture that Clementon Park…. one of our area’s iconic treasures and one of the oldest amusement parks in the country… has closed early this season and seemingly is closed for good in hopes of finding a new buyer.   So I don’t like posting unconfirmed rumors but there are several strong pieces of information out there that paint a very solid story.  I was internally debating this weekend about posting about the park, but then this morning I chatted with Jamie Messenger who runs the Clementon Fall Festival (held at the Park in October). Jamie states she was told directly by park office staff “…I was told that the corporation that owns the park has closed early and have been looking for buyers for a while, some interest but no strong definite buyers so far”… going as far to say it’s moving to bank ownership!   More on that in a bit.

A quick rundown of the information we have:

Facebook postings first brought our attention to something going on at Clementon Park, and the Screamscape post was the first “real” published information we found on the topic, but this morning we chatted with resident Jamie Messenger who for the prior two years has organized the Clementon Fall Festival in mid-October at Clementon Park.  The event was to feature a car show, beer garden, food, free admission into the park and an inexpensive $10 wristband to ride all of the rides!   Unfortunately that event was cancelled by the park within the last week, and Jamie shares her direct communications with park office staff … so we’ll start with her experience and comments.

To set the stage Jamie opens with:

Yes, this would have been our third year, we had the date set since around this time last year – park management was so pleased with the turnout they wanted to set the date asap.

Jamie and her husband run a very professional event with nicely prepared graphics, website page and social media presence.   The family runs Circle J Productions which specializes in event organization and promotion, and it’s clear they treat this community event just like it’s one of their top clients.  A lot of thought and effort goes into making this festival a premier community event for everyone and with that mindset, while we are all enjoying our summers at the beach and pool, the Messengers very early in the year have a strong eye on making the October festival a success:

We started marketing around in June/July this year and everything was shaping up to be a massive event. About a month ago, my emails to park management started going unanswered and phone calls weren’t being returned. I dropped off a huge 12ft banner to be hung on the gates of the park (just like last year) and for two weeks it wasn’t hung. I finally reached out and said I’ll have the Borough hang it.

And that’s when she was finally told what is going on… well at least to the extent that it impacts her event.  While she is choosing to not name the park personnel who told her the following, she was very confident in telling the story and me sharing it with our readers.  Jamie , her husband and other organizers put a lot of effort into the Clementon Fall Festival and she is furious that an event that brings the whole community together… and requires so much work to organize… has to be cancelled with such short notice.

That’s when I was told that the corporation that owns the park has closed early and have been looking for buyers for a while, some interest but no strong definite buyers so far. Because of this they had to let it go to bank ownership, which I believe switches over at the end of September (that’s how they’re still able to let the Crump cup parking/transportation event happen but not the fall fest) I was told I could reach out to the bank and see if they’d let me use the parking lot but most likely the answer would be no due to insurance reasons. Besides I honestly couldn’t deliver on what was advertised if it went down in the parking lot, so we have to cancel. I’m furious.

Hi everyone, I am heartbroken to announce the cancellation of this event. Despite its obligation to host the Clementon Fall Fest, the corporation that owns Clementon Park has closed its gates and are currently trying to sell. This has left us without a proper venue for this year’s event. Refunds will be processed this week. I want to thank everyone who was going to be a part of the event and hopefully we will be able to continue building the tradition of the Clementon Fall Fest next year.

I’ll add that I see this event was going to be the kick-off for the Fire Department’s holiday food drive.  They were asking guests to bring food which would be used to help those in need.

Screamscape.com is a well respected Amusement Industry news blog… started over TWENTY years ago.   While it started as a one man show, founder Lance Hart has brought in a few friends and family members to help cover the industry as well as many loyal readers who send them tips.  While there are a few core contributors it is amazing to me the amount of information they process, write and post.

On September 20th, Screamscape posted about “Something’s apparently not right with Clementon Park”.  You can read the full post here, and I will summarize the key aspects.

For all intents and purposes, Clementon Park appears to be NO MORE. But is it closed for good? Or perhaps we have to ask if the park in the middle of being sold to a new owner… or even a land developer?

On September 17th, respected Philadelphia news station WPVI and it’s Action News team did a story on a Philadelphia woman who purchased tickets to a Clementon  Park “Appreciation Day” for her and her family of 8.  They were never told of any problems with the park and on September 15th the family pulled into the parking lot to find a mostly empty lot.   A security guard informed them that the park was already closed for the season.

At the time (just a few days ago) there was still information online regarding the event, including the Park’s Instagram account promoting events into October.   While the park website is still active the web page for the event is gone.. and the Instagram account is deleted!

A Facebook user in a Clementon Facebook group used Google’s Webcache feature to find the original (now removed) page for the event!  (As soon as I locate that comment again I’ll update and give that commenter credit).    Click for Web-cached link 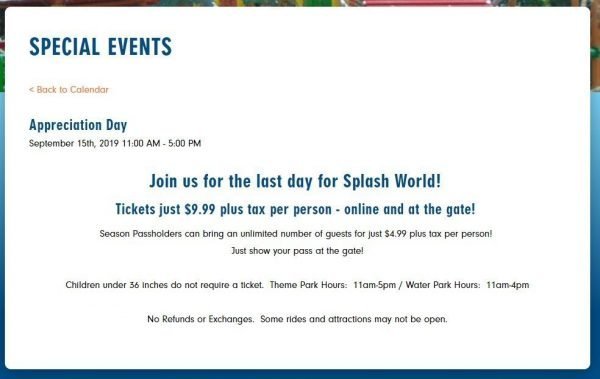 The significance of this story is it further adds credence to the story that Clementon Park has closed.

Incidentally, we discovered that the park was open just the day before (Sept 14) for a private event held by the Sheet Metal Workers Local 19.   Could their event have been the last event held at Clementon Park? 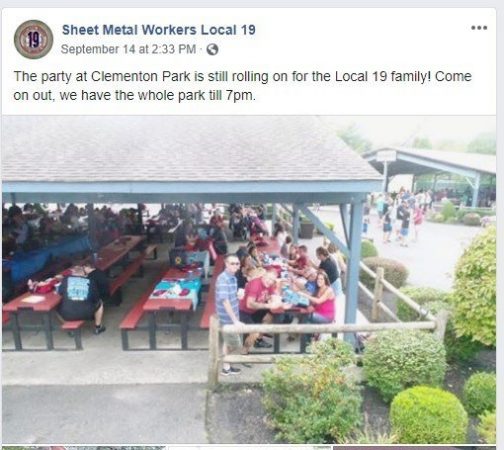 In line with the Screamscape site comments, there are several people saying the full-time staff were told on Sept 16 it was their last day, and possibly on a few were kept on to help close the park. I have not spoken to anyone directly who was in that meeting, but I have a very good friend who has a close relative who is an employee there and he shared the same story with me.  Later today I expect to chat with that person directly.

Corporate parent Premier Parks shows on their newsroom page of their website that back in 2017 they reached an agreement to sell 12 of their 16 properties in their amusement portfolio, while staying on as the parks’ operating company.  Basically Premier would continue running the parks but someone else would own the properties.

Interestingly, four of the 16 Premier Parks properties were not part of the sale agreement… and Clementon Park was one of the four that did not sell.  Is that an indication of… what?   Did the company buying the other 12 parks (two years ago) intentionally decide to skip on the Clementon Property?  If so why?  Or did Premier Parks want to hold on to it?

I don’t believe this fits directly into the closing/financial problems… but just a few years ago Clementon Park was reassessed at a higher value and correspondingly their taxes were increased significantly.  Premier Parks, the owner of Clementon Park, fought the tax assessment and apparently won the case.  Clementon and the County had to pay money back to the Park, and I see comments in the Clementon Council Meeting minutes related to this outcome.  At this time we don’t know the full cost to the town.

But obviously this was a win for the Clementon Park owners… so not sure if this matters to the story.

What does it mean?

Clearly it seems something negative is taking place in Clementon Park.   Absolutely in prior years even though the regular season would close around Labor Day they would continue to host special events for large groups and community events… and that changed this year.  Clementon Park definitely reduced their Social Media presence in the last week, and we have two stories of events being cancelled…. plus Jamie Messenger’s impactful experience directly with park staff regarding the Clementon Fall Festival.

It’s the weekend so at this time 42Freeway has not spoken to anyone at Clementon Park or parent company Premier Parks.  The CEO of Premier Parks is Kieran Burke who has worked in the Amusement industry his entire life and at one time was the CEO of Six Flags!  He is credited with creating the concept of a multi-park Corporate owned entity… and he is a New Jersey resident. Mr Burke lives in Northern New Jersey (making the story of “it was Mr Burke himself who came down to Clementon to share the bad news” seem plausible).   I tracked down Mr Burke’s address in Northern New Jersey.  I was tempted to reach out directly to him this weekend but opted against it.  Well maybe…