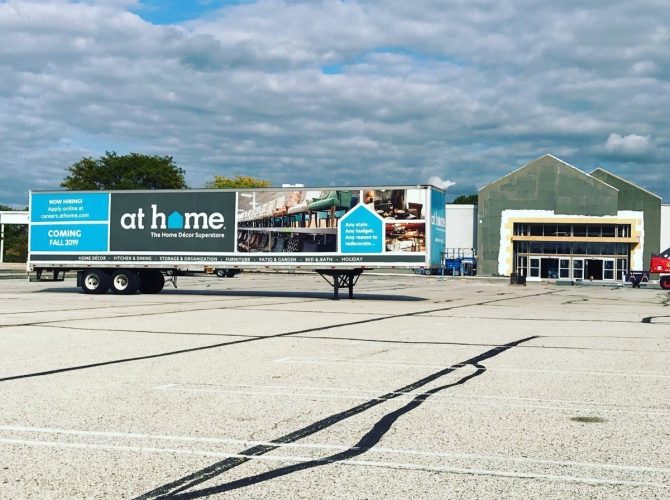 Over the last week the Washington Township (Gloucester County) Facebook page has been sharing a lot of good news regarding new business developments in town, with a large number of them happening on the Black Horse Pike!  Similar to main retail areas in other towns, the Black Horse Pike is a “mixed bag” of very successful areas, and areas in need of improvement… and the “negative” areas are a regular target of some residents on social media.

Below are the Washington Township updates as well as several other “Coming to Washington Twp” stories from 42Freeway:

At Home Store in the former The Dump building is showing its final form as remodeling efforts completely changed its front facade.  They are still targeting at Fall 2019 opening ahead of the holiday shopping season. We were the first to report on this new store (and the closing of The Dump)!   It is significant enough of a new development that we believe its a factor in many of the other positive changes.

Bear Paddle Swim School has opened in the Washington Plaza (Burlington Coat Factory center and behind TGIFriday’s).   They offer indoor swim instruction.  We hope to have more on them later.

The closed Wendy’s building has a new signed tenant, but at this time they are not known publicly!

Lakeview Dental will occupy the old Einstein Bagel building.  The building will see significant remodeling and construction should start soon!

The long closed Hollywood Tans building is being renovated for a restaurant.   Between that free-standing building and the small shopping center is open space and the owner will start this fall on a project to extend the center into that space

Del Buono Bakery is planning an outlet on the Black Horse Pike.  They own 5051 BHP which is where the Dominos Pizza is located (A property over from the Hollywood Tans center).  Del Buono’s also owns the beloved Carmen’s Hoagies in Bellmawr (where they also have a Dominos location)… so no word yet on if the Turnersville location will have a Famous Carmen’s Hoagies outlet…

Star Wash Car Wash will demolish the former Sleepy’s building on the Black Horse Pike, and develop a state of the art, unmanned car wash there.

Greentree Storage is planned for the wooded area somewhat behild Kohl’s, along “No Name Street”.  Readers noted some clearing activity in the woods.  We just tracked this down over the weekend.

Children of America Daycare and Preschool is currently being developed on the Black Horse Pike, connecting with Fries Mill Road.

Target is looking to add two additional pad sites to the front of the store.  Recently they added a building which houses Mattress Warehouse and xFinity.

Meetings are taking place for the land behind Target (Watson Drive) to determine additional opportunities.

The Mayor and Council have met with Turnersville Auto Mall leadership regarding additional improvements and expansion plans.

Fetch Pet Resort is under construction on Delsea Drive

First Watch and Chipotle restaurants are coming to Egg Harbor Road.  42Freeway was first to report on these two developments.

Rizzieri Salon is coming to a new building on Ganttown Rd next to Pat’s Pizza.   Penn will be taking over the former Rizzieri Virtua spot next spring.  We brought you this story first, back in March.

The township confirmed that activity is taking place for a new Super Wawa at 5-points!   42Freeway broke that story back in November 2018.

Factory Donuts is coming to Fries Mill Plaza. We reported that first back in June.

Dorrego Strong Cafe is targeting a late Fall opening, next to Bobby Chez.  We were the first to report on that… back in June

Fish Pond Road Medical offices are under construction!  We cleared that one up back in June after many questions.

Panda Express is still expected at the former D’eva building.  Update!  Facebook is saying construction has started!  We brought that to you first in November 2018

The town even proactively knocked down the Watson Turkey plant eyesore!

Progress is easy to see with a large new mall or outlet center.. its easy to see the negatives in a town, and miss the numerous positive things happening.