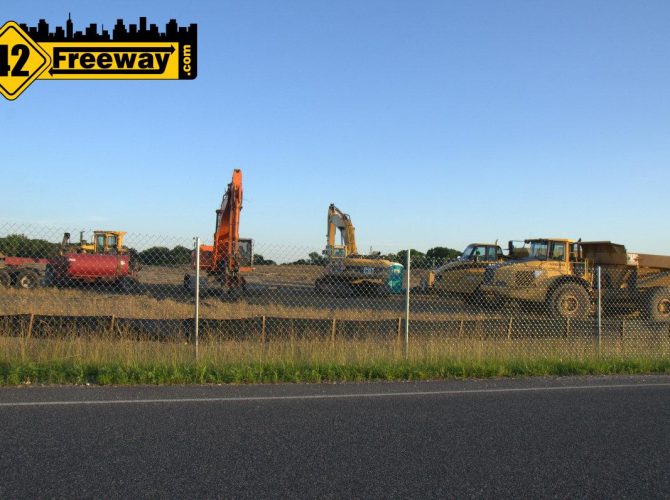 In short, 42Freeway.com is a commerce blog featuring stories on new retail developments, roadway improvements, and interesting area events all with the goal to inform and promote the towns along Rt 42.

250,000 people.  If recognized as an official Metropolitan area, the towns along Route 42 would be in the top 200, and ahead of Topeka.   But multiple towns and multiple counties can make it tough to define a cohesive region.

And while many areas of our economy are still struggling after the recent downturn, there are signs that things are turning around… this is very evident along the Rt 42 corridor in South Jersey.

From the northern start of Rt 42 in Bellmawr, to the southern-most end in Williamstown and Winslow…   business and retail construction can only be described as booming.

Primarily the site will be quick photo posts…  but here are all of the planned content types.

No Sports.  No politics Right off the bat, take away these two most debated online /radio topics.    (Well, politics where its related to a commerce change).  If you want to complain about Ruben Amaro’s direction for the Phillies, or you think your mayor is a no-show leader… well maybe I care a little, but this isn’t the place for it!

Lastly, who am I?

I am Mark Matthews, previously a resident of Bellmawr for most of my life, and recently (2014) we moved to Deptford NJ.   I was a community blogger for several years writing about the towns surrounding Bellmawr, with a strong focus on Bellmawr and the landfill (much of the information about the Bellmawr landfill that made it to the public came from me).  I’ve blogged for the Courier Post, as the Bellmawr Blogger, and most recently Cleary’s Notebook.

I’ve jumped around a little, but 42Freeway.com is the first time I’ve had a consistent theme.  It’s a subject matter I truly enjoy and with the move to Deptford… it all just clicked “hmmm this could be a pretty good idea”.   We’ve settled into our new home and I’ve cleared most of my free-time schedule, so now its just a matter of posting…  a key element.  🙂

Gloucester Township continues its own streak of big openings, with the long awaited Tilted Kilt restaurant opening on Monday, October 5th at 11am. 42 Freeway was there for the VIP preview party on Saturday, and we have the exclusive preview photos of the beautiful restaurant and servers!

A Sherwin Williams paint store is coming to Cross Keys Road, close to the Black Horse Pike and in the same small center as Pho City.   Close by are Sam's Club and iHop.  This exact store location was previously a Mattress Factory.

The recently closed PB's Diner will soon see new life when it reopens as Monarch Diner, with backing from the team that brought us the Lamp Post Diner
This Post Has 5 Comments