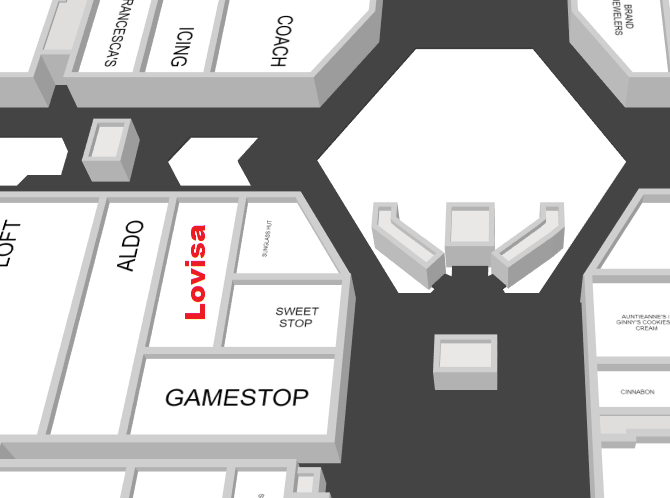 Australia continues its Deptford Mall invasion with the the planned opening this fall of Melbourne based fashion jeweler Lovisa, who is planned to open for the holiday shopping season.  We recently posted that Australian based Cotton:On was also joining the mall.   Related to the mall, we had also learned the opening date of the long-awaited Round One bowling/arcade center, but then immediately found out that while they still plan to open this fall, they have shifted the date back from their original opening plans due to Covid-19.

Just yesterday New Jersey Governor Murphy gave strong indications that indoor dining will be approved ahead of Sept 15th… which would probably be the catalyst to open both Round One in Deptford and Gloucester Township’s new Dave & Busters.

Lovisa will be taking a spot on the second level, close to center court… between Sunglass Hut and Aldo (as confirmed by Mall management).   Coincidentally they will be directly above the new Cotton:On store.

Lovisa is a fast fashion jeweler.  Some have categorized them as costume jewelry.  In a 2014 Sydney Morning Herald article, CEO Shane Fallscheer described the store as:

“Typically our customers are buying our jewellery to wear for an occasion in the next seven to 10 days and they’ll wear it once or twice and it will end up in their side table drawer, never to be seen again,” said Lovisa founder and chief executive Shane Fallscheer. “Hence why we turn products over – it’s buy now, wear now and move on.”

The “fast fashion” refers to their ability to notice new fashion trends in the industry, create their own versions quickly, and with international suppliers can have a product in the stores within 6-10 weeks!

A 2016 article in the Financial Review says they have over 15,000 pieces of jewelry in store, and they introduce 100 new designs on a weekly basis.  This constant stream of new product is aimed at bring people into the store on a regular basis, which is also a big plus for the Deptford Mall.

The stores are not large so the build-out of the now empty store into Lovisa should be quick, and as mentioned…  mall management is hoping for an opening this fall to take advantage of the holiday shopping season.

The long awaited Round One bowling, arcade, karaoke, bar (which has been heavily covered here at 42Freeway) which looks ready to go in the upper level of the former Sears, is also targeting an opening ahead of the big holiday shopping season.   In fact, we were all set to post an opening date of October 3rd, but then we spoke directly to the Round One marketing team who said:

Also you mentioned that you found our opening date but most likely we won’t be able to open on that day. If you are planning to include our opening date in your article, please put ‘Fall 2020’. Unfortunately due to COVID-19, everything is unpredictable and we would like to avoid giving wrong information.

We noticed that a planned on site job fair was also cancelled, but Round One does still have job postings online.

We can assume that Covid’s impact on the opening is that they would prefer to have indoor dining approved first in the state of New Jersey, which is what we were told by Dave & Buster’s management just last month.