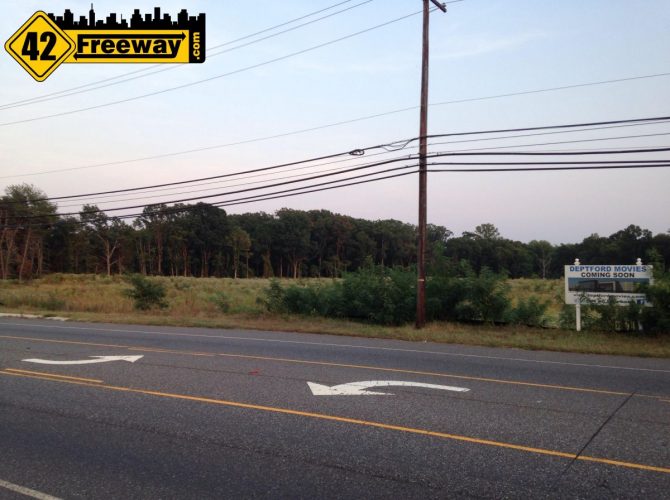 On the docket for the May 9th Deptford Planning Board meeting, is a hearing/presentation and request from the Deptford Movies (Theater) developers to request minor changes to their previously approved plan (from 2014), for their large property located on Clements Bridge Road.  It is also stated that they are requesting final plan approval.

The key take-away is; the developers must be serious about building the movie theater in the near term, as they would not be appearing before the planning board for these adjustments four years after the original approval.

The proposed usage states a movie theater with 776 seats, a restaurant building, and a smaller mixed use building.  The unnamed restaurant will include an outdoor cafe seating area.

While I don’t have all the details, it seems the requested adjustments relate to the number of parking  spaces, landscaping and other similar factors.

My belief is, this is the stage where the developers have sharpened their plans to start the actual development process and have the final refinements worked out. On the other hand, we’ve seen many projects get to the final approval stage and then nothing happens for years.  Like this one in 2014, ha.

The Deptford Movie project made frequent news several years ago as all indications were it was ready to be built… namely the clearing of trees.  Then the property sat with no additional activity.

Later, 42 Freeway broke two stories related to this project.  One, that the Movie property owners were negotiating with a large medical facility interested in taking the property over.   Second, 42 Freeway discovered that the Inspira Health/Hospital group purchased the adjacent 30 acre property.  Other stories contributing to the rumored delays were attributed to lawsuits from area property owners.

The property in discussion is located in Deptford New Jersey, on Clements Bridge Road.. across from the shopping center which used to house a Pathmark Supermarket (Which recently became an Edge Fitness).

It has been stated previously that the theater is expected to be a state-of-the-art facility. No information is available on what the planned restaurant would be, but 42Freeway has researched available liquor licenses in town, and we are aware of only one not in use which would indicate a non-alcohol eatery.

The public planning board meeting is: