The 2020 Summer beach season has ended, and with that Wildwood Crest has started a project to upgrade Sunrise Park, a three block long public park along the beach.  The core plans include a shaded play area, an outdoor gym, benches, bike racks… and a SPLASH PAD!  This plan represents a big change from the original proposal, a change which was driven by resident feedback!

We visited the property this past Monday, September 28th and in the video below we give fans of Wild Over the Wildwoods a first-hand tour of the project!  Well, we’re going to overview it here also… so you can read on, or watch the video… I suggest both!  But yeah.. I wrote to much here.  Glance over this and watch the video.   🙂 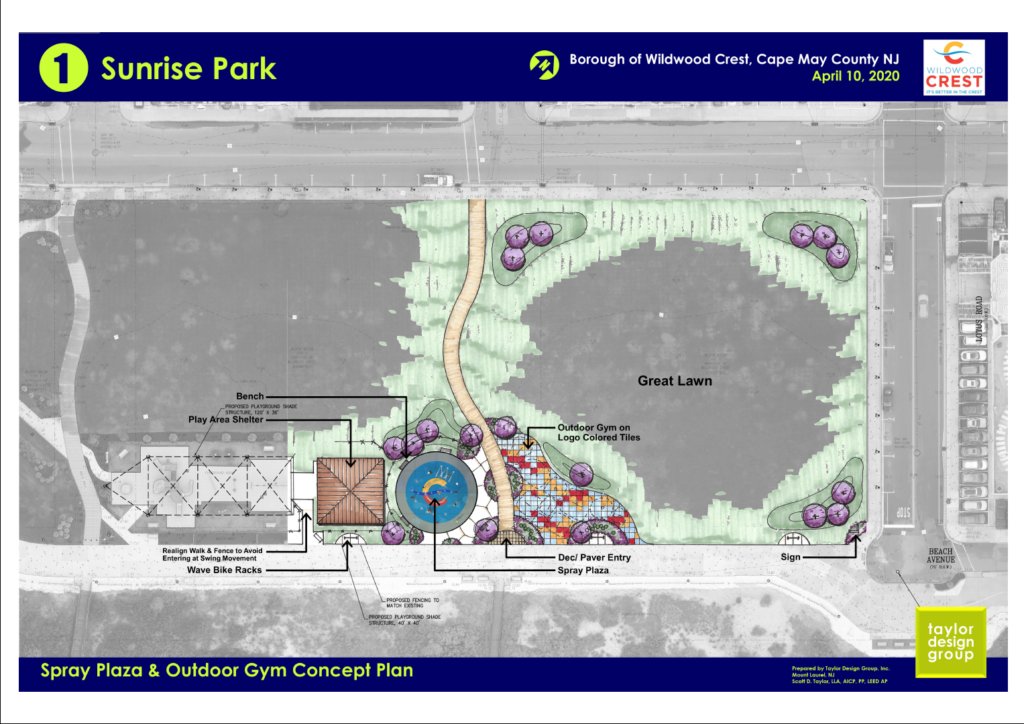 Sunrise Park is located along the beach edge of Wildwood Crest, starting at the Southern end is Rambler Road and ending 3 blocks North at Lotus.  The idea of “three blocks” is carried through into the park via two wavy sidewalks which extend from the cross streets (Primrose & Myrtle) to the bike path and beach, which provide access to beach-goers.

This first (southern) block at Rambler Road is very well known as it is where the Bradley’s Bike Rental is located, with the bike statue is next to it.  Continuing the bike theme, Rambler Rd starts the beachfront concrete portion of the bike path.

Also located in this block of the park is a center gazebo, surrounded by grass lawn.

This most southern block does not have any improvements coming in this project.

The center block of the park currently hosts the core kid’s area, a playground with a multi-slide/climbing station, a swing area, and other smaller child playground items.  This playground is positioned on the most southern corner of this block, and the significant portion of the block is grass.

The new Shaded Play Area is under development directly next to the existing playground, along the front edge of the bike boardwalk.  It will be positioned close enough to the current playground that it will share the existing entrance sidewalk, with some modifications to the playground fencing.

The shaded play area is a square structure with a pyramid-style roof, with an open air design similar to a gazebo.   At this time I am not clear on if there are additional features provided in the design, inside the structure… or its a free-from play area for children and families to bring their own fun!

Still in this center block of the park and next to the Shaded Play area, is what will probably be the most significantly noted feature… a splash pad!   If you aren’t familiar, splash pads are water features for children where water nozzles in the ground shoot water streams up, for children to umm.. splash in!

In the video I say “splash pond” and “splash pool”, but that’s not really the correct term.  My Bad!  Typically the design is done so that water does not “pool”… as the splash pads are somewhat level with the ground around them.

Now moving over to the third, most northern block of Sunrise Park, is another significant feature… the Outdoor Gym.  The layout will span across the “corner” of the path that extends Myrtle, and the concrete bike path.

The gym area will be tiled in colors matching the Wildwood Crest theme… shades of orange and grey.

The site plan diagram has some lines depicting activity equipment for this area, but that is still for us to discover in future updates.

But that’s not all!

Surrounding the splash pad will be several benches.

To better accommodate visitors from the bike path, there will be multiple bike racks across the front of the center and north block.

Landscaping improvements will be placed around all of the new attractions, and it seems the corners of the northern block will have more significant landscaping.

One thing to be clear about… even with all of these new additions, there is still a significant amount of beautiful green lawn!  All of these new attractions are positioned across to beach side of the park, leaving the largest part of the park a green grassy oasis

One Thing Was Dropped From the Project:  Parking Lot

One item that was in the originally presented in plans, was parking.  Due to citizen feedback, this was dropped!

On the long end of the park (parallel with the beach) is Ocean Ave, and in the original presented plans a parking area was included… basically a single long row of parking along almost the entire length.

The implementation was to going to provide a single entrance at the south end, and a single exit at the north end…  and an interior road connecting the two.  Cars would pull in and turn left into parking which would run along Ocean Ave.  Looking at a diagram post at Wildwood Video Archive, this would’ve provided for approximately 38 parking spaces.

BUT!  Local residents did not like the idea of a big chunk of their beautiful green park being converted into asphalt!

We caught up with two residents who told us that during the off-season presentation, a large number of locals came out to the meeting to learn more, and then state their displeasure with the parking plan.  The Wildwood Crest meeting minutes show a dozen or so residents got up to speak about the park, and specifically the parking!

And it didn’t take long for the Crest leadership to remove the parking lot from the plans!

With the town actively working on the project, it will be completed this fall.  Of course the Splash Pad won’t be operational for swimmers… but I would expect the shaded play area and outdoor gym to be available for residents and visitors!

Check out our video walk-through below!