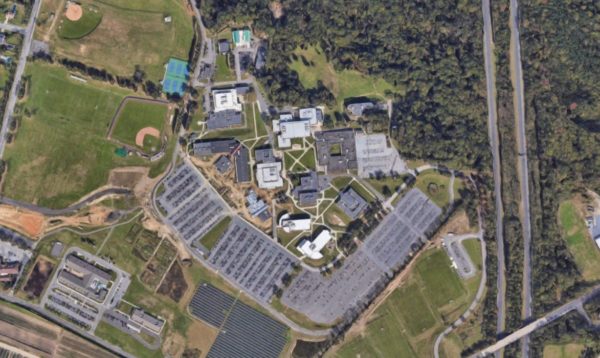 The May 8th Deptford Planning Board meeting will have representatives from Rowan College presenting and asking for final approval on the first of a multi-phase expansion to “construct a new 56,545 sq. ft. multi-story Rowan Medicine Center and a new 15,633 sq. ft. single story Economic Development Center”.  It is a believed this will also include an Urgent Cafe center which will be available to the entire community.  Rowan College is located 1400 Tanyard Road, Sewell/Deptford NJ

This is the start of a multi-phase project to expand the former Gloucester County College into a larger, and more community integrated higher learning institution.  Future plans call for student housing, additional multi-use buildings, and if the earlier phases prove successful there is a possibility for a retail component to be added.

Back in March 2017 the College presented their plans, and the Philadelphia Inquirer covered the story.  From their article 2 years ago:

“Community colleges are commuter schools. What we’re proposing is to change that paradigm,” Frederick Keating, the college’s president

The first phase of development would expand the school’s health programs, working with a local hospital system to bring an urgent-care center to Deptford Township and increase student enrollment in nursing and allied health disciplines.

“All of that helps Deptford Township. It brings the right kind of business here. It expands us out of the retail world and more into the medical world, which is what we’re trying to do,” Medany said.

It seems based on the prior quotes, the final plans for the medical oriented building are larger than originally anticipated.

This continues Deptford’s push to move its value beyond being a retail powerhouse.  Deptford recently added the impressive Nemours Pediatric Health Facility on Almonesson Rd,  an Inspira Multi-use medical facility is planned for Clements Bridge Road… and as mentioned in this post, the Rowan College is moving towards becoming a hybrid higher education school as it will be positioned as a Community College priced education experience but in the future include University features such as student housing and potentially retail.

The prior Inquirer article describes that the future projects will be developed in a private/public partnership similar to what has taken place in outer areas such as Rowan University in Glassboro.

RCGC would own the land, but would spend no money on the development. Nor would the town or county.

Later this year the Cumberland County Community College will merge with Rowan College, and the College will be presented as having “two campuses”.

Unfortunately it’s been difficult to get the previously proposed plans from online sources as the Gloucester County Improvement Authority updated their website and all of the links to the proposed upgrades (2 years ago) do not work, and I could not locate on the Rowan College website any information on their site about the highly publicized plans.   Adding to the fun I won’t be able to attend the planning board meeting on May 8th.  That being said,  I should have the proposed plans in my hands prior to that and will post an update.