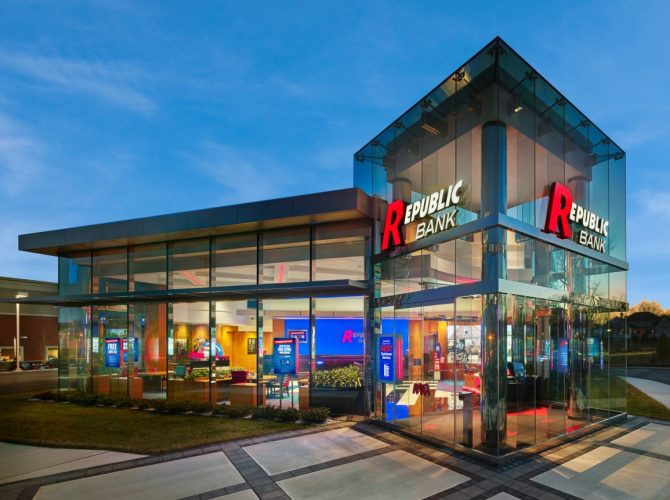 The April 4, 2018 Deptford Planning Board meeting brought out several representatives from Republic Bank, a regional bank with a distinctive glass store… which has been on a growth spurt the last few years.

The location for the bank will be a stand-alone building in the Deptford Mall parking lot, in the far South-West corner.  Since we are all familiar with the mall and surrounding stores, the corner is across the street from the Outback/Bonefish restaurant.   For the bank, this is a great location with a lot of cars, and the traffic coming off of the Route 55 exit… and those drivers waiting at the light will basically be staring at the bank on the opposite corner.

Republic Bank was founded by Vernon Hill, a famous South Jersey resident who developed the popular Commerce Bank decades ago, which he later sold to TD Bank.  Mr Hill started many customer friendly features such as extended hours and coin counters.  After several years out of area banking, Mr Hill came back to start Republic Bank.

The bank stores are very prominent in their locations, featuring a modern and mostly glass cube design.   Stores are in place throughout our region including Glassboro and Washington Township, and a new location is currently under construction on Blackwood-Clementon Road (I still haven’t posted on that one!)

I sat in for a portion of the Deptford presentation.  Republic has standardized on a store design which features a significant amount of glass, and for them building new stores is a fairly routine process.   The “cube” entrance of the Deptford location will face the intersection, and it will house the ATM machine.  The 3 drive-thru lanes will be in the back of the bank on the mall side, with cars lanes being parallel to Deptford Center Road.

Two minor twists I heard are, they wanted two new entrance/exits closer to the bank’s corner to facilitate easier direct access for customers into their area of the bank.  Almonesson Road is a County road and they appear to be against another exit there, but the bank would still want a new entrance into the bank/mall area from Deptford Center road (Right turn in only) as they believe drivers will notice the bank after the existing traffic light coming out of Christmas Tree Shoppes, and miss the bank if there were no new entrance.  The property is actually part of the Sears Holdings property with only a very small amount being owned by core mall owner Macerich.  Parking for the Republic bank will still be connected to the mall parking lot, but they will be adding raised landscaped areas to create a sense of it being a separate property.

It was getting late and I had to leave before hearing an questions from the board, but considering this fits into existing zoning an usage… while their be recommendations and changes asked for… I would be very surprised if this project doesn’t move forward. 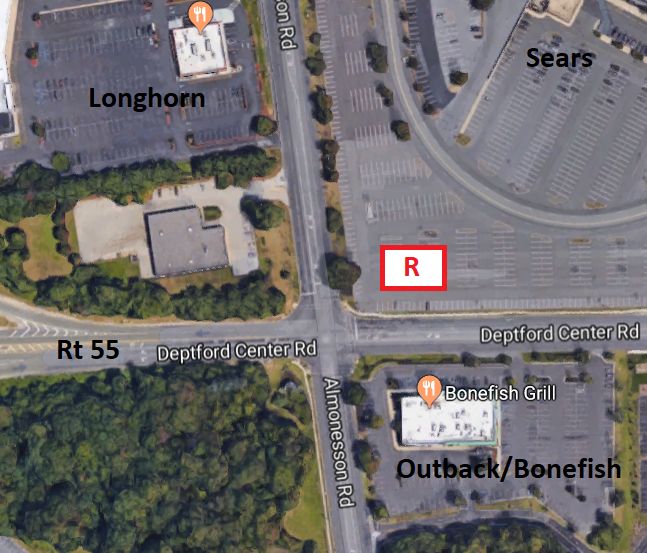