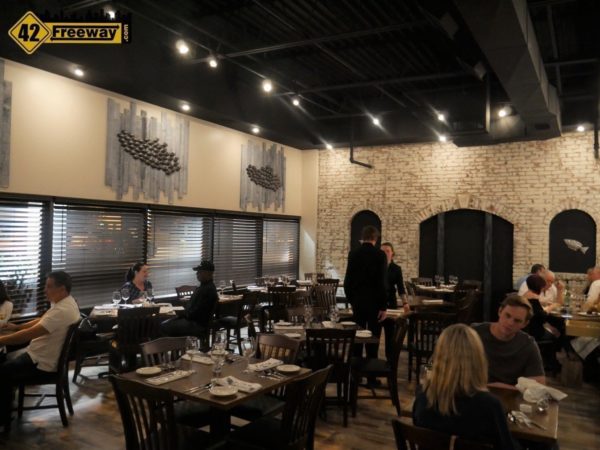 The long awaited Pesce Ristorante on Egg Harbor Road, Sewell NJ (in the Acme Shopping Center) has opened for dinner!  Lunch service will start in a few weeks.   They are open today for Mother’s Day with no reservations needed… and with what they say is a limited menu, but from what I see it looks extensive to me!  Right now they are open every day for dinner 5-9, and they plan on adding lunch service in the future.

42Freeway stopped in late on Saturday to check out the new BYOB eatery, and chat with owner Connie Macina, her daughter Samantha (General Manager) and team, including Connie’s sister.  The entire family has roots in Washington Townpship!   They’ve already had a very busy Friday and Saturday dinner service, and I fully expect the 42Freeway fans to stop in for dinner and keep the early success rolling. The location is the former Macaroni Grill at the far other end of the Acme Shopping Center.  Connie and team have done an awesome job with remodeling and freshening up the place.  There is a distinctive brick wall feature, a raw bar, and in the future it looks like private outdoor seating could be in the place.

Connie spent many years in the restaurant industry including the well loved Pub Restaurant in Pennsauken.  She had taken some time off for parenting and family, and when it was time to get back into her career again, she choose to start her dream restaraunt… Pesce Ristorante! On the 42Freeway FB page I see lots of comments about the Washington Twp dining scene… while everyone loves the amazing traditional Italian offerings that the area provides, there are many who are looking for something new and different (as is evidenced by the cars filling the parking lot over at Salsa Fresca).  So while Pesce definitely has it’s roots in Italian cuisine… if you had to describe it in one word it would be “Seafood”.  And in fact, “Pesce” means “fish” in Italian!  But as you would expect, there are other delicious offering of steak, chicken, veal and of course… pasta!

The raw bar is prominently places just passed the entrance, and sets the tone for the dining direction! Taking a look at their Mother’s Day menu (posted on FB), here’s my rundown of the offerings… which will really give an idea of what the restaurant is about.  They have very crafted and detailed item descriptions for everything and I am just presenting a summary.  There is much more on the menu and they are still evolving and growing it!  Stop in or check out their Facebook Page!:

And to cover all the food options, they also are offering:

Pesce is a great addition to a growing Egg Harbor Road area dining scene, and other restaurants are coming to offer diners even more choices!

The 42Freeway Influence Grows!  Thank you! When I stopped in I was greeted at the door by General Manager Samantha who immediately gave me a big smile “You’re the 42Freeway guy!”  It’s awesome to see people are really enjoying the site, and the enthusiasm I see from them and the compliments are very much appreciated.   So just minutes later I walked around to the side dining area and an area Washington Township family was there “Hey!  Your Mark from 42Freeway!”.  Awesome to hear they were big fans of the site and as we talked… they were following along with the posts and trying out the new places!   I was a little caught off-guard by the one-two punch of being recognized… so my apologies to that family for my awkwardness and not catching your names!  🙂

Then later Saturday night I received a message from one of the people involved in the new Pet Check Urgent care going in, and they were ecstatic by the attention the 42Freeway post received, and they were at Washington Township’s Super Saturday event and they were amazed how many people mentioned seeing them on 42Freeway.  (BTW, the Pet Check post has been seen by over 20,000 people on FB, and over 300 people shared it to their pages!)

And lastly.. I am hearing there has been a good bump of diners over at the Wing Kitchen at the Wedgewood Country Club since I posted on them.  I plan on stopping back in very soon to try out their buttermilk chicken tenders which the fans on Facebook commented about!

I can’t thank you all enough for reading, sharing and interacting with 42Freeway!   We all make a great team!

Currently open for dinner at 5-9 but check their Facebook page for updates on menu and hours!

4 thoughts on “Pesce Ristorante has OPENED in Sewell/Washington Township! Seafood, Pasta and More!”