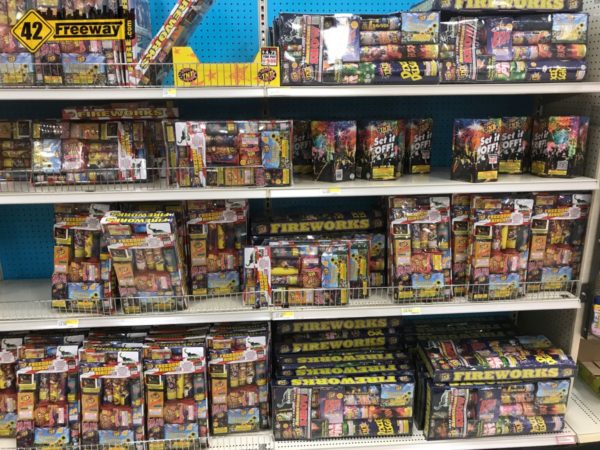 I was walking through the Deptford Target this afternoon (the day before Independence Day) and there they were… an entire display of firework packs and large ground fireworks!   This is in NEW JERSEY!

So New Jersey Governor Chris Christie, right before shutting down the state and taking the family on a nice outing on a deserted state beach, signed a law legalizing the sale of some fireworks in New Jersey!   If you caught it on the news, it seemed it was aimed more at “sparklers”, the hand held incense looking sticks.  In reality, it legalizes non-launched fireworks which emit sparks.  Why this is significant, is this allows for those tubes and boxes you sit on the ground, and when lit put out a mini fireworks show.  Some of the firework boxes are surprisingly large!  VERY large.

What is not allowed are rocket based products, and firecrackers.   Well, I am not an attorney… so read the news and legislation to make your own determination.

I have to admit it felt very strange to buy any type of fireworks in New Jersey, let alone in a mainstream national store like Target.  It’s also going to be weird tonight lighting them off legally in my yard.   I’m not lighting these on the “down-low” in the back yard.  Nope.  We have a large front yard and I am lighting them off right out front… almost hoping that a neighbor doesn’t realize these are now legal. Ha!

In the Target cash registers, the cashiers can’t even ring up your firework purchase unless they scan in your driver’s license and it proves you are 21 or older.

If you are looking for the “bigger” fireworks… well they are available just over the river in Philadelphia.   There is a strange loophole in the fireworks law in PA.  Years ago someone realized that while the Pennsylvania law makes it illegal for PA residents to buy fireworks, there are no laws saying they are illegal to sell.  Well, that’s at least the way it was a few years ago when I stopped into a permanent fireworks shop close to the airport.  At the checkout they would take a copy of your license and as long as it was Pennsylvania you could buy from the entire gamut of firework offerings.  I’m not sure how this works today, as around this time of the year there are temporary fireworks stands popping up all over Pennsylvania.

This manufacturer’s web page has a video of the large “Set It Off” firework I purchased.