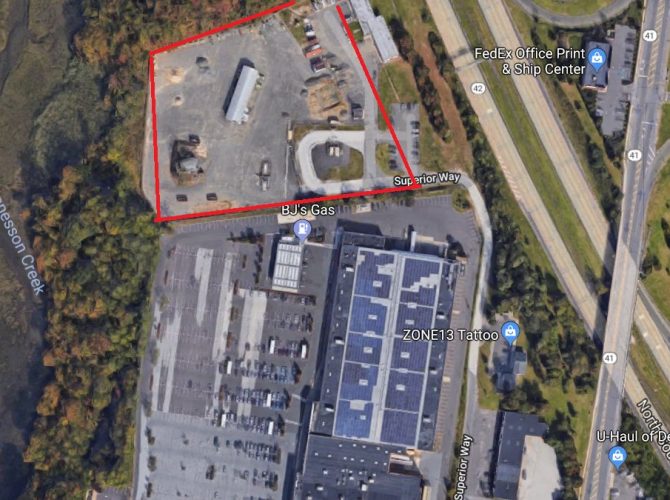 This story starts with a small mention in the Deptford Planning Board minutes from earlier in the year, but this simple story has many tentacles.  I actually was at this meeting but arrived a few minutes late to catch the discussion, so I am relying on the Board’s meeting minutes.  Deptford does a great job with the minutes, but they aren’t able to include in the minutes the drawings and other documents (like Gloucester Township does).   PDF

So the main story is… well, if you’ve been to the BJ’s Wholesale Club on Deptford Center Road, at the very back of the lot just passed the Gas Station, is a maintenance yard.  You may have noticed the large storage tent building on the other side of the fence.  That facility is actually a NJ Department of Transportation Maintenance yard.   Access to it is from the road behind Target/BJ’s.

The State is looking to move and/or expand, and they are targeting to go a little bit up Route 41 to the very large 34 acre “Haddonwood” property.   The current maintenance yard next to BJ’s has been going through environmental remediation, and it seems that when the NJDOT moves out the property will be made available for development.  There is no indication at this time if there is anyone already interested in the property.

Looking at Google maps satellite view, the current property is actually deceptively large… seems to me its about as big as the area taken up by Target and its front parking lot.

Haddonwood was a large indoor/outdoor tennis facility in Route 41, which also included full gym facilities including an indoor pool.  To make it easy to understand the location, where the Speedway (Hess) gas station is, it is all of the woods that surround the gas station back to the Big Timber Creek.

There is a lot of history with this property in Deptford even after Haddonwood closed, with a national news making “David and Goliath” story involving local residents and Walmart (who wanted to build there) back in 1996.  Secondly, in what I think will be the biggest surprise to Supermarket starved Deptford residents… back in 2006 not only was another shopping center planned for that location, it was to include a Shoprite Supermarket, and get this… to this day some 15 years later, the Brown family of Brown’s Shoprite still owns the property (after paying $2.3 million for it in 2003) but eventually decided to not build a Supermarket in Deptford.

I have access to a global news database of newspapers and I’ve read many of the articles about the Haddonwood Walmart and lawsuits.  In the early articles, people being interviewed were saying they didn’t want it because they didn’t want to lose their beloved fitness facility (it was closing regardless).  Later on the 100 or so homes directly across from the proposed Walmart who won the fight to block it (based on improper zoning changes), cited the traffic and poor road conditions.

Developers and town officials said the development would improve the roads, and with the Home Depot also being recently approved… it would turn Rt 41 into a functional commercial shopping district.

The Loopnet.com commercial site listing is still online 12 years later, and it got as far as being designed and submitted to the state to be reviewed for Environmental impacts (proximity of Big Timber Creek), but it was obviously never developed.  The property drawing below was submitted as part of the environmental filing.

So obviously nothing was built, and the Brown family has been paying the property taxes (currently $5,000) on the undeveloped land for 15 year.

It’s important to note the disparity in the global financial situation between 2006 and 2007   In 2006 the US and global economies were flying high… money was being lended freely, everyone was buying big houses and development was booming   Then a year later in 2007 it all crashed…lending money dried up as massive banks failed and consolidated   Nothing’s was getting built for several years.

I had a chance to chat with CEO Jeffrey Brown (via social media) on the property and he unequivocally said about the Haddonwood property “With all the Walmarts in the area, it doesn’t work for me to build another grocery store” 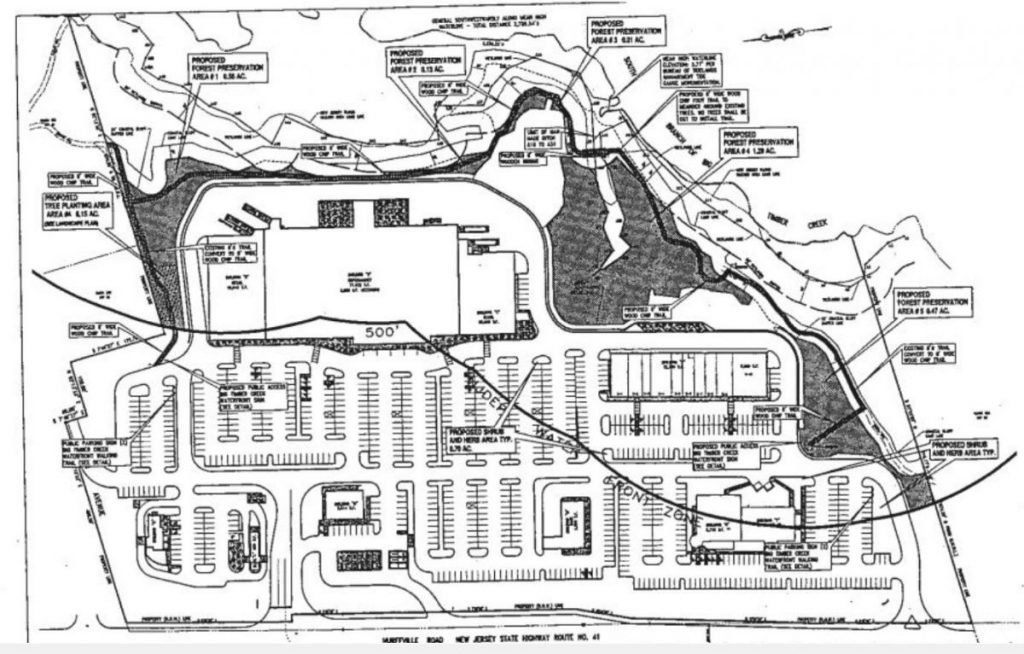 So now I am a resident of Deptford and I live off of Rt 41, but down near the Seven Star Diner.  So I drive this stretch of road almost every day on my way to work and I wonder… are we better off?  Are the residents better off without that Walmart?   Is it possible that if the Walmart were built at Haddonwood the area would have improved any more?  With the Home Depot property coming right after the defeated Walmart would the retail growth connected on down Rt 41?

Simply: Are the residents and the area in general, in better shape now with an NJDOT maintenance yard being planned?

I’m not sure but I do feel that while I wouldn’t want a Walmart there… I also think there are much better uses for it than a state maintenance yard.  I get there are tons of light industrial businesses along rt 41, but is that what we really want?

Maybe one day soon I’ll do a commentary video on the property.