Deptford MASSIVE Warehouse Project Planned Off of Rt 41. ONE MILLION PLUS Square Feet. 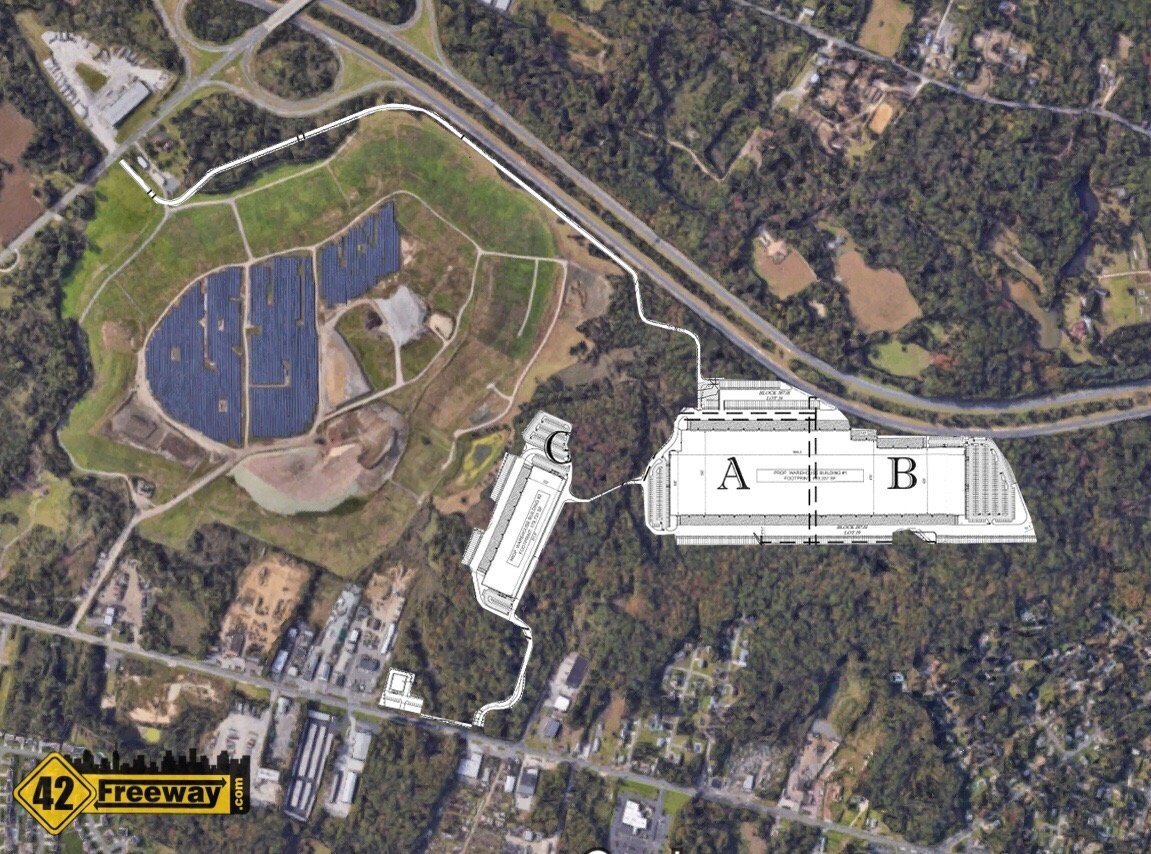 (Note: Overlay image at top of article was created by 42Freeway using submitted siteplans and Google Maps.  Placement and scale may not be 100% accurate, but are really close!)

Several weeks ago 42Freeway learned that new Ohio based owner of 100+ acres in Deptford Township located off of Rt 41 (wedged between the landfill, 55 and 41) is working on a massive 2 warehouse building project;  the largest is almost 900,000 sq ft and the second is close to 200,000.   We’ve held off on posting until now as we filed an OPRA request with the Gloucester County Planning board to get the proposed sketches, which we share with readers here.  I have the full set with additional details and I present the keys ones here.

When I first heard about this project, I assumed they would be going in on the land around Rt47 towards 55, where years ago a large retail development was planned but recently they sold off their liquor license.  But.. I was very surprised to see the warehouse project being proposed in the Rt 41 area, which has some residential housing nearby.

The plans that we have show the larger 890,000 sq ft warehouse along the back of the property (very close to Rt 55), and the second warehouse of 179,000 closer to Rt 41 but still set back on the property.

To put the size into perspective… if you took the ENTIRE Deptford Mall including the department stores, lifted the second floor off and laid it next to the first floor… that’s about the same square footage of the two proposed buildings.

Access roads seem to be proposed for both Route 41 (Hurfville) and Route 47 (Delsea).

In the last few weeks we have reached out to the developer who has not responded to our multiple inquiries.  (We have his email and phone number).  We also spoke to a representative in Deptford Planning who, while they were aware of the project being planned, since it has not come before the town officially they can’t say much on the project.  It does seem there are zoning issues to be addressed first.

We must of rattled things a bit as today I drove down a couple of the close residential streets, and after talking to residents on Claro Drive I have learned they just received a notification of the project.  A resident is sending me the copy, but they didn’t recall any action items listed at this time

No word on the tenants, but…

I think it’s rare for a project of this size to be developed without a tenant signed.  We’re talking multiple tens of millions of dollars.   You just don’t build something like this and hope for a tenant.

I am NOT saying it’s Amazon.   But they have to be one of the leading contender as they are building large warehouses all over South Jersey.   The Amazon pattern for new facilities in New Jersey seems to be they have another company develop the buildings without disclosing who is coming in, and then months before opening they let everyone know its an Amazon facility when it comes time to hire staff.

In just the last few recent years Amazon has added many larger warehouses in South Jersey, including:

It would seem that Amazon must have met all of it’s warehousing needs in South Jersey… but they also have a distribution much smaller hub in Bellmawr which seems to suffer from limited parking, as Amazon is now also storing delivery trucks in a the Deptford Crossing Shopping center where Marshall’s is located.   Ironic.

Other retailers?  Other large retailers are seeing the shift in their businesses, and how Amazon is dominating in online retailing.  Could a large “brick and mortar” store being making a strong push into distribution warehouses, targeting Deptford with a warehouse to fulfill it’s local stores and handle internet orders?  Hmmm.. what massive retailer with a strong South Jersey presence could potentially step up to the plate?

Do you remember just a few years ago you could buy from Amazon tax free when delivered to New Jersey?  That was because they did not have a physical presence in the state and that changed when they opened their first warehouse.  Now there are MULTIPLE million sq feet of warehouses up and down the Turnpike/295 corridor to support the area Amazon business.

I see two big concerns of a project like this;  Traffic (employees and large trucks), and over night noise for area residents.

The lesser impactful (and smarter) access road is way over on Route 47 close to Route 55.   To get there, an interior road would be developed which would travel around the landfill alongside Route 55.  You may have noticed a bi-level house on Route 47 near 55 North that is used as offices… that will be the general area where a new traffic light intersection would be created.   This is a very smart placement as trucks and employees will have almost direct access to Route 55 without impacting area residents or more residential roadways.

The second entrance will be located off of Route 41 in the currently wooded area between the Deptford Public Works building and Anco Drive.  Plans call for a widened road at this area and it looks like it splits off to allow dedicated roadway for cars turning in.  While I would prefer to hear that all traffic will be routed through the 47 entrance, this change in the roadway makes me think they will expect regular traffic into this entrance.   The smaller of the two warehouses will be located closest to this entrance.

Also shown in the plans is a new single free-standing retail building on Rt 41.

Just my own theory, but I wonder if the two large road construction projects in Bellmawr for 295/42/55 makes this location more attractive now for the warehouse developers?   The larger of the two road projects will rebuild the major interchange, and the second project (Missing Moves) which is expected to start within the year, will connect 42/55 North to 295 South (and reverse).  That second project will also open up the second lane of that large Route 55 overpass (which crosses over 42 to the north).  This makes setting up warehouses along Route 55 even more viable as trucks will be have easy access to the entire Northeast corridor with the easy connections to 295 in both directions.

Comments from One Family

This sunny afternoon I drove down a few of the streets in that area and spoke to one couple who informed me they had just received a notice of the upcoming project.  They will be sending me a copy of the notice.  Their initial thoughts were not of big concern but the did say they have been on the property and in the winter when the brush is gone from the woods you can clearly see their street and house from the area where the one building will start.  This makes overnight noise a concern for them.  But overall, they weren’t in “alarm” mode and were looking to know more about the project and impacts.

There are several residential streets on the North and East sides of the property, as well as several other nearby neighborhoods; Garden City, Blackwood Terrace, Almonesson and Willow Ridge.

Zoning and a History of a Strong Neighborhood

The land for this project was previously approved for a mixed use project of retail, housing and commercial.  Looking at the 2017 Master Plan it seems it is zoned Office-Industrial.  Building these large warehouses will definitlely put them in front of the Planning Board, and I would assume would need approval from the Zoning Board also.  This would be an open presentation where residents get an opportunity to listen, ask questions and comment.

This acreage has a strong zoning history with area residents, as in the 80s this land was targeted by the owners of Kinsley Landfill for expansion.  Not only did the local residents rally together to stop that expansion, it soon lead to the full closure of the core landfill (well a part of that is because they now had no room to expand!).  That was just one of several incidents where Deptford residents gathered together to fight large development projects, with another notable one being a Walmart on Route 41 a few decades ago.

Deptford Continues To Look Beyond Retail

Long known as a retail hub of South Jersey with the Deptford Mall at it’s core, Deptford has been expanding it’s presence into other commercial offerings with the growth of Rowan College, medical facilities with Nemours and Inspira, and now large distribution.

As a Deptford resident I do recognize that my taxes seem to be lower than surrounding communities, and this is largely due to the large retail store presence (paying taxes).  It’s a good thing that Deptford looks to offset taxes with other avenues such as Warehouses, and they look to improve local jobs with Medical facilities… we just all have to work together to make sure it’s done smart and doesn’t have negative impacts in other areas. 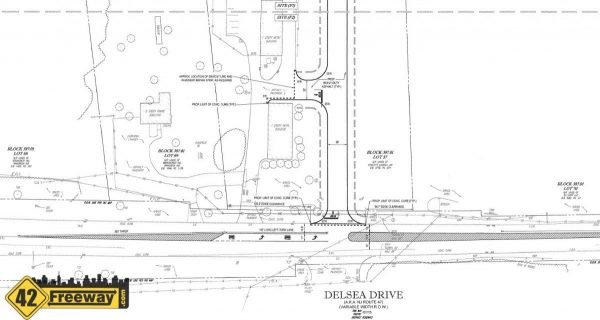 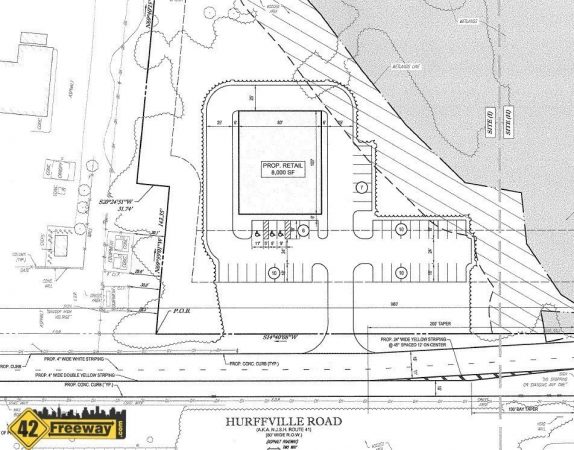 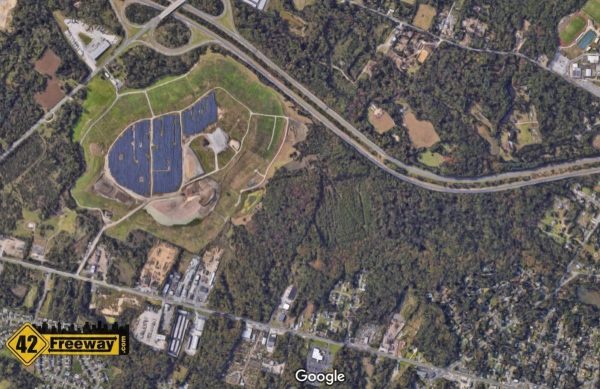 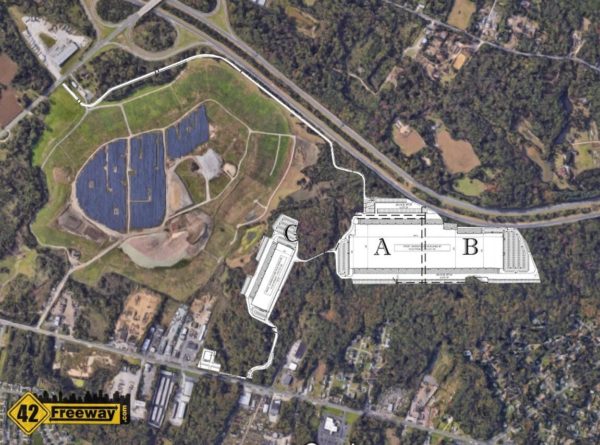 Overlay image was created by 42Freeway using submitted siteplans and Google Maps. Placement and scale may not be 100% accurate, but are really close! 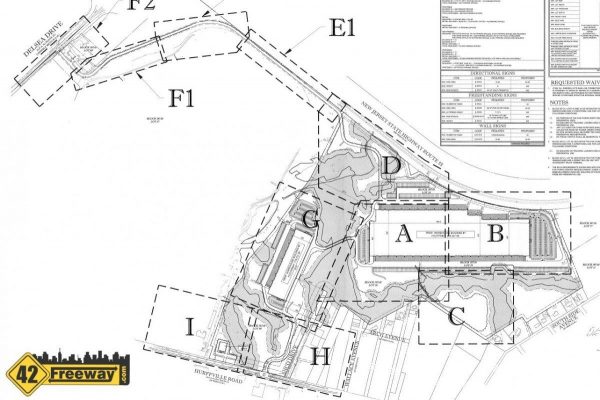 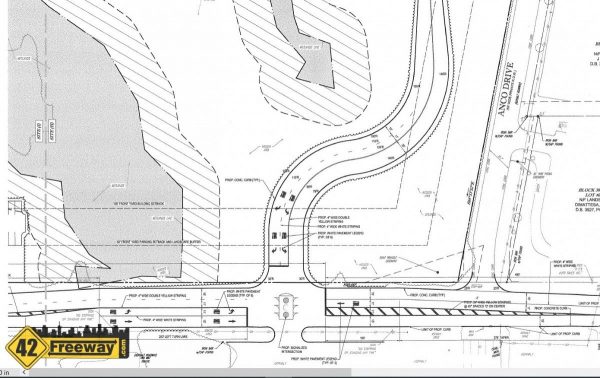 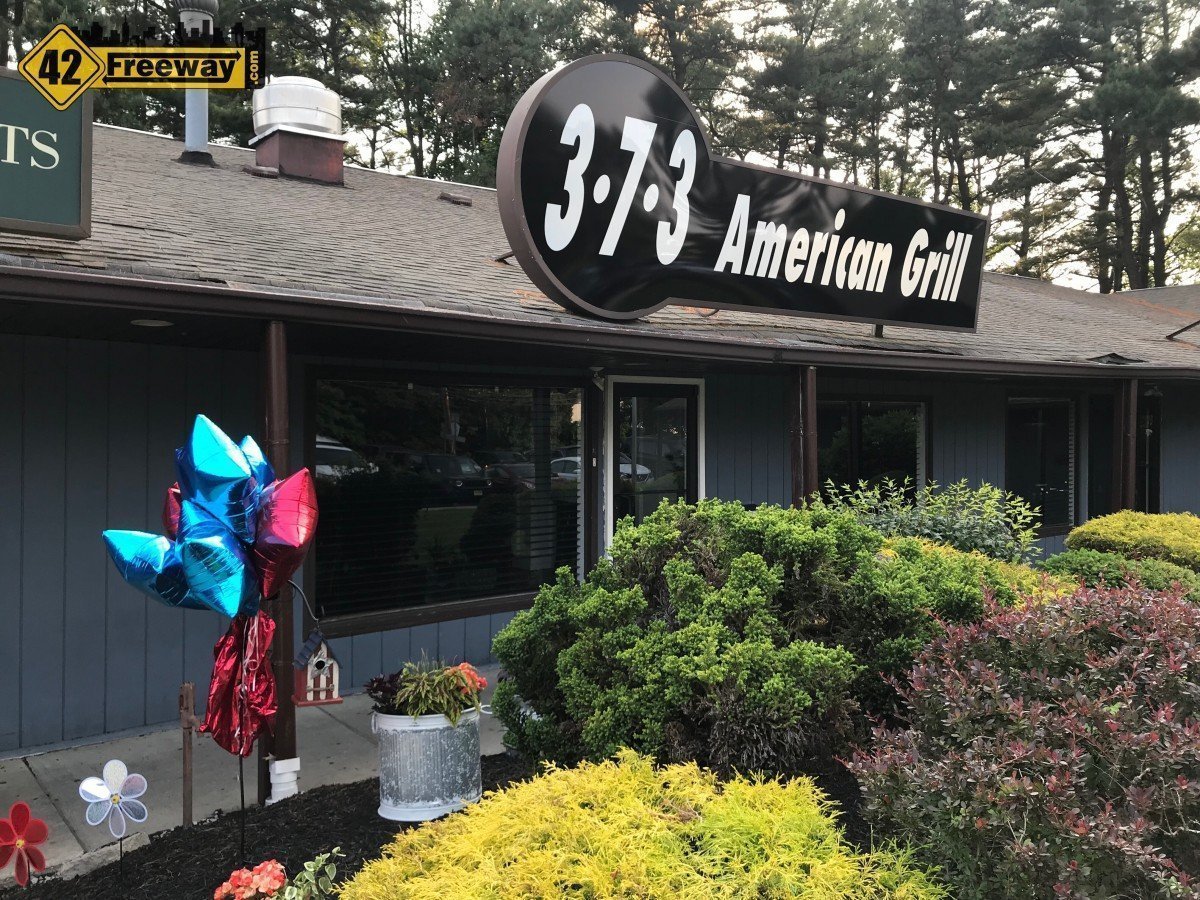 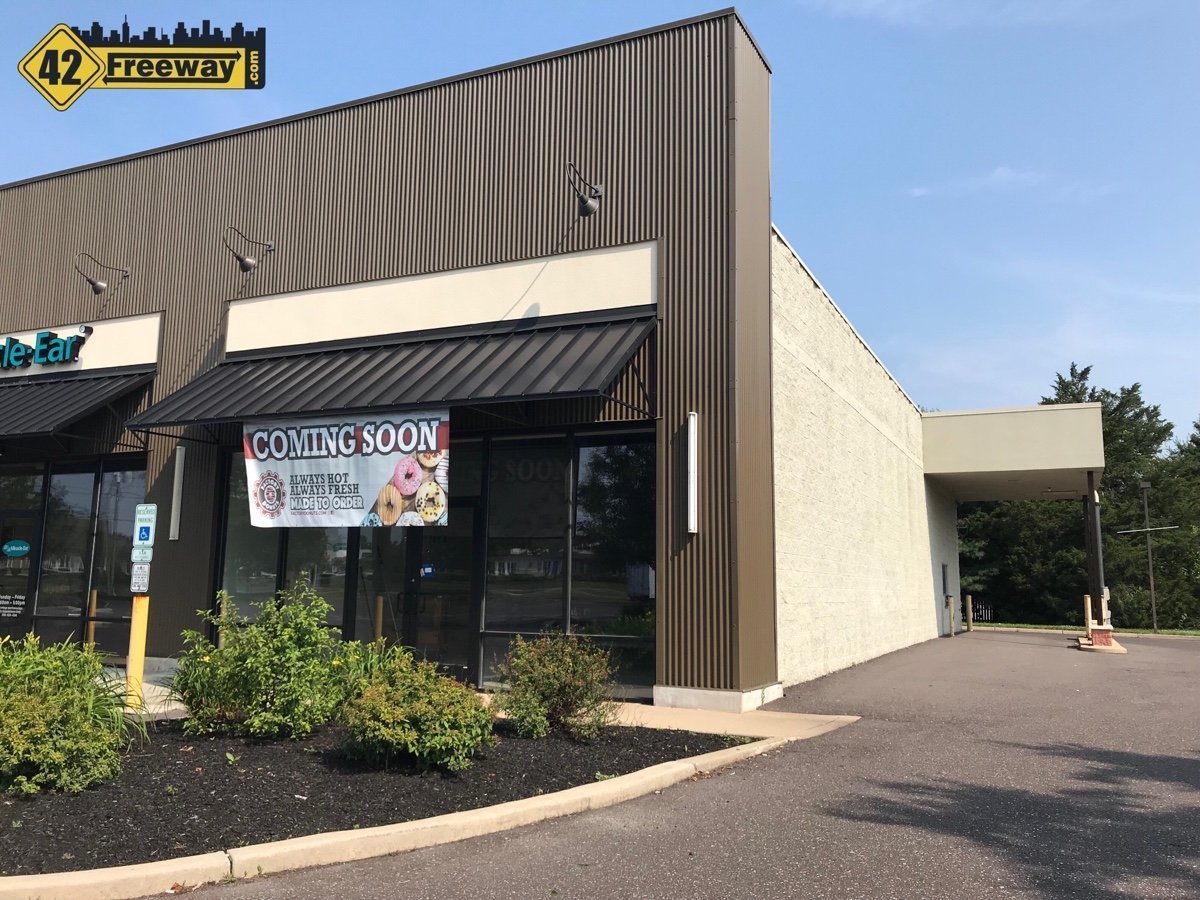 I agree that this is good news and look forward to the day when Deptford will once again have a supermarket without its boundaries.