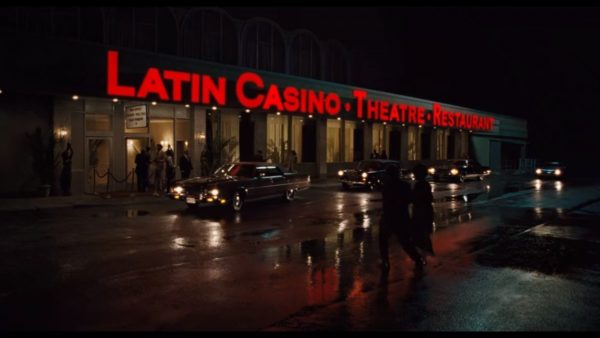 It’s no secret that 42Freeway and many of our readers have a lot of interest in new restaurants and bars… people will go out of their way for unique and exciting experiences!  And for decades there was nothing bigger, better and more well known, than Cherry Hill’s Latin Casino!

“The Irishman” is a recently released Netflix film by famed director Martin Scorcese which features a key scene taking place in an awesome recreation of Cherry Hill’s legendary hot spot.  And don’t be fooled by “Netflix Film”… this is a huge $140 million budget film with a cast just as big…  Robert DeNiro, Al Pacino, Joe Pesci, Harvey Keitel, Ray Romano and Anna Paquin are big time recognizable names, but the cast is huge in this 3 1/2 hour epic movie!

If you aren’t familiar, the Latin Casino wasn’t Latin… and it wasn’t a Casino.. but what it was, was a nationally recognized top entertainment facility where the biggest names in show business would perform.  While it started in Philadelphia, it’s true “hey day” was when they built the massive Cherry Hill location on Route 70… at a site best remembered as the location for the Subaru headquarters (which was just recently demolished).  Some articles from the early 60s described it as the largest nightclub in the world, seating over 1,500 people!

Because of it’s famous performers and proximity to Philadelphia and Cherry Hill’s Courier Post, there is a ton of media coverage on the Latin Casino, both when  it was booming and when it closed 18 years later.

Wikipedia has a good page on the Latin Casino, and this paragraph describes some of the performers:

Frank Sinatra was said to have called it one of his favorite venues, and South Jersey Magazine mentions that he and Dean Martin did a rare run of shows together.

And in 1960 one of Hollywood’s biggest stars, Marlene Dietrich performed at the Latin Casino.  The Dec 21, 1960 Courier Post has an interview with Miss Dietrich about the Delaware Township club (and yes, in 1960 Cherry Hill was called “Delaware Township”!)… and if it wasn’t clear how “big-a-deal” the Latin Casino was at the time… she makes it clear:

“I was very happy about my engagement at the Latin Casino. From the very day it opened, this magnificent spot has been the talk of the entertainment world. Already it is being talked about as the ‘showcase’ of the night club circuit and the goal of all performers”

Other articles I found describe the nearby Cherry Hill Inn and Rickshaw Inn (directly next to the Latin Casino) as hotels of the stars.  The Rickshaw Inn is said to have allowed the celebrities to hang out in the hotel lounge long after the legal close.  More from the Courier article:

Miss Dietrich is ensconced at the Cherry Hill Inn, and when we informed her that the site of her hostelry served as a lookout post for Washington’s troops during the American Revolution, she appeared truly interested.

A story in Deadline last month discusses the recreation of the Latin Casino for the movie and how they used another familiar South Jersey icon to fill in for the venue;

It’s funny because when they were looking for the exterior for the Latin Casino—because the interior was in the city—I remembered driving by it when I was a kid, and I was like, “Well, it looks like a grocery store.” I mean, the front of it looks like a grocery store, and then inside, you saw a certain raised area, which was where the stage was. It ended up that we found a Pathmark that was closed, and that’s what we turned into the exterior. Sometimes, something just has to trigger an image, and for some reason looking at the pictures, it made me think it was a supermarket—and that’s what it turned out to be.

The Irishman and the Latin Casino

The story behind the movie is based on the book which focuses on the demise of famed mobster Jimmy Hoffa, as told by Frank Sheeran… who was a bagman and hitman for the mob…

Admittedly this 42Freeway author won’t see the movie until this weekend, so I’ll hold back on going into more detail.

A single event brought many of these players into the same room, an epic set-piece in the movie: Frank Sheeran Appreciation Night, a lavish dinner in honor of the Irishman himself at the Latin Casino outside Philadelphia in 1974. There was a dais of dignitaries, a roomful of Teamsters and mobsters, the crooner Jerry Vale, dancing girls, prime rib and, out of consideration for the many Catholics in the room on a Friday night, lobster.

“Jimmy Hoffa was the featured speaker,” Sheeran recalled, “and he presented me with a solid gold watch with diamonds all around it.”

The End of the Latin Casino

Atlantic City’s first casino, Resorts, opened in May 1978… more than a coincidence to the same year the Latin Casino closed.   So yes that absolutely was a big factor as Resorts was able to compete for the top talent and offer guests a full casino experience at the beach.

But the Latin Casino’s problems started several years before that, when the IRS came knocking, looking for millions in back taxes.  Also around that time in 1977 the nearby Garden State Park racetrack burnt down.

The tax problems and declining casino style performer options caused them to change ownership and reinvent the facility as Emerald City disco club…which many said was the largest and most lavish dance club at the time.

There is so much more that could be said about the Latin Casino… I am sure it alone is worthy of a movie… but that’s all I have for now.

There are also some theaters in Pennsylvania showing the movie.