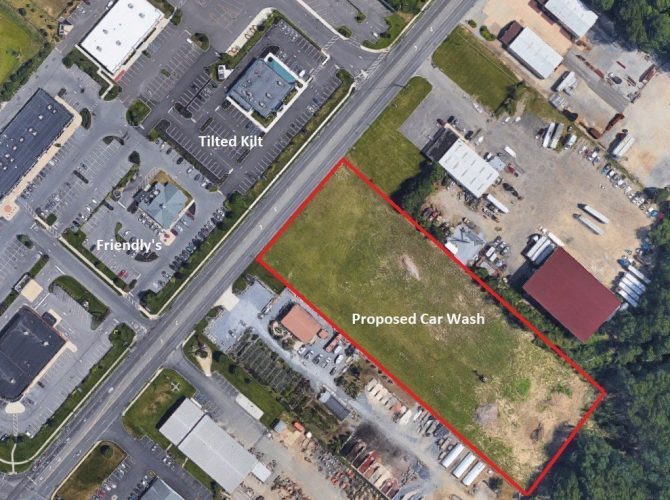 A 4,600 sq ft Car Wash is planned for the empty property which sits across from the Tilted Kilt and Friendly’s on Berlin-Cross Keys Rd, according to information submitted to the Winslow Zoning Board.  The zoning variance request was to take place on April 20, 2020 but the meeting was cancelled (seemingly due to the current global crisis).

The car wash is described as a 4,600 sq ft building and they are appearing before zoning as there is a use variance needed, as well as an approval regarding “setback” from the side yard.

We aren’t entirely clear of the actual brand name of the car wash.  We see a mention in the documents of “express car wash” all in lower case, which makes it seem more like a description than a name.   Maybe a coincidence but MarltonPike.com reported that in Pennsauken a Zippy’s Car Wash was recently developed… also at 4,600 sq ft.

This property has had a For Sale sign on it for years, and advertised a “Liquor License Available”.  When 42Freeway saw the Under Contract notice posted on the site, we were excited to think another restaurant was coming in (and we confirmed that there is a license associated with the property)_.. but as we just stated, it will be a Car Wash… and we have no idea what becomes of the Liquor License.

The developer is Hutton Company based out of Chattanooga Tennessee.  I found one article where they developed a Zips Car Wash in North Carolina.  It seems they are a developer for other businesses, not a car wash operator… yet the documents seem to present them as the owner of this project.  Maybe they develop it under their name before selling or leasing to the owner, which seems to be a common development model.

An  interesting side story is that this large commercial developer Hutton, was founded by Karen Hutton in 1994 and she is still the CEO today.  An article in Restaurant Finance Monitor calls out “was no easy task for a woman in what, even today, remains a male-dominated industry”.   The article goes on to say she has built almost 200 Dollar General stores, and  has developed more than 1,000 properties.

Development of the new Inspira Hospital in Mullica Hill is moving fast, just 9 months after the ground breaking ceremony.

Back in early January a new eatery opened up in the Deptford Mall, 1000 Degrees Pizza!

Construction fencing has appeared on Route 45 Woodbury Heights at the site of the former Bruster's Ice Cream. We reported in 2017 that a Starbucks was planned, and despite a decent delay we still believe Starbucks is coming! And seemingly, construction starting soon.
This Post Has 2 Comments