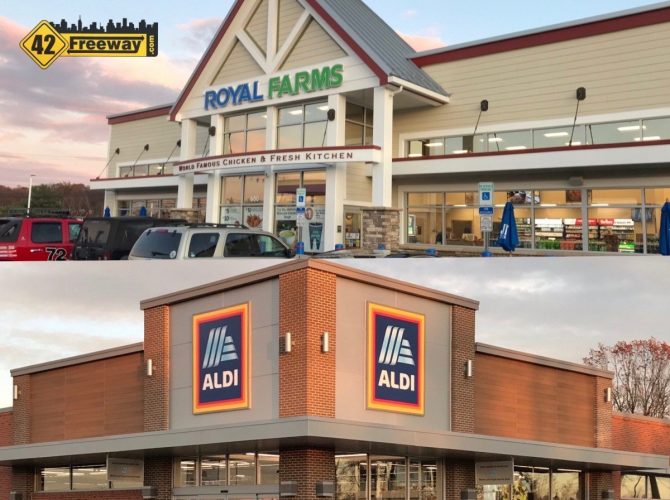 Three loooonnngg awaited stores along Berlin-Cross Keys Road opened in the last month, with Aldi Supermarket setting up shop behind Panera Bread and Wendy’s at the Acme/Shop-rite intersection, and Royal Farms opening TWO stores; one at the Johnson Road intersection across from the classic Wawa, and the other a few miles up in Berlin at the White Horse Pike intersection (which just opened December 5th!)

42Freeway stopped into both stores 2 weekends ago, and both are very bright  and inviting stores, and it seems area shoppers have already found their way to them without our help (ha!) as both were very busy. We broke the story on the Aldi Supermarket plans back in August 2017 and while 2 years seems long…. it’s honestly very fast in construction/development terms.  At the time we highlighted that a FOURTH supermarket Lidl had also gained approval at the intersection not to mention Target is very close by!  Several years later that development has not happened yet as Lidl slowed up area store development but it still could happen as they continue to show interest in South Jersey as they seek approval for a location in Somerdale and a Cherry Hill location is nearing completion. The convenience store wars continue with Royal Farms opening up on a prime corner of an large Winslow farm property at Cross Keys and Johnson Road.

We have not had a chance to visit the Berlin location which just opened, but visited during construction and it’s a prime corner where Berlin-Cross Keys Road meets the White Horse Pike.  It is also easily accessible from Route 73.  Previously the corner was empty but next to it was the Country Town Diner which was destroyed in a fire.

Despite some who comment “Wawa competition is proving too tough for them” they still have new stores coming up with Marlton closer to our area, but now moving into Central/North Jersey including Brick.  They are continuing their pace of 5-6 stores a year in New Jersey.

The Empire Diner has taken over the famed Brooklawn Diner! They have brought back the 24 hour / 7 days schedule, and they claim to have the largest menu in South Jersey!

Anytime Fitness 24 hour gym is opening in Deptford this week, and is located in front of the Home Depot on Hurffville Road. Full article has first look preview photos!

The Woodbury Heights building which housed the Bruster's Ice Cream and Nathan's Hot Dog eatery was only about 6 years old, but this week it was demolished to make way for a new Starbucks.
This Post Has 0 Comments