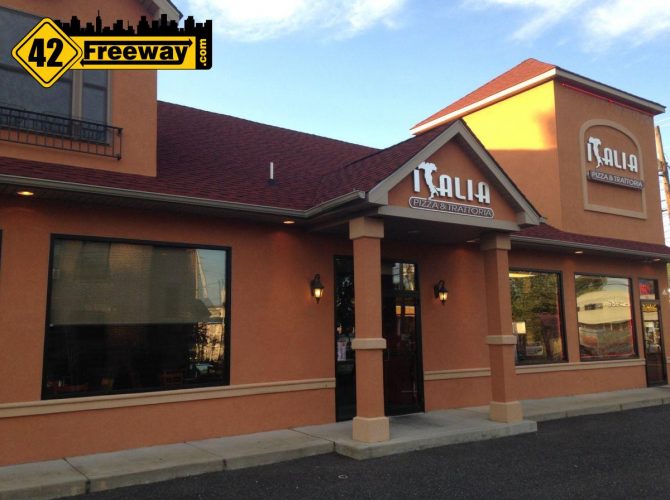 Famous even beyond the borders of the town, Bellmawr’s Italia Pizza reopened last week with a completely new management team, and they come with pizza making credentials more than worthy of Bellmawr’s beautiful Italia Pizzeria.

There are a lot of pizza shops in any town, and without question both Italia and Vito’s were two widely popular places.

I stopped in at Italia’s last week to speak to Joe and Charlie about their new venture at Italia.   Both gentleman are very friendly and very interested in making customers happy.  They want to be a positive part of the community, while providing delicious food.

Joe explained that after taking a break for about 5-6 years, they jumped at the chance to bring Italia pizza back to it’s place at the top of the area pizza and Italian food shops.

The Italia restaurant is already a beautifully remodeled place, so they were able to freshen up the place, upgrade the seating and add booths in the main kitchen area.

Here’s their first winning recipe:  Take the Italia building and location, add in Joe and Charlie’s delicious recipes… and its a can’t beat combination.

I took home food to my family, and we thoroughly enjoyed it!

Doing some quick Googling, I found this Yelp review from 2010 of Vito’s where the reviewer calls out Joe and Charlie specifically:

I have lived in several cities around the country since leaving the burbs and have come to believe that Joe, Sal and Charlie somehow mastered the art of pizza-making.

Aside from the pizza, the cheesesteaks, hoagies and their Italian dishes never disappointed.  Personally, I believe that they make the best eggplant parm that I have ever had (including many far more celebrated places in NYC and Philly).

What’s especially interesting about this review is the person posted this AFTER they brothers sold the restaurant.  He was reminiscing of how things used to be… which makes it all the more genuine.

So while its been 5 or 6 years since Joe and Charlie were in the business, it’s clear that they still have the skills to make Italia special again… and Bellmawr is lucky to have their delicious food in Bellmawr.

Stop in for a bite to eat, or check out the website for menu and other information