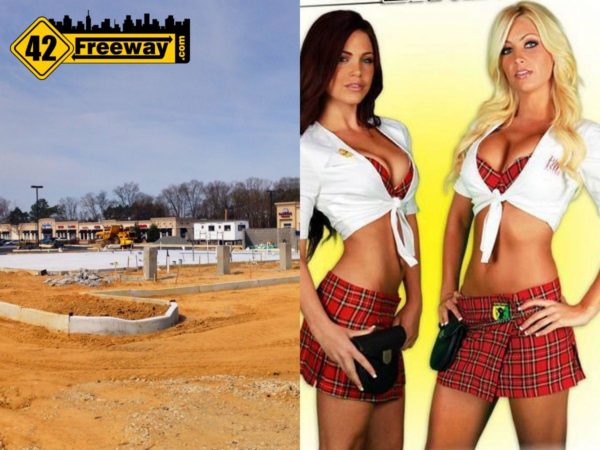 I have a backlog of bar/restaurant stories to post, so I am declaring this week… “Bar Week”.  Hoping to have a new bar story each day this week.   First up, is the new Tilted Kilt which is being developed on Cross-Keys road in front of the Tractor Supply.

Construction started last fall, seemed to stall over the winter… but now it looks like things are a go for the lastest eatery along Cross-Keys road.  Unlike the other national chains along the roadway, The Tilted Kilt is going up on the other side of the AC Expressway.

Tilted Kilt is a national restaurant chain in the same category as the more familiar Hooters chain.  Tilted Kilt’s twist on the server uniform is a Scottish kilt, white shirt knotted in the front… and a lot of exposed mid-section.

My first visit to a Tilted Kilt was in Clearwater Florida a few years ago at a location across the highway from the Phillies’ Brighthouse Stadium, and I’ve also visited the King Of Prussia spot.  There is also a location in Hamilton New Jersey.
Don’t be fooled by the uniforms.  First and foremost they are a sports bar.  Big beer selection, wings and entrees… and in a very nicely designed restaurant (based on the two locations I visited).

I’ve known about the location since last year, when I read about it in Gloucester Township planning board documents which I read for my interview with Mayor Dave Mayer.

According to the planning board documents, the new Tilted Kilt restaurant will be a 7,400 sq ft facility with a 284 person capacity, and an enclosed outdoor patio.

The small stretch of road will have Bertucci’s, Buffalo Wild Wings, Texas Roadhouse, the “soon” to open Plaza Azteca and now the Tilted Kilt.  Liquor licenses are getting very scarce in Gloucester Township, with such a large concentration on Cross-Keys road…  which is surprising considering the massive Gloucester Premium Outlets are going up several miles up the road and as of now it seems they wont have a liquor license available other than the existing Sam’s Bar, which is starting a remodel of its own (more on that to come)

A very interesting aspect of the new Tilted Kilt, is its owner.  Amol Kohli is only 26 years old, and has already had success with several national chains.  In 2012, the Daily Journal featured the story of Mr Kohli who made his big splash by successfully taking over several Friendly’s restaurants… two in New Jersey and five in Pennsylvannia (at the time of the 2012 story).   In 2014 Drexel University put him on their “40 under 40” list, and noted he has 12 franchises already, at the age of 25.

Amol has branched into other franchises, including a recently opened Papa John’s in Bellmawr NJ.

42Freeway.com has been in touch with the very busy Kohli, and we hope to have a more detailed interview with him soon.

The Tilted Kilt chain was also featured in an episode of Undercover Boss, where the founders/CEO’s go undercover in their own company’s; working in lower level positions and learning more about their companies and employees: