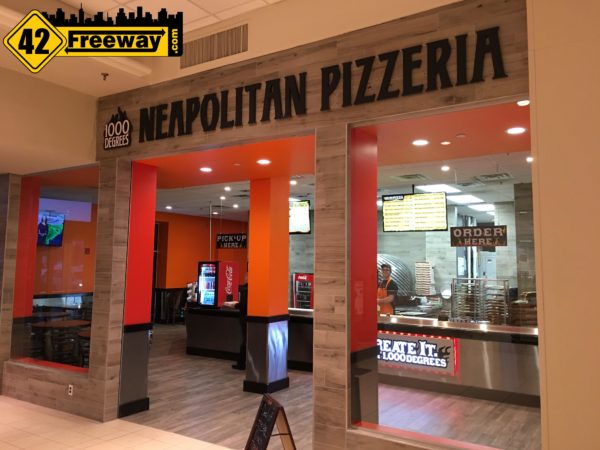 There have been a LOT of changes to the Deptford Mall over the years, and a lot of new stores popped up just in the last 18 months.  42Freeway has a lot of catching up to do… even if the stores have been opened a little longer, I’d like to give them a mention here at the site because damn.. we should’ve posted about them when they actually opened!

But this one isn’t too long ago.  Back in early January a new eatery opened up in the Deptford Mall, 1000 Degrees Pizza!

The new pizza shop is surprisingly not in the food court, and is instead located at one of the mall entrances, specifically the one located next to Verizon on the upper level at the Sears end of the mall.   Long-timers will recall this is very close to where the Mall’s original pizza restaurant was located… La Dolce Vita!

I did stop into the new location, but didn’t get a chance to try it.  They have all the ingredients right out front behind glass, and it seems to give a “Subway” experience for pizzas where you can see and pick the ingredients you want on your pizza.

With the addition of the pizzeria to this upper level mall entrance, the iconic Deptford mall has eateries located at 3 of it’s 4 key mall entrances with Red Robin and Ruby Tuesday taking hold of 2 entrances at opposite ends of the mall.