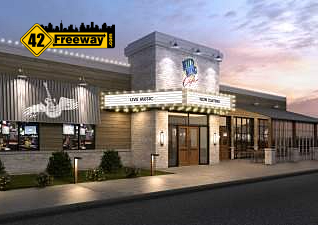 The official groundbreaking took place earlier in November for a new eatery called Wild Wing Cafe, to be located in Barrington NJ on the White Horse Pike next to the Super Wawa.

Wild Wing Cafe is a newer, but growing national full service restaurant with a twist… they feature live entertainment as a key part of the experience, something that is very rare for an eatery of its type.  They are currently centered in the Southeast (its first location was in Hilton Head) and the Barrington location is the first in the Northeast.

And when I say “full service”, I mean that it will also include a liquor license to offer your favorite beers and cocktails.  The menu is similar to Buffalo Wild Wings and Hooters, wings are a key menu item but they also feature delicious burgers and other entrees   They target several crowds; known as a go-to sports pub, a delicious restaurant, and a live entertainment venue.

Because of the new location’s close proximity to the White Horse Pike Home Depot, I think many would assume this is Lawnside…but this area, close to the 295 entrance, is actually Barrington.  Close by are the towns of Haddonfield and Audubon which have limited alchohol options, and should factor positively in the success of the new establishment.

Previouly this location was targeted for an Iron Hill Brewery, which is still featured on the developer’s website (Delco Development).

The Wild Wing Cafe press release was actually issued back in June, and identifies the new owners as Craig and Janette Colby, who are South Jersey residents.

Craig comments: With Wild Wing Cafe, we have a chance to exceed those (customer’s) expectations.  The “wow” experience we can deliver is unlike anything else currently in the industry with the quality of the food and the level of entertainment that Wild Wing Cafe provides.”

Craig Colby and his Colby Restaurant Group have several articles on the internet regarding their successes.  Craig started out in the computer industry and in the early 90s with the help of his twin brother Mike and another friend they purchased a Burger King, which led to owning 14 Burger King locations.  Later they sold the Burger Kings and moved into other restaurants including Red Robin.

I personally like the concept and I’m excited to visit the restaurant when it opens.  It’s a big win for Barrington, considering there are other options for an establishment like this in the area including the old Coral Reef location in Bellmawr at the Turnpike entrance.

Video review of Royal Farms convenience stores, which are being developed in several South Jersey communities. They are similar to Super Wawas... but are they really? Youtube link in article.

March 20th is the First Day of Spring which means Free Water Ice at Rita's!! But not in Runnemede NJ, as that location will be opening in May around the corner from it's old location, on Clements Bridge Road. Their Facebook page says they will have better parking and access from the road for customers.

Blackwood getting a new Dunkin Donuts near Sam’s Bar

Noticed the sign this weekend, although I had been told previously it…