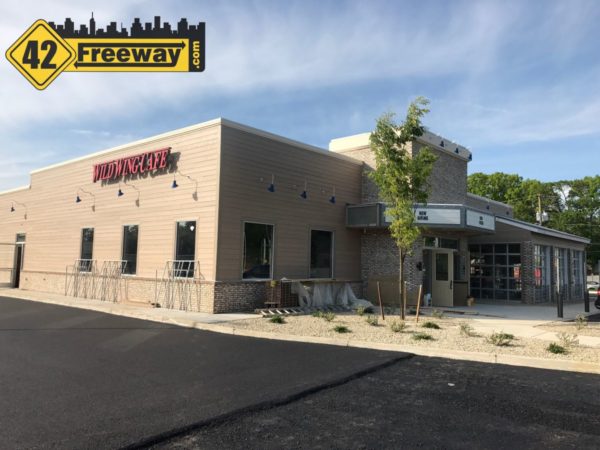 As previously reported here, Wild Wing Café is being developed in Barrington on the White Horse Pike.  The location is near the 295 exits, next to the new Super Wawa and is across from Victor’s liquors.

It’s a concept that you’ll compare to Buffalo Wild Wings.  They both feature delicious wings and obviously the names are very similar.   But the big difference with Wild Wing Café is they are featuring live music entertainment as a core part of the business model.

A dedicated, and elevated stage is prominently placed to capture the bar and table crowds.  It’s not a huge stage, but plenty of room for a 4 or 5 piece band.   The raised stage gives a perfect view of the performers, and honestly… it was pretty cool standing up on the stage looking down on the venue.

Today, 42Freeway got an exclusive tour of the new eatery, and we grabbed a few pics of the outside… and inside!

I guarantee you will say this… the inside seems much larger than the outside.  The building is fairly deep, and they have a large parking lot in the back.

The entrance features an old school movie style marquee, and its going to be awesome for local bands to see their names up in lights.

The walls on the road and entrance sides of the building feature large glass garage style doors.  They give great views to those inside and outside, and they open up in nicer weather to let the outdoors in.  They have the option of opening up the entire restaurant to the outside, or there is a smaller area which can opened up independently, while leaving the bar enclosed.

Speaking of the bar, the right side of the room features the large rectangular bar which seats 35 people.  There will be 32 drafts on tap.  The left and center areas of the room feature seating which will be a mixture of booths, tables and also high-top tables.

On the back wall, somewhat in the center but definitely closer to the bar, is the stage… and I would love to perform on that stage!

There is still a lot of construction going on (even considering most of the “big” stuff is done), but they had a lot of the décor items up.  The décor seems to be in the category of rustic western… closer to Texas Roadhouse then a Buffalo Wild Wings.

I have to admit… I’m excited to visit this new restaurant and venue.  Up until a few years ago I was in a few cover bands, and I’ve noticed how while live music is strong, it’s definitely not where it was decades ago… and I’d really like to see more of these types of concepts succeed.

The restaurant is targeting a June 2nd opening, and with construction moving along nicely, management is focusing on hiring!  They are actively hiring for all positions; kitchen, servers, bartenders and more.  You can reach out too them via email, the Wild Wing Site, or even stop down at the restaurant 9am-7pm each day.   When I stopped in, the manager was interviewing someone right on the spot!

Click on an image to see larger version, with slider.