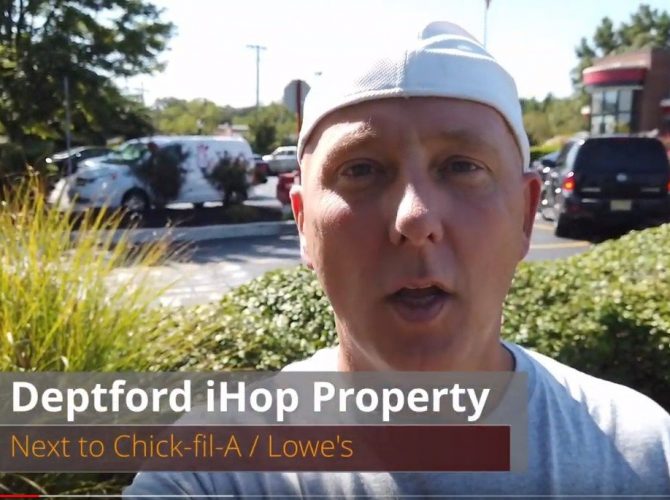 Back in 2016, 42Freeway.com reported on the proposed iHop restaurant to be developed in Deptford next to the very popular Chick-fil-A (and in the Lowe’s Home Improvement parking lot).  Deptford Planning Board did approve the project.  It’s a great location next to several shopping centers, the very popular Chick-fil-A, and new developments to come in the area which will further draw in customers.   Soon after a “coming soon” sign was erected and area residents started to get excited for the arrival of the new family eatery!

And then nothing.  Zero.

Some time later the wooden sign disappeared.  Wind, or removed by developer?

Now its three years later and still there has been no indications of development… and the status of the project has become one of the top questions asked of 42Freeway.com…  and apparently at the Township Municipal Building also.  I had no idea there was such love for iHop!

See the short YouTube video for my comments on the restaurant.

Rizzieri Salon has plans to build a new building at Ganttown and Egg Harbor Roads Washington Township, in the property which also has a newer building which includes Pat's Select Pizza.

Famous for their wings and Country Music, the Golden Nugget Tavern in Berlin New Jersey is finishing up an exciting new outdoor deck and bar to be ready for the warm weather of 2018. Cilck article for details, Video and photos!

Dave and Buster’s Approved For Gloucester Township – Images and Details

42 Freeway was the first to tell you back in May that Dave and Buster's is coming to the Gloucester (Township) Outlet center off of Route 42, and now we can say the project was approved by the planning board. Other outlets later added an early 2020 opening is targeted. Article has images and description!
This Post Has 9 Comments