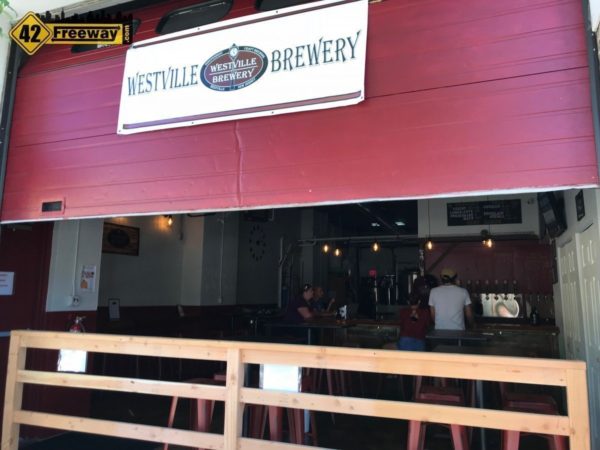 Westville Brewery has been serving up delicious beers from their Broadway location since early last summer, and based on my recent visits they have gained quite a following!  The brewery, which is located in a former firehouse, has been well packed with happy patrons on recent stops.

Area residents Mike and Pam Gordy are making a long time dream come true in owning the brewery.  Mike’s experience with beer brewing goes way back to 1996 when a co-worker introduced him to beer making, and he started out with the very simple $60 kits that we all probably have sitting in the bottom of a hall closet.  But Mike kept at it, and using his skills learned in Local 420 Steamfitters, Mike expanded his brewing system… building and welding parts and frames together himself!  Pam and others soon jumped in to help out and also learn the brewing process. The brewery building at one time was a Westville firehouse and knowing that, when inside you’ll realize the brewery space is the size of a bay needed to park a firetruck.  The garage doors up front lock in the realization of the building’s original history.   The space is well thought out to accommodate the brewery and tasting area, and every single aspect of the brewery design has passed through Mike’s mind and hands… as Mike, Pam and friends worked together to literally build the space themselves. As mentioned, the brewery is family owned and run… and that sense of family permeates the brewery.  The size works to their advantage, as the brew area, bar and tables are always within ear shot.  Mike and Pam seem to know most of the patrons coming in… and it just has a feel of a favorite local spot in the city, or maybe even going to your aunt’s house for a big family dinner.  People area laughing, talking… and Mike and Pam are at the center of it all.   It is a brewery after all and people will come in for the beer, but after spending some time chatting with Pam and Mike on different occasions it’s easy to understand that they are a big part of the reason Westville Brewery has gained so many fans!  I met Pam first last summer and realized she has that super sweet mid-western type mom personality that you see on your favorite family TV show… you know the one where she’s going to offer you a glass of lemonade?   And Mike is just an all around nice guy who let’s his passion for beer and building things show.. .the kind of guy you just want to well.. drink a beer with! I mentioned the garage door, and that’s a really nice bonus to the space.  Before moving in, that front wall was exactly that… a wall.  The landlord told them there was a garage door still buried behind the wall and ceiling but no one was sure of it’s state.   Well a quick demolition effort and they found not only was the door still intact… but the power motor to open it still worked!  So if it’s not apparent, a really cool feature of the brewery is on warm days they open up the front and let the Brewery and Broadway become one!   They also have a private patio area out back!

Which leads me to another maybe-not-so-obvious aspect of Westville Brewery… how this 20 ft wide brewery is really helping to bring business back to Westville’s small town business main street.  Not just for themselves, but for others along the roadway.  Yes, the renowned Speranza BYOB restaurant is across the street.  And easily accessible behind the brewery building is the beloved Schileen’s Pub which always brings in a big crowd…and several other restaurants including Grabbe’s are close by…  but, the walk-able main street experience that every town wants has alluded the area prior to Westville Brewery.    But now when you visit Westville Brewery.. especially on a warm day and the front garage door is open…  you realize its people who wouldn’t be here otherwise.  Who wouldn’t ever stop in this small strip of Broadway stores.  But now they’ve stopped in to try some beer, loved what they tasted, enjoyed the hospitality of Pam and Mike… and now they come back again and again to the brewery, and along the way they are eating in the restaurants in the area.  It’s foot traffic that the road hasn’t really had, it is definitely helping out existing businesses, and hopefully it attracts others to the nearby blocks.  Mike is quick to tell you how awesome the town was in helping them get open.  Then town really wanted them there and saw the advantages of having a brewery in that location would bring… and I really feel they were all right;  Mike, Pam and the town leaders.

So this is my second of three posts (or more) where I really screwed up.  As you can see by my writing here, I really like Mike and Pam and wanted to put something really nice together for them… and that takes time, and time for me gets put off “I’ll do it this weekend”.   And then way too much time goes buy. So trust me when I tell you.. it’s delicious beer in a cool building.  A two barrel brewing system that I am sure they are reaching their limits on.  There are food options around, plenty of parking in the back, and after a few beers at Westville Brewery you can also walk 150 ft to check out Schileen’s.

And in a “It’s a small world” moment… I realized where I live now in Deptford is the same street where Mike grew up!  Just one block away!  And his family are still my neighbors,

So many reasons for you to check out Westville Brewery!