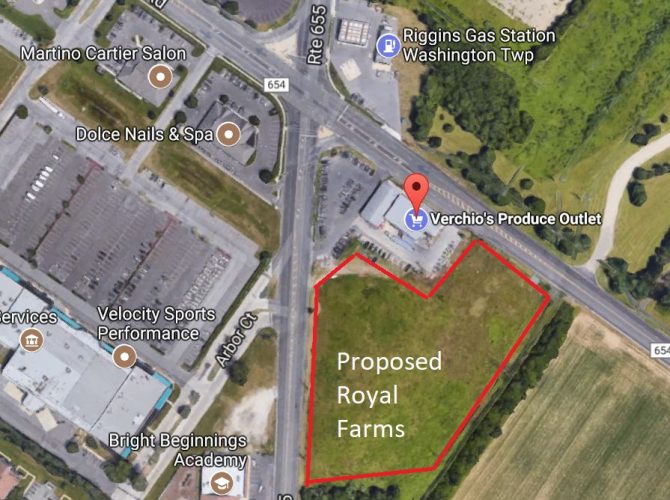 Well first let’s get this out of the way… amidst the numerous discoveries of new Royal Farms convenience stores being planned and developed in the area, is one targeted for Washington Township NJ (Gloucester County).  The property is at 268 Hurffville-Cross Keys Road, which crosses over to Fries Mill Road.  You could say the property sits at the corner of these two intersecting roads, but a very recognizable business sits at the exact corner… Verchio’s Produce and Deli.   The 268 Hurffville-Cross Keys property is 5 acres which wraps around the back of Verchio’s and stretches over to Fries Mill Road.  If constructed, Verchio’s would still sit on the corner, and the new Royal Farms would be positioned next to it facing Fries Mill Road.

We’ve known about this proposed location since the beginning of 2017.  It first appeared in Washington Township Zoning and Planning minutes back in November 2016 (pdf).  The minutes describe the new store as facing Fries Mills Road (facing the shopping center across the street).  From the start though, the township MUA (Municipal Utility Authority) expressed concern regarding this property’s usage as a gas station, because of its proximity to an important ground water well.  Several variances were requested by the developers, including the need to install two stormwater basins, and the MUA was requesting additional time to review the requests, “and define their position with regard to safeguarding the township’s water supply”

An evaluation was completed to see whether a fueling station should be prohibited or allowed at this location. Well 18 does have air strippers which provides protection from volatile organic compounds. Periodic sampling should be completed to target volatile organic compounds associated with fueling stations. Other measures could include filtration of storm water and oil/water separators, and a maintenance schedule should be followed. If Zoning approves, these provisions should be added as conditions for the use variance. The evaluation concluded that the proposed station is not prohibited in this area provided that the proper protections are put into place and maintained.

42Freeway also found an extensive environmental report (pdf) completed for the same property in 2006, prepared for a company called “Storage Specialists”. One can only assume that at one time they were looking to build a storage facility there.  I am no environmental expert, and yes this is a very long report… but in scanning through it seems they found no previously existing contamination, no evidence of buildings ever being there, and no underground tanks.

Area news blog, the Washington Township Sun, reported that the August 2017 Council Meeting featured two proposed zoning changes, one being for the property at 268 Hurffville Cross Keys Road, where Royal Farms is proposing a new store.

The need for the zoning change was really more about a clarification.  It seems that while it is one lot, the zoning is mixed and a portion is zoned as rural and another is zoned as commercial industrial.  The proposal is to define the entire property as commercial.

The Sun article continues with saying several residents and environmental representatives spoke against the proposal, based on the risks to the community’s water supply.  Based on the comments said in the meeting, Council decided to delay their decision.

What wasn’t mentioned in that article, was the need for the zoning change to be all commercial…. well connecting the dots, it’s clear that they are continuing the process to get all of the approvals needed for the Royal Farms to start construction.

It should be noted that a gas station already exists at that intersection across the street, probably no less than 50 yards away.  Considering the depth of underground wells, while the other gas station is about 50 yards away, you’d have to wonder if the same environmental concerns exist there… and what was done for that gas station to make it safe?

This is all I have at this time.  42 Freeway has a strong interest in this story, and we are going to try and attend the September Council Meeting.

If you are not familiar with Royal Farms, in its simplest terms they are a direct “Super Wawa” competitor, featuring stores of similar size, gas pumps out front, and prepared food items.  The two most significant twists are; they are famous for their fried chicken, and they offer indoor seating.

Mr. Gunter provided testimony as to what Royal Farms offers, hot and cold foods, world famous fried chicken and healthy on the go type options as wells as provide seating inside and outside. This proposed store is 5167 square feet, an open floor plan with seating 4 tables with 2 chairs each, and 7 to 10 stools where you can sit and eat and outdoor seating. The virtual tour was shown on the screens with Mr. Gunter providing a description of what we were viewing. There are 8 gas locations for this location. The hours of operations will be 24 hours.