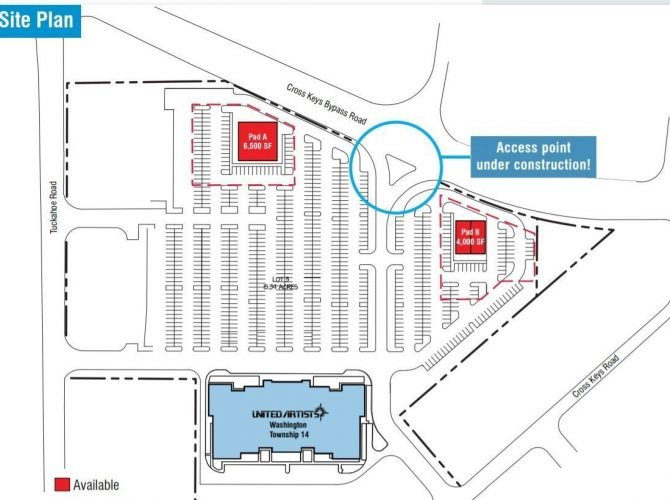 Construction has been taking place over at the UA Theaters on Tuckahoe Road in Sewell (Washington Township, Gloucester County) for about a month now… but all the activity is centered in the parking lot area furthest from the theater building.

The key item going in right now is a new parking lot entrance on to the Cross Keys Bypass Road.   Up to this point the main entrance has been off to the side on Tuckahoe, and not having an entrance at the Bypass Road where the theater actually faces, is slightly odd.   The developers are moving forward now to correct this.

This is a multiple phase project.  The owners/developers of the Theater have approval from the town to build additional retail which will take place at a later time.

Two new “Pad” store locations approved.  Nothing signed yet.  Nothing being developed yet

Also as part of the approval process with the town, theater management requested an approval to build two separate pad stores in the parking lot closest to the Bypass Road, along the commercialized roadway.

Township planning board meeting minutes, as well as a recent email conversation with the leasing company… both state that at this time no one has signed on to take over either of the approved pad sites.   But even without a deal signed, the property owners felt it was important to move ahead with the new entrance as it will benefit the theater itself, and increase the possibilities of signing new tenants.

Back in 2015 the theater “redid” the seating in the theater  to include much larger recliner chairs which significantly reduced the seating from 3700 to 1242.  As you would expect, this reduced the need for a full 1000 spot parking lot, and almost immediately after the theater seating was changed, the Theater management started the approval process to in 2016 to utilize the extra parking are for other retail uses.

A New Burger King Building Proposed for Blackwood-Clementon Road, Between Filomena’s and Rite-Aid

The Burger King on Blackwood-Clementon Road is looking to upgrade the store in a big way by building at a completely new location up the road a bit in the lot between Filomena's and Rite-Aid. Many will remember the lot as the location of the former East Side Mario's Restaurant. No word on what becomes of the old Burger King.

Construction has started on the realigning of Blackwood-Barnsboro Road in Washington Township, where it connects to Egg Harbor Road.  The new connection point will be further away from the center of the main 5-points intersection and include a new TRAFFIC SIGNAL, which should provide for better traffic flow in and out of Blackwood-Barnsboro Road.   This change will also make room for a to-be-developed Super Wawa which will be sitting in a new, larger wedge of the 5-points intersection... but positioned facing Egg Harbor Road.  Most of this land is currently the County Conservation (Mulch) business.

"Garage" is a teen female oriented clothing store, and they are coming to the Deptford Mall.
This Post Has 0 Comments