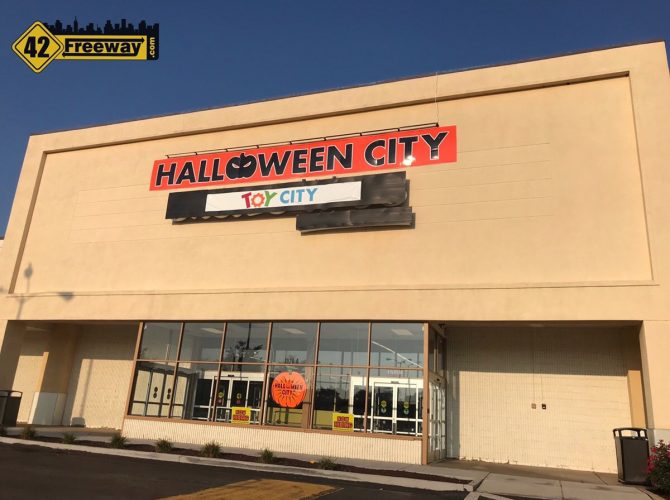 A combined Toy City and Halloween City popup Store will be opening soon in Deptford at the location of of the recently closed Babies R Us store, in the Forman Mills Shopping center at Clement’s Bridge Rd and 41.

In the wake of Toys R Us closing its doors, party supply chain Party City announced last month that it was opening up to 50 Toy City temporary pop-up stores… typically paired with their Halloween City temporary stores. This week the banners went up on the Deptford location.

It’s a smart strategy for Party City as they are already negotiating temporary leases for Halloween City and it’s just a matter of adding a couple extra months to the leases, \and opens them up to reach a consumer market left out in the cold after the Toys R Us closings.  It also provides them flexibility to change inventory allocation from Halloween to Toys gradually as the Holiday seasons change.

The surprises continue to roll in for the Almonesson Rd area of Deptford, with the signing of Hobby Lobby coming to join the new Burlington Coat Factory at the Court at Deptford!

Taking over a prime free-standing building on Almomesson Road next to a core shopping area, the Deptford School of Rock is targeting a June 2020 opening.  School of Rock is the largest after school music education program primarily targeted at children (and also an Adult program)... with classes starting as early as 2 years old, and heading into the older teen years and adults.

The Deptford Movie theater project on Clements Bridge Road has been stalled for almost two years.. now they say a hospital wanted the property.
This Post Has One Comment