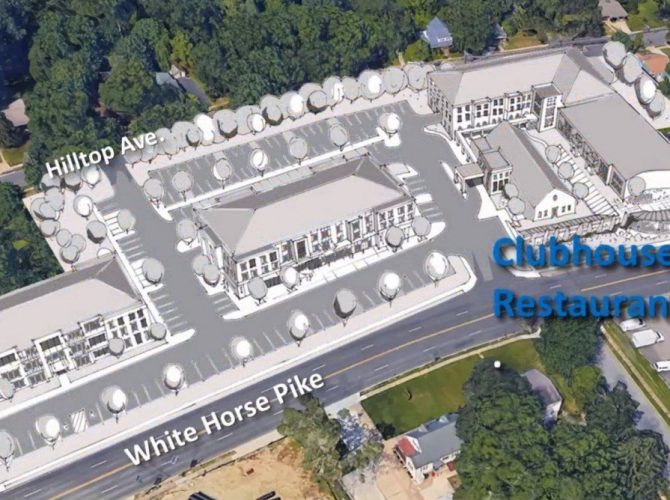 The town of Somerdale moves forward on their plans to convert the Our Lady of Grace church property into a mixed use development, with the official filing for a concessionaires alcohol permit for Tori’s Bistro, who will be opening in the actual church building. The new Tori’s Bistro will be offering a full bar to accompany the restaurant!  Tori’s is most known for the location on Chews Landing Road.  No timetable for the church location will open.

The Reserve at Grace

The South Jersey Observer reported on the initial public hearing in 2018 for the exciting project in Somerdale, which is to redevelop the Our Lady of Grace Church property on the White Horse Pike into a mixed use development.  The project is being developed by the town in partnership with a developer, and will include apartments (one and two-bedroom studios), 7400 square feet of commercial/ retail space, and the sit down restaurant.

This latest public notice is to announce that Somerdale has signed an agreement with Tori’s Bistro to apply for a Concessionaires Permit, which will allow Tori’s to sell alcohol.  This is not a traditional way of getting approval for Alcohol sales.  A concessionaires permit is provided to government owned properties to offer an alcohol permit to a business, to supply alcohol within the property.  Consider a large state owned facility like Giants Stadium in North Jersey…  The beer they serve in the stadium is allowed due to a concessionaires permit, because the State owns the stadium.   In the case of the new Somerdale restaurant and bar, Somerdale will retain ownership of the church building which will allow them to offer a permit.  This was a similar plan offered for Pitman’s Merryman Pub.

Passanante said he was motivated in part by the demolition last year of St. Gregory’s Church in neighboring Magnolia, now the site of a Royal Farms convenience store.  “I know people there weren’t happy about losing that building,” said Passanante, adding he wanted to avoid “total commercialization” of the Somerdale site.

In a SNJ Today article from January 2019, the project was further clarified as:

40 active-adult rental units, 50 luxury apartments, and a community center for residents — all at no cost to the taxpayer.

“We’re excited it’s [restaurant] going to have an outdoor deck for seating and a full-service bar.”

Tori’s Bistro is known to locals for its (former) Chews Landing Road location, which offered Italian fare including Seafood, Pastas, Steaks,Chicken, Paninis, Wraps Salads and more.  In a May 2019 article at NJ.Com, Chef Lazar spoke of the Church and the added symbolism to him and the town:

“My brother got married there,” Lazar said. “I was the best man.”  Where Lazar stood during the wedding, the altar, will be converted in the front of his open-air kitchen for the restaurant, which features Italian fare and will even include hometown brews from the Flying Fish brewery in Somerdale.

Thank you to Anne at South Jersey Observer for her assistance with this post.

Rowan College in Deptford is moving forward with it's Phase 1 expansion plans which include a new Medical building with Urgent Care. They will be presenting at the May 8th Deptford Planning Board meeting, looking for final approvals.

Caribbean Paradise Opened This Year Across From Washington Township High School. Outside Dining is Now Available

Caribbean Paradise is a new Jamaican restaurant which opened in Washington Township, in the shopping center directly across from the High School.   They are offering "A Taste of the Island" with their delicious Jamaican dishes.  They are on the left side of the shopping center (now called Cooper Plaza?), directly next to the Craft Room.  This is the second location for Caribbean Paradise, with the first being in the Berlin Farmers Market.
This Post Has One Comment