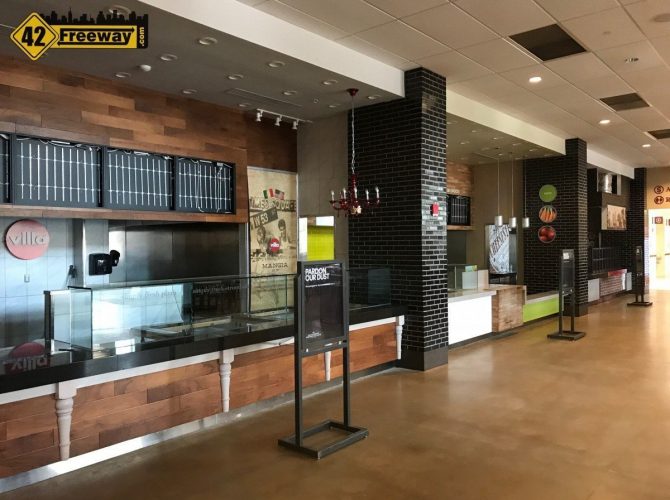 The Gloucester Premium Outlets have closed the food court ahead of a new build-out for an expanded Polo/Ralph Lauren store.   In a recent December visit we saw the 3 stores on the right were closed and we are getting reports that now all of the food court shops are now closed.

Polo/Ralph Lauren already has a presence in the Outlets, but the food court building will more than double the space they currently rent, according to a Dec 4 article at Patch.  This will also be a much better placement for Polo as they will be in a premier center focused spot of the shopping center, and positioned between two other popular stores Nike and Under Armour.

While this will reduce the number of eateries in the shopping center, they still have Friendly’s, Aunt Anne’s, Starbucks… and we’ve heard they will be adding more regular food trucks and food kiosks.   This is of course just months ahead of the opening of Dave and Busters which will feature a full restaurant and bar along with its entertainment offerings.

We’ve heard some comments from tenants and others that there may be plans to add additional eateries in the Outlets over time, spread out around the facility… which makes sense as it will entice shoppers to move around the entire center.

We have another post coming to catch up on recently opened Outlet stores.

Simply having a popular alcohol serving restaurant in your shopping center can be a big “foot traffic” draw.  More people are driving to Cross Keys right now because of new Cinder Bar.  More people will go to Deptford because of the new Miller’s Ale House when it opens “Hey I have to pick up a gift for Mom.  Instead of Walmart let’s stop at Target in Deptford ’cause then we can grab lunch at that new Miller’s Ale House”.  And yes the Outlets will definitely win to that with the new Dave and Busters (in fact, when the Applebees was proposed I called that out in 42Freeway “I would’ve preferred a more unique eatery for the Outlets… one that would make people drive a little to get to it“.   It seems Simon got my message.  🙂

Yes Dave and Busters is coming to the Outlet area, but people regularly comment it would be nice to have more full-restaurant options in the Outlets.  Deptford Mall in comparison will have three within the mall after Round One opens, and of course the mall is surrounded by another 10 or so.  The Gloucester Premium Outlet Management have not officially purchased a liquor license for the outlets or surrounding land, although maybe they have “Right to purchase” deals with existing GT license holders?  As an example of a recent change, we recently reported on the old Bruno’s Glendora license being sold to Founders Grove catering, and also over the years several other unused GT licenses have been purchased.

As an example of other centers proactively jockeying for liquor licenses:

Only time will tell if Simon Outlets adds more food and bar options in and around the Outlets.