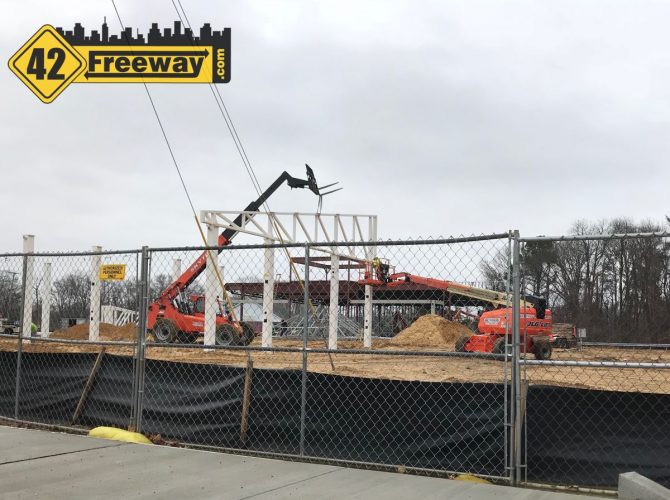 A new Super Wawa is showing significant signs of development in Sewell/Mantua on Woodbury Glassboro Road.  The site is the former Clancy’s Bar and located across from the large (and closed) Sony plant.

In a quick drive by earlier today, 42 Freeway was happily surprised to see the steel framework of both the store and gas pump canopy was mostly in place.  We were very short on time (didn’t even get out of the car) but we were able to pull to the side and grab a photo.

The Clancy’s Bar and Restaurant closed just over a year ago, and the real estate transaction closed in February 2017 almost exactly one year ago today.  That sale was over a year from when word initially leaked out that Wawa was coming.  County documents show the sell price as $2 million dollars, and it is believed that the Clancy’s owner retained the valuable liquor license.

Soon after the sale, the restaurant was demolished, and for many months not much else happened, at least to the public.  We received many inquiries here at 42Freeway as groups of trucks showed up and then left.  While we aren’t 100% certain on how large commercial projects develop, it’s clear that there are different teams of constructions companies from demolition, site preparation, gas tanks, foundations… and any of them could be different companies with different sets of equipment.

The moral of the story (and any of these commercial developments), is that it takes time to make it all happen.  2-3 years in this case.

This Super Wawa development comes as a new competitor Royal Farms is starting to open stores in our area, with Magnolia and Bellmawr opening in the last few months, and Gloucester City opening today (more on that to come).

In August 2018, a person representing Royal Farms Convenience Stores spoke before the Glassboro Council about the POTENTIAL of a store at the University Bowling Lanes property on Delsea Drive. The bowling alley closed earlier this year.

Interior construction is well under way for a new Dollar Tree store on Hurffville Rd Deptford, in front of the Home Depot. The location was previously an Anytime Fitness.  The business shares the building with Autozone Auto Parts.

After my recent mega-post about Gloucester Township, it was clear that a…