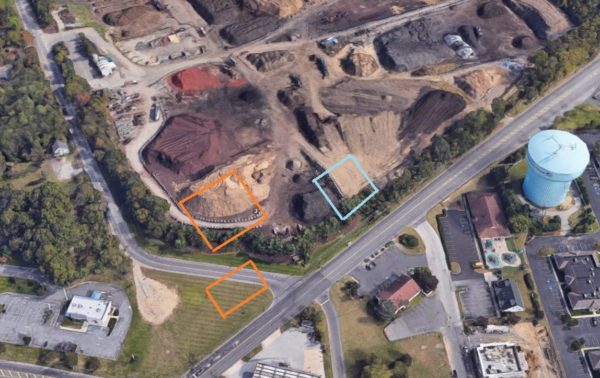 Back in November 2018, 42Freeway was the first to publish that a Super Wawa and additional stores were in development for the 5-points intersection in Washington Township, based on an online leasing advertisement.  Soon after that web advertisement disappeared but that cat was out of the bag.

A year later in November 2019 the developer and Wawa appeared before the Washington Township Planning Board asking for approval of the Wawa store, fueling stations, and a another building for an unidentified fast-food restaurant…  and the project was subsequently approved.

42Freeway has know about this approval for months and thought I could get over to the Township offices for copies of the plans… just couldn’t get there.   So here were are!

From our 2018 report, this is a very unique development in that to make room for the Super Wawa store and pumps, they will be moving (bending) Blackwood-Barnsboro Road much further down Egg Harbor Road, in line with the Kinder Care across the street (and almost as far as the Water Tower).  This would be the second redirection of Barnsboro Rd as many years ago it traveled straight into the 5 points intersection (hence the name!) and was previously rerouted to where you see it today.

There is no published timeline on the project.   One thing in their favor is it is the developer themselves who own the property… but one would think moving roads isn’t a fast process.