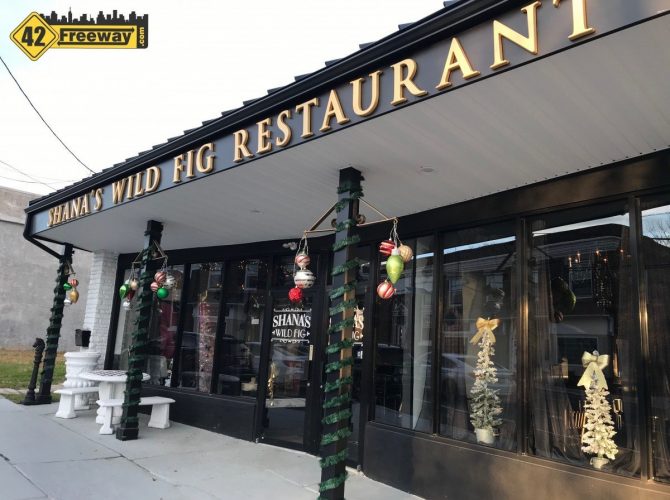 One month ago today, Shana’s Wild Fig Restaurant opened on the Black Horse Pike in the Historic Blackwood Downtown district.  Owner Shana Mastranduono is so local she grew up in Blackwood and is a Highland High School graduate!!  With her children getting older she has gone after her dream to own her own restaurant!

The location of what is really a new construction is in a free-standing building which previously housed an Asian restaurant and a shoe store.  Shana didn’t just dust off the place and open up… she spent 9 months completely gutting and rebuilding the restaurant into a beautifully decorated interior which even carries some of the Asian visual style inside.  But it’s definitely not an Asian restaurant, nor is it an Italian eatery matching Shana’s heritage.. well it’s all of those things.   In a Facebook post Shana describes her cooking style as… Well before we delve deep into the menu I think it’s best to take a step back and get a sense of Shana’s experience and how it lead her to the Shana’s Wild Fig concept.  42 Freeway chatted with Shana via social media.

My mother literally could not boil water, Ha!  So my teachers growing up were Julia Childs, Graham Kerr and Mary Ann Esposito. Food and art are my two biggest passions and I love to create. I was very much into painting and the arts in general.

I think it’s fair to say that typically a person of Italian heritage focuses on Italian dishes, but it seems Shana’s unique self-introduction to food also introduced her to all styles of cooking.

Finding myself a mother and a wife at twenty years old, my passion for art had to take a backseat. Feeding my family became the most important thing to me. Although I am Italian, I was very blessed to have had the influence of many different nationalities and cultures. I appreciated other cultures flavors so much that I wanted to share that love with my two children Angelo (23) and Nina (20) . I had both of my kids eating with chopsticks before they were even three years old!

After several success in the business and food world, Shana decided to follow her dream of opening a restaurant.

I raised my kids in Philly and with that, they naturally developed a diverse pallet. It was years of running my catering business and family’s car business which prompted me to open my restaurant. I realized I was going to work seventy hours a week so might as well be doing what I truly loved.  I was on a four year search and I simply could not find anything that felt like a perfect fit. Having stumbled upon this very neglected, abandoned building in Blackwood… I saw hope that this could become what I had been dreaming. On the Wild Fig Facebook page Shana shares the weekly menu and definitely matches the diverse food experiences that Shana has had.  Looking at the most recent menu it includes Shana goes on to say it’s not just about the food… or the decor… it’s the entire experience:

After nine months of construction and my heart and soul being poured into every square inch of this building, the Wild Fig was born. I wanted to bring the experience and celebratory feeling that my family has been exposed to, to our restaurant. We strive to break the old expectations of a normal restaurant meaning we wanted to slow down the pace and flow. From the moment you walk in to the moment you leave, we want everyone’s experience to be savored and feel at home yet with an upscale artistic vibe.

Shana’s passion for food, cooking and the entire dining experience is contagious, as her two children have also decided to pursue this as their careers.

Today December 6th is their one month anniversary!  Go visit Shana and have an awesome meal, support a very local small business… and a woman owned business at that!  And when you are done eating you can buy gift cards with a Holiday bonus: Last year Inquirer reporter (and friend of 42Freeway!) Kevin Riordan wrote a piece on the rebirth of Historic Blackwood Downtown as an Arts District, and the efforts of the Town leaders and individuals to make it a destination place again.  The catalyst for the timing of that article was a recently started Food and Craft Beer festival in the district, with resident Brian Hammell at the helm.  Gloucester Township also holds the Pumpkin Festival on the street, and…well.. it’s all just affirmation of the work put in by the town and residents to make Blackwood a better place to visit.

Kevin’s Inquirer article calls out the streetscape improvements done by Gloucester Township, and the center of the Arts district… the Mainstage Center for the Arts.

42Freeway adds that with the opening of Shana’s Wild Fig, the Blackwood District is on its way to becoming a foodie destination!  Other eateries in the few short blocks include:

Keep in mind that most of these restaurants are BYOB (check with each establishment) and also right on the Black Horse Pike basically next to the Meadows Diner, is a liquor store!