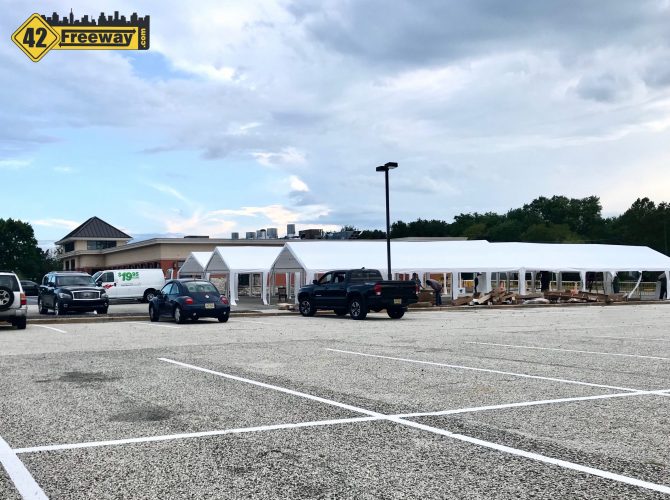 The Seven Star Diner in Deptford at 5-Points reopens for outdoor dining this Friday August 21st, at 8am.  They have been closed for 5 month, and they are opening in big way… and I mean BIG… in that they have three very large and long tents installed.  Equivalent of 6 wedding tents?  Well that’s when I saw them on Monday…  could be more now?!

The Seven Star Diner had been closed for 5 months… first because of overall Covid restrictions and then later they were working on kitchen upgrades.   We reported on the Seven Star Diner just three weeks ago, when we shared an earlier statement “Waiting for indoor dining to return”…  well things have obviously changed, and I like to think the 42Freeway readers had something to do with it!  We had a lot of questions from readers before that post, and a ton of support for the diner after I posted my video!

The Seven Star Diner is located in Deptford NJ at the 5-pts intersection.  They are a large diner with full bar!

The Food Court at Gloucester Premium Outlets has Closed. Polo/Ralph Lauren Taking Over the Space. Also Thoughts On Liquor Licenses

The Gloucester Premium Outlets have closed the food court ahead of a new build-out for an expanded Polo/Ralph Lauren store. This is ahead of the spring opening of Dave and Busters. I also give my thoughts on Liquor Licenses and Shopping Centers

In today's COVID-19 briefing by New Jersey Governor Phil Murphy, he announced that New Jersey is entering Stage Two of the 3 stage plan.   In June we will see the re-opening of Outdoor Dining, Non-essential Retail can allow customers in, Salons and Barbershops will open... and Gyms and Fitness facilities are in close range to open.

The Chipotle website shows a new restaurant is coming to Sewell's Egg Harbor Road Acme Shopping Center. And the long awaited Pesce shows "signs" of progress!
This Post Has 0 Comments