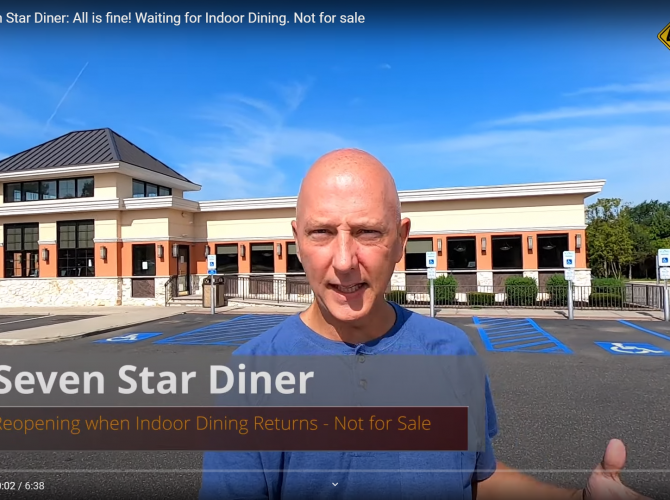 The beloved Seven Star Diner in Deptford (at Five Points) is absolutely fine. They are waiting for indoor dining to resume, and no… they are not for sale.   The real estate signs on Rt 41 and 47 were to promote additional buildings to be added to the larger property they own (the signs are now gone).

I made the video below because the second wave of rumors are on social media saying saying the diner is done, and I am getting messages and comments every day “what’s going on with the Seven Star Diner?”. Not an exaggeration. Every day. So it takes 30 seconds to say “All is well, and they are waiting for indoor dining”.  he other 6 minutes is me explaining how I know. Explaining the confusing sign. Heck, I even chatted up the owners and someone in the industry! Crazy talk!

Correction:  I made an error in the video, which doesn’t change the commentary at all.  The contact I chatted with months ago was Anthi.  In the video I say Alex.  I initially reached out back in March/April… I had 2 Facebook accounts back then.  About a month or so I deactivated one… which was the one I used to comment to Seven Star Diner at their FB page.  So two months later, when I wrote this post (after the second round of rumors), I was being a little lazy and didn’t want to reactivate the other FB acct.  My brain somehow remembered Alex, which was the incorrect name. Well, I just went back into that old account and confirmed the name Anthi M.

My apologies Anthi!   Love your diner… can’t wait for it to open again!