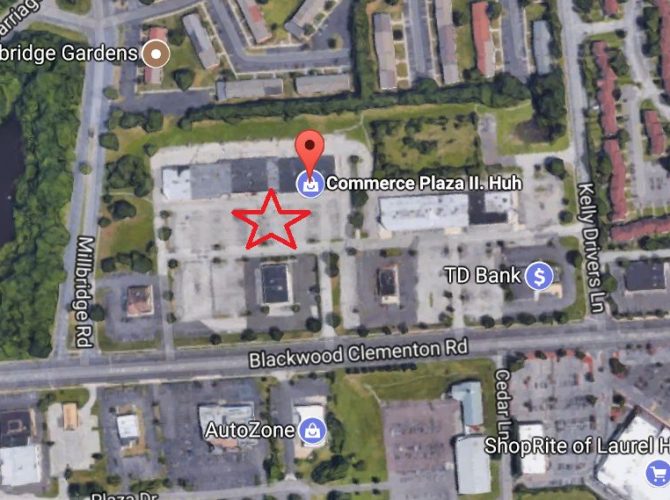 Big props to the Courier Post for this story!  In a recent story about the soon to be developed LIDL Supermarkets starting to hire (as the Vineland store is close to opening), was a line that is presented in the article as an afterthought, but to the readers at 42Freeway it is actually the most important news..

Gloucester Township Mayor Dave Mayer said Lidl is pursuing two township sites.
He said the township has an agreement-of-sale contract with the supermarket chain for one of the sites, a former Nike missile base owned by the township on Berlin-Cross Keys Road.
The company is on the September planning board agenda to make a site plan presentation for that location.
The other site is Commerce Plaza II on Blackwood-Clementon Road.

There it is.  Just a few words.  A LIDL Supermarket is also being considered for Blackwood-Clementon Road, and the Commerce Plaza II location puts it almost directly across from the Shop-Rite.

An interesting twist on this news is, this shopping center has already gone through a remodeling, and if they do add a LIDL Supermarket to the property it is almost guaranteed that some segment of the shopping center will need to be demolished.

42Freeway reached out to Mayor Mayer via email, and he did confirm the interest from LIDL in a second GT supermarket location, but as of this time they have not presented before the planning board.

Back  in May 2016, 42Freeway broke the news on the first Gloucester Township location, which is the former Nike missile base on Cross Keys road, next to Acme.

From that prior 42Freeway article:

NorthJersey.com wrote back in January 2016, that the model for stores is similar to Aldi Supermarkets, but twice the size offering more selections.  LIDL also prefers building their own stores, and would be looking for land to build.  TalkBusiness.Net has additional details on the business model, including the success the company has been having outside of the US.

LIDL has plans for over 100 US stores.  They have started development in the Virginia area first, and the chatter you hear about stores in the South Jersey area is them just getting properties and approvals lined up for development in 2018 and later.

Rowan College in Deptford is moving forward with it's Phase 1 expansion plans which include a new Medical building with Urgent Care. They will be presenting at the May 8th Deptford Planning Board meeting, looking for final approvals.

I just bought Fireworks at the Deptford Target

I just bought two large packs of fireworks at the Deptford Target! Read on to see what is available right now in some New Jersey stores!

Amato Brothers Deli and BAR opened yesterday in Oaklyn New Jersey, on the White Horse Pike. My mind is blown on this one, as I had no clue it was coming until they posted their "first day soft opening" post, and a friend sent to me
This Post Has 9 Comments