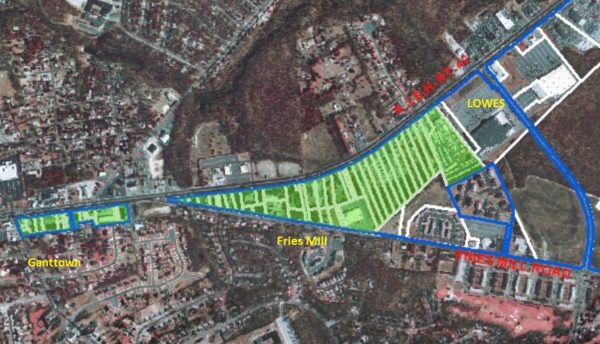 This one will take a little bit to explain.  A recent Washington Township public notice says “ADOPTING A REDEVELOPMENT PLAN AMENDMENT FOR THE WASHINGTON SQUARE REDEVELOPMENT ZONE to provide convenience store with gasoline fuel centers, with limited indoor and outdoor seating as a permitted use within Area 1 of the redevelopment zone as a permitted use…”.

Short Summary: 42Freeway believes that this means someone is looking to build a new Convenience and Gas store location on the Shore-bound side of the Black Horse Pike, somewhere in the area from Ganttown Road down to Lowes.  Considering that there is already a Wawa in that area, and the new ordinance references “inside seating”… we believe this is setting the initial zoning changes needed to build a Royal Farms Convenience store along the Black Horse Pike.

I am not a certified town planner, and this is a high-level explanation (needed to explain where I think the location is).  Towns will develop Master Plans and Redevelopment plans to help define zoning which defines what people can build and where.  In a perfect world, all houses are in the same area, industrial are in another area, and businesses are in a third.  If you’ve ever played the Sim City video game, you get this concept.   Having a master plan helps define the zoning in the area.  As an example, if someone wanted to build a home in the parking lot of the Deptford Mall, there is a master plan and zoning which says it’s a non-compliant use.   A redevelopment plan has similar aspirations but is targeted at specific areas that need to be changed because of a variety of factors.  One could be that it was farmland previously but now its better suited for another use, or like in Deptford where the land surrounding the landfill on 47 is a redevelopment zone to promote commercial construction.

So in the public notice it references Washington Square Redevelopment Zone Area 1. (PDF)   Many are familiar with the Washington Square project taking place along Hurfville-Crosskeys Road near the Virtua Hospital facility.  Its becoming a large project with stores, a large Rothman Facility and housing (more to come!).  Well the reality is the Redevelopment Zone incorporates a much larger area going all the way back to the Black Horse Pike (42)!  It also includes the Watson drive property behind Lowes which was originally slated for a Wegmans (on my list also!)

To get close to the point, the Redevelopment Plan further breaks down this large zone into Areas.  And when I look at the documents, it seems to me Area 1 is the individual parcels along the South Side of the Black Horse Pike, from Ganttown Road down to the Lowe’s Home Improvement store.

This area is a a mixture of small properties and individual businesses, in various states of refinement.

So if you consider that a Master Plan or Redevelopment establishes what can be developed in an area, and then drives the zoning… something like a gas station convenience store is typically called out as an approved or not-approved usage (considering environmental concerns and traffic).  In fact, Washington Township faces several water supply concerns due to water pump stations located within the town borders, so it’s something that is probably always on their minds when considering construction efforts.

So this ordinance is to adjust the Redevelopment Zone definition for these properties, to allow a Convenience stores with Gas pumps.

And let’s be honest.. the town probably doesn’t randomly decide to do this at this time, in this specific zone… unless someone is knocking on their door asking for it.

This is the lowest granularity of location the notice offers.

The public notice states a hearing would take place on 7-25-2018 at 7:00PM at the Muncipal Building, but I did speak to the Clerk’s office and they believe it may be postponed.

This effort follows on the heels of an attempt to modify zoning behind Verchio’s to also allow a Royal Farms to be constructed.  That plan ran into local opposition when residents realized the proximity to the previously mentioned town water supply wells.

Below image is from the Washington Square Redevelopment Document, highlighting the Area 1 referenced in this ordinance PUBLIC NOTICE WASHINGTON TOWNSHIP GLOUCESTER COUNTY ORDINANCE #O14-2018 ORDINANCE ADOPTING A REDEVELOPMENT PLAN AMENDMENT FOR THE WASHINGTON SQUARE REDEVELOPMENT ZONE to provide convenience store with gasoline fuel centers, with limited indoor and outdoor seating as a permitted use within Area 1 of the redevelopment zone was introduced on 6-27-2018 by the Township Council. A Public hearing and Adoption occurred on 7-25-2018 at 7:00PM at Washington Twp. Municipal Bldg., 523 Egg Harbor Rd., Sewell, NJ. Copies are available at the Twp. Clerk’s Office; and on the Township Website at www.twp.washington.nj.us Leo Selb Jr, RMC Township Clerk Cost: $21.69 7/9/2018 1t (4569559)