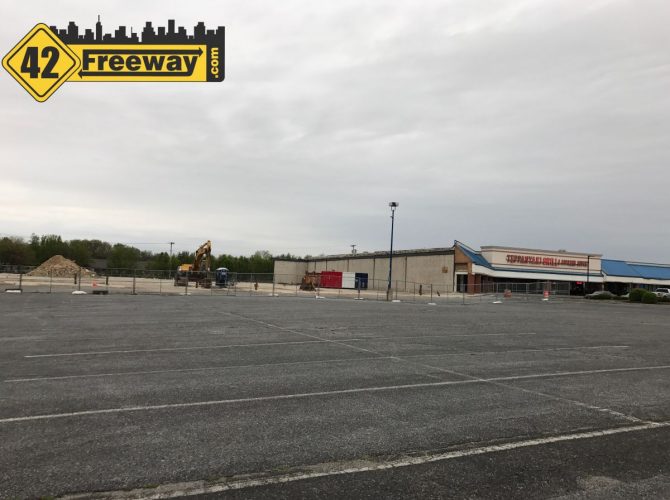 Another one of the “rumors have been flying” stories… that I was getting ready to post about this weekend anyway, but I finally found a nugget of corroborating evidence!

Royal Farms is planning on putting one of its Super convenience/gas stations along Blackwood-Clementon Road in Gloucester Township.  The address (1409) puts the location right in the Commerce Square shopping center which was the location for the Superfresh Supermarket… which was recently torn down.

So the targeted address is known, but can only assume the supermarket was demolished to make room for the Royal Farms store in that area of the shopping center’s lot.

Royal Farms is 100% a Super Wawa competitor, and if you walked into one of their stores you’d think they were copying each other.  They are making a huge push into South Jersey with locations already in development for Bellmawr, Gloucester City, Magnolia and other locations (I know of one other not-reported location that I am working on)

The confirming evidence I found?  Well just yesterday the Gloucester Township MUA meeting notes were posted for the 4/20/2017 meeting, and listed in the doc was a reference to the Royal Farms at 1409 Blackwood-Clementon Road.

So this doesn’t mean its 100% happening.   There has been nothing official stated by the town or Royal Farms, so there is some chance this doesn’t happen.

I have more thoughts and comments on the Super Convenience store wars… hopefully will post soon.  What do you think about a video?

42Freeway was the first to break this story (as far is I know).  If you choose to post about it in your blog or media outlet please mention this site or link to this story (or FB).  Thank you!

Construction has started on one of the two new hotels planned for Deptford, to be located on Rt 41 across from the Staples and AT&T Store, and at the entrance to 42 Freeway South.

[ad_1] Verizon Store coming to Washington Twp's "The Dump" lot. One of…

AT&T Retail is moving into the recently remodeled building on the prominent corner of Blackwood-Clementon Rd and College Dr (in front of Zallie's Shop-rite). The site was previously a gas station.
This Post Has 14 Comments