Missing Moves November 2022 update on several key elements of the Bellmawr project. I include new aspects I haven’t covered before; Over 295 South, and Route 295 over Big Timber Creek (both under development).

Significant progress continues to be made on the Missing Moves project!

The Direct Connection and Missing Moves road improvement projects are centered in Bellmawr NJ, and combined total over One Billion dollars in expense.

A quick primer on the two highway overpasses being developed at each end of the Missing Moves project, and then I provide updates on the individual 42 and 295 end points.

The roadway from Rt 42 North to 295 South is the more complex path as it has to cross over top of both of the major highways.

First, at the start of this path at Route 42 North as you exit (with intent to head to 295 south) you’ll need to cross back over Route 42, which requires a bridge of course!

Further on as that traffic moves to the other end to merge onto Route 295 south, it again needs to cross over that highway to get to the far side where southbound 295 is. Traffic will move down a ramp and join 295 near the new Creek Rd Bridge.

Because of the extra complexities around building these overpasses across the highways, they are the last two segments to be addressed by construction crews… and right now both are active focuses of construction efforts.

As mentioned an overpass is being constructed across Route 42, which requires a center column be constructed to support the roadway as it goes over the highway.

If you’ve traveled Route 42 in the last few weeks, the center column is clearly visible.

In my images from Sunday (11/21/2022) you can see that the core lower column is built and the top wider portion has the wooden frame in place to create a form for the upper concrete.

From my higher angle images it appears that the top portion is also poured.

This section of roadway was one of the last to be addressed as they had a series of other elements to complete first.

Before this column could be created, a much wider temporary center lane was need for construction crews. Before they could shift lanes over to make that space, they had to complete and open the Exit 14 which leads into the Bellmawr Industrial Park.

As mentioned an overpass is also needed over top of Route 295.

Previously the contractors installed the bridge roadway over top of the northbound side of 295. That overpass stopped at the center of Rt 295, resting on a previously constructed center column.

That initial 295 overpass segment has been in place for some time, and in fact the roadway surface there to the center of Route 295 is significantly developed and supports construction crews and equipment.

But.. up until very recently they had not done any work to cross over to the southbound lanes of Rt 295.

That work has started and they are already making significant progress.

So an added twist for this segment that I have not presented until now is, due to the needed angle of the this segment of roadway, the span is much longer before it connects to the down ramp on the other side.

This required a second support structure to be developed, which in this case is a horizontal steel beam across Rt 295 South positioned somewhat in the middle of the open span.

This span over 295 south is long enough that it is actually two segments of steel “joists”, which meet at the horizontal support beam in the middle of the currently open span.

Easier to look at the images to understand!

To further clarify what I mean by longer span; well over on the Rt 42 end the overpass goes more directly straight across so the span is shorter and the single center column in the highway median is enough to support the overpass.

But on the Rt 295 end the overpass does not go directly straight across. It has a much longer curve to position the roadway in line with 295 south. It’s crossing over AND running more in parallel at the same time.

Which gets us to today where they have that horizontal support beam in place, and two of the… what I think will be 10 roadway steel “joists”.

The ramp that will lead traffic down from the overpass and on to 295 south below looks mostly complete.

Another aspect of the Missing Moves project that I haven’t discussed is the “Rt 295 Bridges over Big Timber Creek” rebuild.

So consider that as traffic on the 295 end is moving on and off of the Missing Moves roadway, traffic will need dedicated auxiliary lanes off of the right sides of 295 (north and south)

And at national highway speeds those “exit” lanes need to be fairly long and wide, so that traffic can continue to move safely and quickly from 295 to Missing Moves (and vice-versa)

The challenge for the project though is where the long and wide auxiliary lanes are needed on 295, south of Creek Rd…

Note: The images shown here of the Big Timber Creek bridges are from Mid-October.

So again the need for the rebuild of these bridges is to continue providing the same number of lanes for the 295 traffic passing through but also be wide enough so the traffic heading off and on from the new Missing Moves has a long enough auxiliary lane for Route 295.

While I haven’t dug into how wide the new bridges will be, in the images I have it’s clear to see that even with significant new construction in place it seems they are going even wider (or further over).

You can see they are pouring additional columns in the creek adjacent to the bridge, as well as preparing the surface road area as wider.

This is really just a drone image update of the core straight segment of the Missing Moves project.

It runs along the Bellmawr/Deptford Landfills, and has the small light-industrial area on the other side (The “Curaleaf” location)

Portions of this straight run are overpass, and one area closer to Creek Rd is raised earth roadway.

The noticeable change is the raised earth section is now looking like a roadway with some preliminary asphalt and concrete in place. In my recent updates this was more a dirt hill than a roadway.

As mentioned there are no plans for an exit from Missing Moves into the local roadway system.

42Freeway has extensive coverage of the area’s road projects

Check the Transportation Project Primer as well as other articles. Most recent below 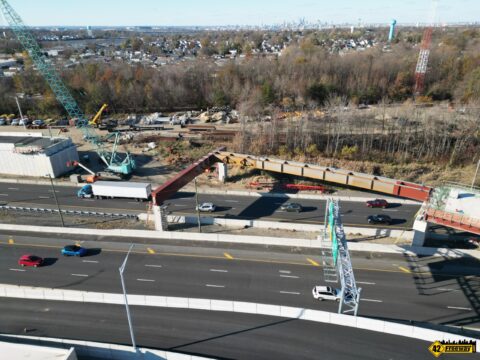 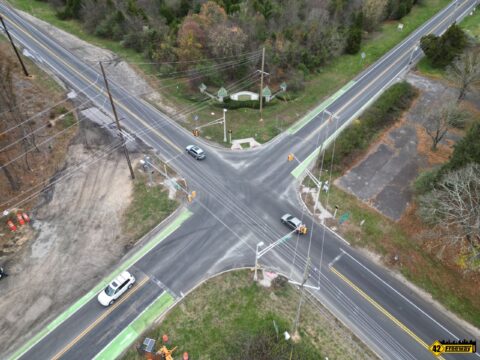 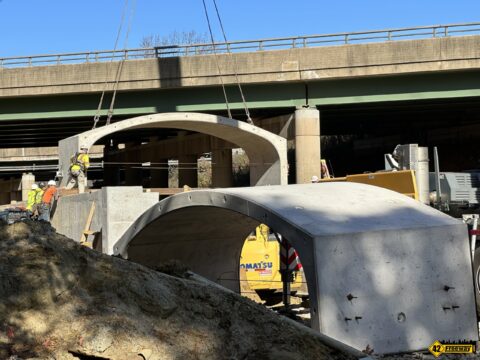 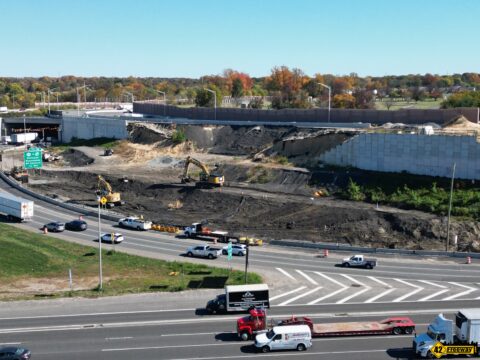 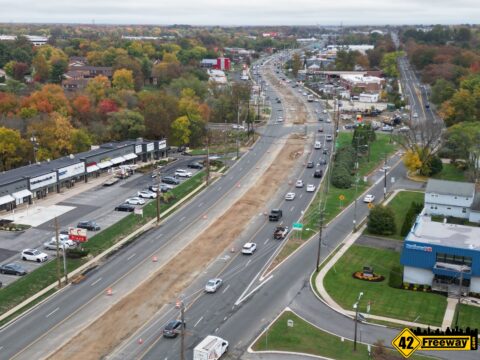 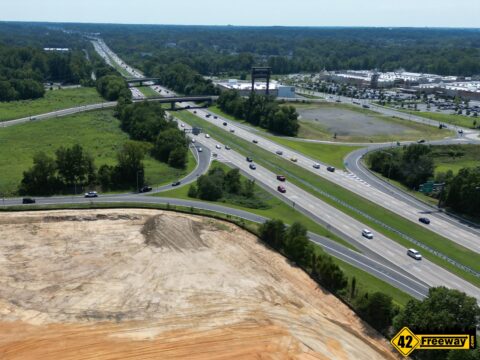