A THIRD large road project for the connected 76/42/295 corridor is being pushed up to start THIS YEAR by the New Jersey Department of Transportation!  This new one is on 76 through Gloucester City, less than a mile north of the massive Direct Connect!

We calculate the full project at $175 million with the the first $90 million portion for this year being the elevated roadway bridge in Gloucester City which crosses over Klemm Ave, Conrail Tracks and South Branch of Newton Creek.

This is a wide stretch of road at ELEVEN lanes, plus THREE shoulder lanes.  Fourteen lanes total!  And the new roadway is planned to be even wider! 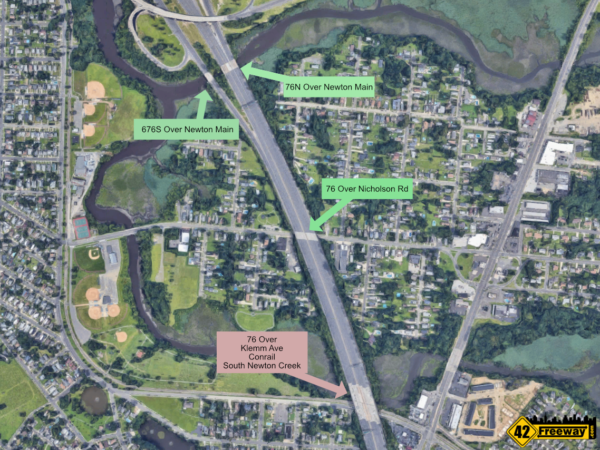 This originally was one larger project set to start in a few years, but the recent request of NJDOT is to split it into three contracts so that 76 roadway section above Klemm Ave can be addressed sooner.. as in, this year!  This is due to deteriorating road and bridge conditions on the roadway over Klemm Ave.

This information comes from DVRPC Board documents (pdf).

Because of proximity and impacts on travelers, we are lumping the three large area projects together (Direct Connect and Missing Moves also)…  but this new effort will not change roadway movements… whereas the first two are completely new traffic patterns.

All told the three projects will total $1.26 Billion dollars (and probably more)… all basically within a 2 mile stretch of highway.

42Freeway has been reporting on these projects for years, and most recently covered the roadway/wall collapse at the Bellmawr Direct Connect project.  Read about the NJDOT follow-up Public meeting here.

Those above projects don’t account for the Route 42 bridge rebuilds which were completed in Gloucester Township.

And more work for Route 42 and the AC Expressway were also approved last year!  More posts to come!

Overall… thank you NJDOT for “showing us some love” down here… buy everyone, this is not going to be fun! 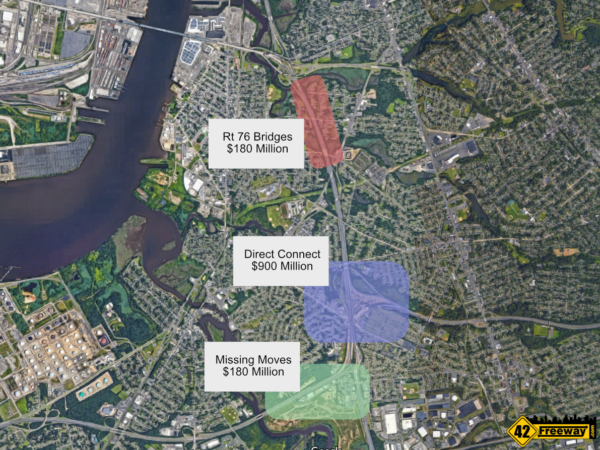 Note: Map images in this post are based on Google Maps, and use under their Fair Use guidelines.  42Freeway has modified some with custom overlays

The awareness of this effort comes from a DVRPC public communications…  The NJDOT is requesting approval of the Planning Commission to move this project up to this year.

For those that aren’t aware, while New Jersey does control it’s own roads and construction within the State, the DVRPC is a Federally designated Metropolitan Planning Organization which must give approval to larger commuter projects.

The Government has recognized that State lines aren’t really boundaries for larger commuter problems and solutions, and the DVRPC sits across State lines of New Jersey and Pennsylvania to review and approve these larger projects.

The jurisdiction of the DVRPC is 9 counties in the two states, and was created over 50 years ago!

And basically, for NJDOT to start this 76 Bridge rebuild project in Gloucester City earlier, they need the approval of the Delaware Valley Regional Planning Commission.

The Key Provisions of the DVRPC organization: PDF Link

Needless to say, things are going to get even more frustrating for area commuters… especially if this coincides with summer shore-bound traffic.

Considering it is already April and NJDOT is looking to move $90 million of the project’s budget into this year, it makes us think that some of this will cross over into the Summer commute season impacting drivers also from Pennsylvania, Cherry Hill area and more.

But the biggest impact could come as “42Freeway area” commuters start heading back to the office over 2021.  Basically anyone coming down 295 or North on 42, and heading to Philadelphia, Pennsauken/West Cherry Hill, or PA Suburbs will now have this new project added on to their commute.

Maybe I’ve waited to long to say this.

The 76 roadway heading to the Walt Whitman Bridge is a mess.  I’ve driven it countless times and wondered “damn, this thing needs to be addressed.  This is awful”.

In the recent public update on the Direct Connect project, the Commissioner called out her coffee cup test… where you should be able to drive the roadway without spilling coffee out of a cup.

Well this stretch of 76 roadway over Klemm Ave definitely fails the test.

You just have to look at Google Satellite and Street Map views to see the pockmarked and patched roadway surface. 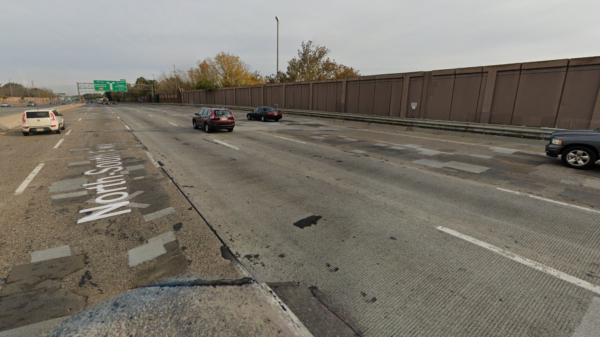 And yes, the State has already tried emergency repairs… back in 2019.   It’s just not enough.

So you have to start wondering.. if the roadway surface is that bad, what’s it like under the roadway?  The supports?

Well NJDOT wondered the same, and that’s what is causing them to want to push this project forward.

There is never a good time to do these projects, but considering road traffic is still reduced from covid “work/school from home” initiatives, this may also be a factor in the timing.

There is more to this project than the large overpass above Klemm Ave, but this sentence from the DVRPC document summarizes the concerns:

NJDOT analysis of the roadway also calls out:

Crash data from 2009 to 2012 indicates this section of Route 76 has crash rates that exceed the statewide average for similar roadways by three times; and NJDOT’s Congestion Management System Priority Ranking have identified these sections of Route 76 and Route 676 within the project limits as “severely congested.

From the DVRPC documents, this first $90 Million contract of the three is to address the following aspects: 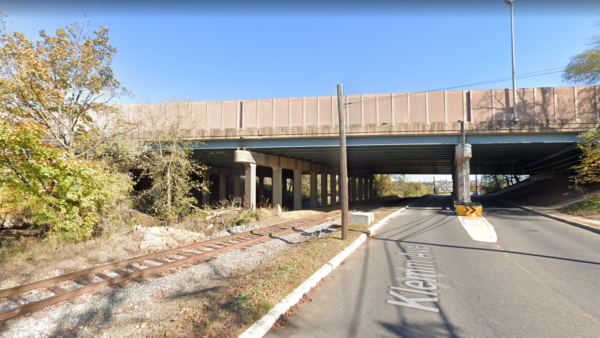 The core “Superstructure Replacement” is somewhat generic description…  in the original documents it was described as “deck and superstructure“.

I would think this contract is for the decking also.. makes sense right?  The short descriptions are a little unclear.. it seems when the split the larger project description in three contracts they left out the word “deck replacement” here, and left it in the third contract.  But it seems impossible to replace the superstructure without putting in new decking at the same time?

Superstructure refers to the horizontal beams which make up the overhead foundation for the main roadway and decking.  From our research that would NOT include the vertical support piers, as that would be considered “substructure”.  We’ll try to clarify that.

This contract is a small $3.5 million dollar effort to relocate utilities, ahead of the larger 76 over Nicholson Road Bridge rebuild,

This is really part 2 of the effort.. an $82 Million dollar effort which will start after the first two contract aspects are completed.

This contract counts as 3 bridges but it’s really over two local aspects… Nicholson Road and also the Main Branch of Newton Creek. 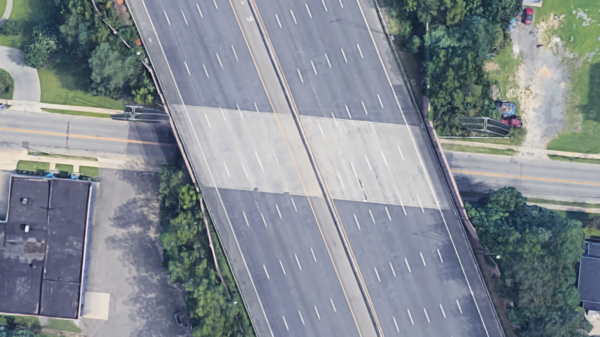 The 76 roadway over the main branch of Newton Creek is located closer to the point where you have to decide if when traveling North, you are veering left towards the Walt Whitman Bridge or staying right and heading towards Camden and the Ben Franklin Bridge.

The roadway surface for both of these bridges appear to be in rough shape.

Rt 76:  Nine lanes of traffic broken out into 3 segments, with two shoulders. The extra segment in this area is because the road is already starting to split here “Left towards Walt Whitman Bridge or right towards Camden/Ben Franklin Bridge

Rt 676:  This is a smaller one direction, two lane bridge with shoulders… which is the traffic passing through from 676 South (from Camden, Ben Franklin Bridge) 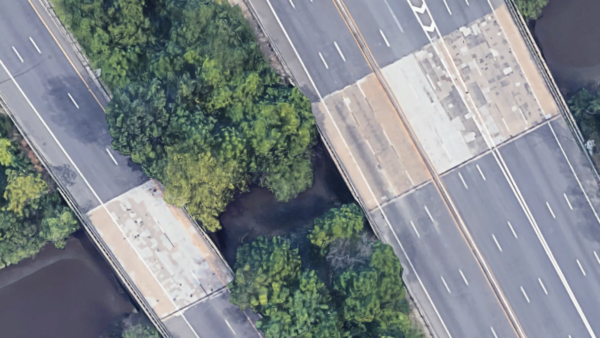 One Ecosystem, One Combined Update Plan?

In last week’s NJDOT Direct Connect Project Update meeting, the Commissioner shared that she will significantly increase the communications on project statuses to the local politicians and the residents (Direct Connect and Missing Moves).

I take her at her word for that… Miss Gutierrez-Scaccetti seemed very open, honest and forthright.

It would be completely shocking if she didn’t live up to her strong promises to improve communications on the Bellmawr centric projects.

And there were several aspects that she volunteered during the meeting.., which further increased the trust.

Well we’ll see in a month as more information comes forward from the NJDOT (as expected).

But there was no admission of “oh by the way, we have this other project coming into play just a mile away on the straight path of 42/76”

But I don’t think that is intentional.   She and her team just didn’t make the connection.  They don’t live down here.

So now that I put this out there… and I hope she and her team will be reading this…  I hope that they can start factoring this 76 Bridge project into their regular local updates.

But to the travelers in the area and extended DVRPC region…

this is all ONE roadway Ecosystem

But don’t stretch my point… could be argued all roads are connected.

But this is literally just 2 miles of roadway, and so much is happening.

So it would be awesome if they could include the three projects in as one cohesive set up updates.

And readers, I’ll keep writing!  I may do more writing than videos…

My videos tend to be too long, take too long, and I don’t think many really watch them all.

Going forward I am really going to pick and choose my moments when I go to video.. and try to keep them shorter when I do.

All this being said, summer is fast approaching and I do like to spend my warm weather time drinking beer in the back yard or heading down to The Crest…

so who knows how much time I have for these posts!?!  ha!

An Offer to NJDOT:

And Miss Gutierrez-Scaccetti…  you really should be visiting this area as part of normal NJDOT business at least once a quarter.

To me these projects are the equivalent of Disney building a new theme park in another part of the world.. and I dont think the CEO waits until opening day to visit, right?

So please come down more often…

And my offer to you is, I would gladly take you and your team on a tour of these roadways.  Pointing out things to you.. both in the project, and related roads.

Challenges of commuters, where roadways jam-up, how one issue impacts another.

I’ll even buy lunch.   And maybe we can bring Assemblyman Moen along too.