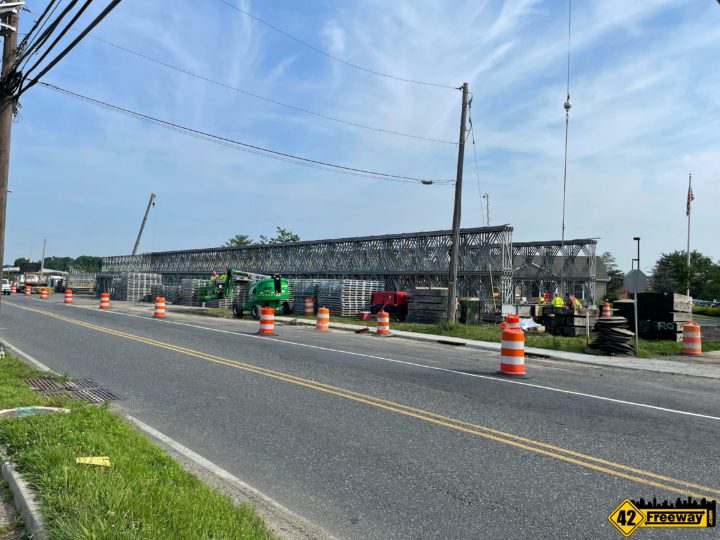 The installation process for a massive temporary bridge in Bellmawr alongside Browning Road is slated to start next Friday (July 23rd), which will have the right lane of 295N closed from 10am to 2pm.

You can read more about it here in our June 9th post. (more links at the bottom)

Coincidentally, 42Freeway.com stopped at the site just yesterday and grabbed a few photos of the impressively large structure! Well it’s somewhat expected, as this temporary bridge is meant to carry all shapes and sizes of cars and trucks, as well as pedestrians.

After seeing the site, we also have a better understanding of why there were significant delays in the start of the bridge work (at least some of the delays). The construction crews needed to extend their assembly area longer… and needed to temporarily close the West side main entrance to the cemetery!

The NJDOT Press Release does a great job of explaining key facets, but we still have some questions regarding this portion of the project. Well first, on to what we know:

Beginning at 10 a.m. next Friday, July 23 until 2 p.m., NJDOT’s contractor, South State, Inc. is scheduled to close the right lane on I-295 northbound just past the Creek Road overpass before Exit 26 where the highway splits for I-76 toward Philadelphia/I-295 toward Trenton. The closure will continue past Browning Road to allow the contractor to begin the installation of the temporary Browning Road Bridge

The bridge will support two lanes of traffic, pedestrians, and utilities.

The temporary bridge will be assembled in three main sections.  As each section is completed, it will be pushed or launched into place.  The first push will result in an approximately 100-foot section of the temporary bridge beyond the east abutment and will stop short of the northbound lanes

This is going to be so incredibly cool to see!

If it isn’t clear already, they needed the extra assembly space because the bridge is built off to the side.. away from the 42/295 traffic! As each section is completed off to the side, it is PUSHED over by a large piece of construction equipment.

When we visited yesterday, that “pusher” equipment was not on site.. but I’ve already heard from one of our 42Freeway sources that it is there now!

So first question about this effort... I would assume for the safety of the cars on 42/295 that when it gets time to “push” the bridge over the lower roadway, that the entire Northbound lanes (and later South) would have to be closed?

I don’t believe that is happening Friday…. and assume that they are going to move a small portion of the new bridge over a bit to make room for the completion of this first section.

My second question is… how long is the entire effort to get the bridge sections across the highway? It feels this is going to take some time to construction each of the three sections off to the side (individually) and move them into place. So at this time, we don’t have a clear picture of how long it will take before the temporary bridge is fully across from end to end.

I would imagine there will be a variety of lane closures over the next few weeks, including possibly times where for a short timeframe (overnight) there will several lanes closed, if not all in the same direction?

A clue to how long this will take… The temporary bridge is expected to be in service in the fall.

We’ll be following this portion of the project closely, and when it comes time for them to really start pushing the massive bridge sections over… 42Freeway will be there with video camera running!

We weren’t on site for too long… a couple other things we noticed.

This additional smaller support column is being completed. This is heading South down 295. Bellmawr Park is to the right.

And workers could also be seen at the top of the larger support columns, closer to the recent collapsed roadway area.

Regarding the Route 295 Roadway collapse… nothing official has been stated regarding; what caused it, who is at fault, impacts on the project.

I feel that’s worthy of it’s own post so I won’t go into too much detail here. I have some folks I want to reach out to.

The State has been improving their communications on the project.

What we still need… is an honest chat or commentary with an engineer on the ground.

One angle would be the collapsed wall…

another would be just a general status interview. “For the second half of 2021, this is what we plan on accomplishing”

I have my GoPro set-up ready, Commish let’s make this happen!

Well as I said, I have a few people to reach out to.

Special thanks to Dan B and his Direct Connection website! A great guy to bounce ideas off of 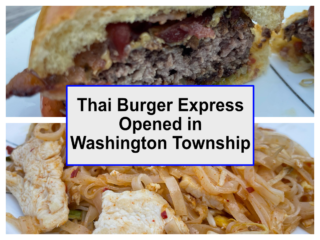 Previous
Thai Burger Express in Washington Township is Open! We Tried It! 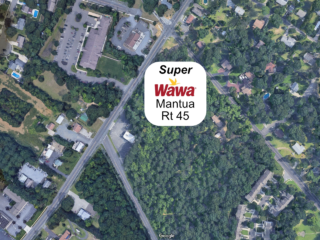 Next
Mantua Super Wawa Proposed on Rt 45 and Mt Royal, Across From Existing Store.