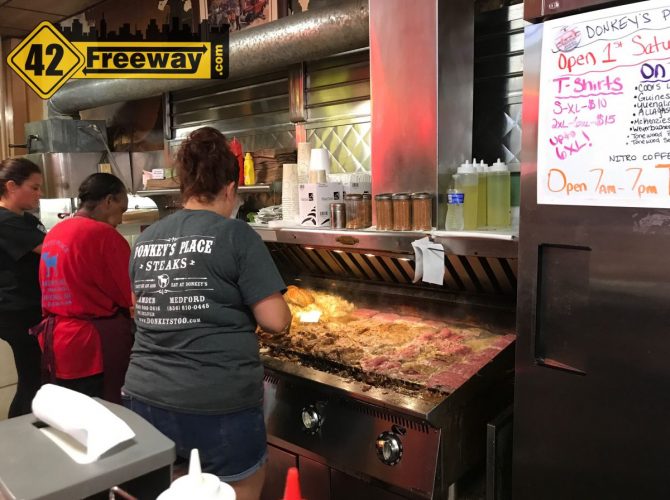 Two things to take from post, and you can skip the rest of the long article if you like:

Add in Victor’s Pub down near the waterfront, and you have yourself a mini Camden bar crawl.

Now back to the article…

They were famous to many long before a national celebrity chef strolled through their doors, but when Anthony Bourdain said on his Parts Unknown show “The best cheesesteak in the area, might well come from New Jersey.  Donkey’s…”  that took Donkey’s Place to another level of popularity.  (YouTube Clip)

Donkey’s Place was opened almost 75 years ago by Camden boxer Leon Lucas.   Leon made it to the 1928 Olympics, and had “a punch like the kick of a mule” which is where his Donkey nickname came from.

Donkey’s is a small, thin, local bar with maybe 12 stools at the bar, a few tables in the front, and a larger dining area in the back.  Rustic in a “1982 paneled walls” kind of way, but loaded with character, and each time I’ve been there its full of good happy people.

The cheesesteak at Donkey’s is something you’ve never had elsewhere.  Bourdain calls it “a Jersey Cheesesteak”, but this is really a Donkey’s thing… it is served on a large, round, poppy seed roll.  The traditional style is meat (of course), cheese, and fried onions that are cooked to such perfection its almost like eating dessert.

I’ve had a few over the summer.  Had never been previously.  And they really are delicious, and probably the most tender cheesesteak you’ve ever eaten.  I haven’t battled gristle of fat on any of the sandwiches I’ve eaten.

There are some options to change up the sandwich, but other than that I think French fries are your only other choice.

A few changes: Craft Beers and Open the First Saturday of each month.

Sadly, not long after the filming of the “Parts Unknown” segment, Donkey’s proprietor Bob Lucas (who is featured in the segment) passed away.  He seemed to have a “consistency is good for business” belief as over the years he ran the bar, not much changed.

After son Robert Lucas Jr took over, he kept the same rustic character in place, the same happy faces… but made two changes:

It may be hard to believe but for years the place catered only to the day-time, weekday crowd.  Hours were only 10am-5pm.  They didn’t even try to pull in the working crowd for a happy hour.  In fact, the hours are still basically the same… with one notable change:  Open the first Saturday of every month.   Those crazy tight hours are why 42 Freeway never made it to Donkey’s previously, and this small change is also why we’ve been able to visit it this summer.   It’s also important to note that there is one other change in the hours, it seems during the summer they have been staying open later on Fridays.

It really is one of the best cheesesteaks I’ve ever eaten, and possibly the best sandwich overall.  My wife hasn’t been there (yet) but I brought her home one and she too raves about them.

Donkey’s Place is located at 1223 Haddon Ave, and is a straight ride from the Airport Circle and also not too far from Lourdes Hospital.  There is a very small parking area next to the front door, and the street out front an on the side offers parking.  Let’s be honest, this is Camden… but I’ve felt safe each time I visited.  The street in that area has a walkable city center feel, but I would be careful parking too far away.

Cooper River Distillers opened in 2014 as Camden’s first legal distillery every.  Their first product was Petty’s Island Rum, and the product line has grown to include a variety of rums and whiskey.

The location is much closer to the heart of the Camden downtown area, just a block away from several of the large government buildings and the more modern L3 complex starts directly across the street.  Our visit was actually on an early Friday night, and the lots across the street were being used for Concert parking (to give you an idea of how close it is).  During a recent Jimmy Buffet concert, the rum filled establishment offered a promotion to pull in the Parrotheads.

The building itself is… well its not much to look at, but we quickly got comfortable at the bar.  I’ll be honest.  It’s a garage.  A warehouse garage.   Maybe 45 feet wide and 120 feet deep.  It still has the rustic 1950s garage feel to it.  Its VERY clean, and they’ve added some nice visual elements such as the gift shop area, but this isn’t like walking into a millennial baiting Fishtown bar.  It was a nice but rainy evening for our visit, so they had the single large front garage door open to the outside, which added in some cooler area and opened the place up

The bar is carved out of an area in the room, not too large and only seating about 8 on one side, and then the L-shaped area offers a walkup area on the other edge.

I was happily surprised at the amount of people there during our visit.  Yes there was a dozen people from a Rutgers organized event, but as we sipped our drinks the crowd started to grow.  They don’t serve food at Cooper River, but there was a group of 8 people who had brought in a large picnic basket and sitting at one of the few tables.  Maybe they were John Mayer convert fans. seeking shelter from a rainy night?  Regardless, there was more energy in the place than I expected.

Everything about the business is exposed to you.  Other than a door for the restroom (also carved out of the rectangular room), its all there to see.  The bar.  The storage racks.  The vats of molasses.  And the distilling equipment.

They offer tours regularly (check the site) and we were able to catch one.

The tour, given by chief distiller and day-to-day bar operator Ben, was interesting in just how hand-made the products are, and how small the batches are.   You start realizing that the whole process could be done in someone’s home garage.  The raw molasses on a rack, which pours into a pot for boiling, and then rolled over to the distiller.   I’m getting these details wrong, but I started to appreciate that in a country of mass produced, corporatized products… that this liquor is made right there in very small batches.  I mean we’ve all been to beer breweries and they are considered small batches, but the vats are still pretty big.  At Cooper River Distillers they are making alcohol about 50 gallons at a time.

I visited with a friend and we had two drinks each, mixing them up so we could try a variety of them.  In the mix we had margaritas, mojitos, old fashioned.  It’s probably a mix of the drinkmaster talents of Ben and Madison, coupled with a really good and fresh product… but everything seemed perfectly mixed.  It wasn’t too sweet, too sour, too strong.  The just tasted great.

We parked right next to the Distiller’s in front of one of the other garage bays, and honestly I didn’t look beyond that to see where the bulk of patrons are supposed to park.  Be alert though in that the Riverline train rides right out in front.

Berlin NJ Based A.C. Moore Closing All Stores! Up to 40 Stores to Become Michaels. Deptford Already has a Michaels, So…

Berlin NJ based A.C. Moore is closing all stores, parent company Nicole Crafts announced today. Of the approx 145 stores, up to 40 locations will be taken over by Michaels, Deptford has both craft stores located less than 1/2 a mile from each other so it would seem one of the two Deptford craft stores will close.

Rizzieri Salon has plans to build a new building at Ganttown and Egg Harbor Roads Washington Township, in the property which also has a newer building which includes Pat's Select Pizza.