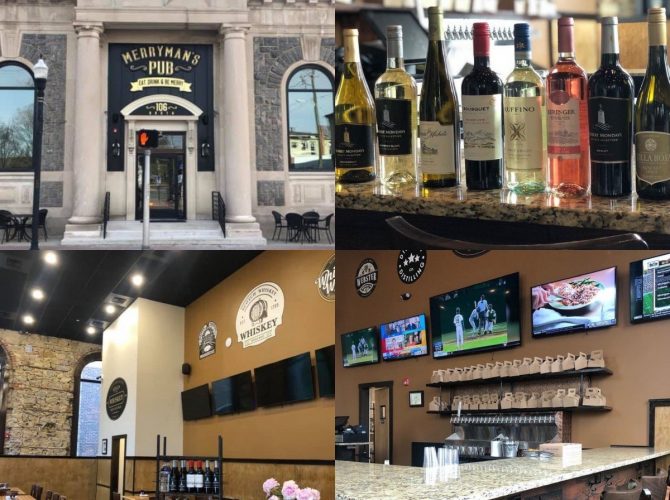 Merryman’s Pub has opened in the heart of Pitman’s downtown area, with an amazing restoration of the 100+ year old Pitman National Bank Building!  Well for right now “open” means they are serving up delicious To-Go offerings of Cocktails, Packaged Goods and select Food items.   Merryman’s Pub is Pitman’s first full bar in what was historically a dry town!

Merryman’s Pub is owned by locals Bill Merryman and Vito Mannino.  Vito is well known in downtown Pitman as he already owns Mannino’s Cucina Italiana and Pizzeria Mannino’s, both just a few doors away from Merryman’s Pub!

The new Merryman’s has a few extra “oh we have to check that out” aspects going for it.  Yes they will offer delicious food, but also just being the first full bar in town… its going to draw a lot of attention!  Also of great interest is the building the restaurant is in, and the amazing effort put into bringing the historic building back to life!  Merryman’s is located in the 100+ year old Pitman National Bank building!

While the original outer granite walls remained from the original building, the owners had to basically build a new building… inside the old granite walls!   Photos from their Facebook page shows how they even had to put in new floors!  And I dont mean new hardwood on top of the floor… they literally had to build entire floors!

In 1911 the Pitman National Bank building opened up on South Broadway in Pitman.  An article in the Morning Post (Camden) described the building as:

It is the admiration of all. The architectural work is more than artistic, the front of the structure being very handsome, with its mammoth columns at the entrance to the bank.  The structure is of Holmsburg granite with trimmings of Indiana Limestone.

The original bank building housed many rooms, offices, and even an apartment!   Unfortunately, prior owners of the building had completely gutted the building… to extent of removing all interior walls and some of the floors, so the Merryman’s Pub owners had the work cut out for them!  (see more photos in the gallery below)  Incidentally, the total cost to build in 1911 was only $20,000!

I’ll speak for myself with this opinion… not many people just happen to drive through Downtown Pitman, unless you are a local (or visiting the Christmas display!).  This is somewhat common with many of the small town main streets, as larger highways diverted traffic away (and hastened the decline of small town downtowns).  I mean, I live not too far down the road in Deptford (last 7 years), basically a straight shot down 47, and drove past the turn-off to Pitman on 47 for many of those years without turning in.   Years later I finally visited downtown Pitman to check out the new breweries.

Which brings me to… the Ballard Park Beer Crawl.   Ha!

Ironically, this former “dry” no-alcohol town has had two breweries previously opened in the Ballard Park area.  Kelly Green and Human Village opened just a few steps away on the same block as Merryman’s Pub, and recently Kelly Green Brewing moved across to the other side of the park.

It works out perfectly that the small triangular park has a brewery or bar at each of its “points”!

Of course you have to be safe with driving and have a designated driver...  but it can make for a great afternoon in Pitman visiting two breweries and then ending at Merryman’s Pub for some food and drinks!  They are all literally a few short minute walk.  And many other restaurants and businesses line the downtown streets.  The number one problem for any retail district is getting the people there, then all the businesses can benefit.  And when New Jersey opens up again… Downtown Pitman is poised for success!

The breweries have already done a great job pulling more people into Pitman, and Merryman’s Pub can only enhance that.

Merryman’s Pub is currently open 4-8pm.   It also appears that the breweries are open for curbside pickup/sales.

Note: With retail and restaurant restrictions still in place now (June 2020), check with the establishments for current hours.

Some images are from the Merryman’s Pub Facebook page.  Used with permission

The continuing wave of Royal Farms stores construction continues, with construction equipment and lot markings appearing at the intersection of Berlin-Crosskeys Rd and Johnson Road, directly across from a long operating Wawa.

The Deptford Movie theater project on Clements Bridge Road has been stalled for almost two years.. now they say a hospital wanted the property.

Hobby Lobby Sicklerville/Cross Keys opens Monday Oct 5th at 9am! 42Freeway was in the store on Saturday before the official opening and grabbed some pics. Read on for thoughts on the store and a few photos
This Post Has One Comment