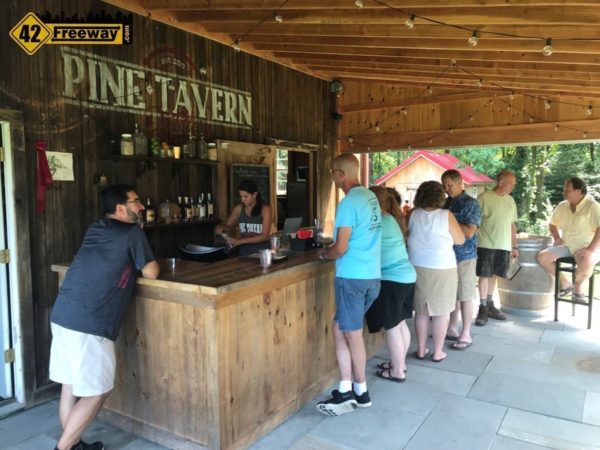 Pine Tavern Distillery opened just a couple years ago on a family farm in Monroeville/Upper Pittsgrove, and recently expanded to add the Hidden Pond Farm… a new barn style building for events of 115 people max.

So yes.. this is a little bit out of the 42 Freeway turf, but it’s less than 10 miles from Rowan University, and it’s a really cool and unique place to visit on a beautiful weekend afternoon (like this weekend!).  And honestly that’s a key factor in 42Freeway posts “oh wow! We have to go check this out!”.   Plus there are a couple other spots to visit along the way to make it a fun afternoon!  (more on that)

So Pine Tavern Distillery is unique in… yes they really are making their own spirits right on the property.  After Cooper River Distillers in Camden closed, there are very few hand crafted distillers in South Jersey.  And Pine Tavern calls themselves a “farm distillery” where they are taking fresh local farm ingredients, making the delicious spirits right on the property, and serving delicious cocktails right at the back of the small barn distillery building! On site they make their Muddy Run brand of spirits which include varieties of; Rum, Vodka, Brandy and a Bourbon Mash.  They also have Fenwick’s line of Whiskey which I was told by co-owner Bob is distilled in Kentucky to their specifications, and spends 12 months at Pine Tavern Distillery aging in their own small cask barrels to give it the Pine Tavern Flavor.  I didn’t mention that at this point we’ve crossed into Salem County, and the Fenwick’s label features the famous 600 yr old Salem Tree, which just this summer fell.

Other interesting things from a write up posted in the distillery: The property started out as a private residence and small farm with a horse barn.  Well it still is a private property!   So when you drive in, you are actually entering into the land of someone’s home.  They are growing corn on the bulk of the property and when I visited a few weeks ago the stalks were 7 feet high, so the corn acted as a shield for the short access road in to the distillery at the back of the property.  I didn’t know what to expect until I got to the end!

So there are now two buildings encompassing the two connected businesses.  As you turn into the parking area you see the rustic looking two story barn building.  Its not large… maybe the size of a 4 car garage (2×2).  This is Pine Tavern Distillery.  You can walk right in and see the equipment used to make the spirits.  Out the back door is a small outdoor bar area where you can order a variety of cocktails, or buy bottles of their product!

And when I say rustic… there is no air-conditioning, and no plans to add it!   When I visited it was about 92 degrees out… but I still found it very bearable. Twenty feet past the outdoor bar area is a new timber frame barn style building which is Hidden Pond Farm.  This new and comfortable building is much larger than the distillery barn…  From their site:  36′ x 48′ Timber Frame Barn, complete with a large wood burning fireplace and 36′ x 20′ outdoor deck.  The interior contained numerous hi-top tables and seating.  They regularly hold music events (Friday Night Open Mic) and the space is available for rental… events, business meetings, and a few weddings slots.   Oh and this new building also doesn’t have air conditioning but is very open… Hey, I said it was rustic!

Pine Tavern Distillery and Hidden Pond Farm area really all the same business… my assumption is for legalities around the distillery business, they had to be defined as separate businesses. When I visited I was fortunate enough to stop in between large crowds.  At first there was just one couple there, but soon a large group of people came in.  There was enough time for me to chat with Bob who is one of the co-owners (and the property owner).   Bob’s co-owner is his stepson Bill, and in true family business style… Bob’s daughter was behind the bar mixing up the cocktails and selling bottles.  Oh I didn’t mention that there actually is a third building on the property.  Just past the Hidden Pond Farm barn is a house… Bob’s house.    As I said, this truly is a family business.

Bob tells the story that it was his stepson Bill who first had the idea to start distilling alcohol.  They had done some research and initially wanted to do it as a hobby, but it was Bob’s wife who expressed concern about the legalities of it.  While it is sad that Cooper River Distillery is now closed, when they were opened they hosted an event “Starting a distillery in New Jersey” which Bill and Bob attended.  It was there they learned alot about the business side and realized a distillery license in New Jersey is only $1000… so they heeded Bob’s wife’s warning, and quickly decided to do it all legit.

And the plan to start Pine Tavern Distillery in the horse barn was started.

Bob added that his family originally lived in Washington Township and years ago moved out to the farm for a quieter life.  Ironic that with the success of their business, they’ve removed much of that quiet farm life from the house.  But, they have an awesome business to bring the family together. And that is more important. I knew this was “out there” but hadn’t put the effort in until a recent visit to Heritage Winery.  After we left the winery and traveled back down 322, I saw a sign pointing right saying Monroeville Winery.  We had never gone there, so we turned right and checked out Monroeville Winery.  Awesome place too, which maybe I’ll post about them later.  While visiting I asked “Where is the Pine Tavern Distillery”… and after being told it was just a few more miles, we made that trip.

So there is a possible fun afternoon of three stops.. .Heritage Winery, Monroeville Winery, and Pine Tavern Distillery!   Just remember to drink responsibly and have a designated driver when needed!

2 thoughts on “Pine Tavern Distillery and Hidden Pond Farm in Monroeville. A Unique and Rustic Experience”