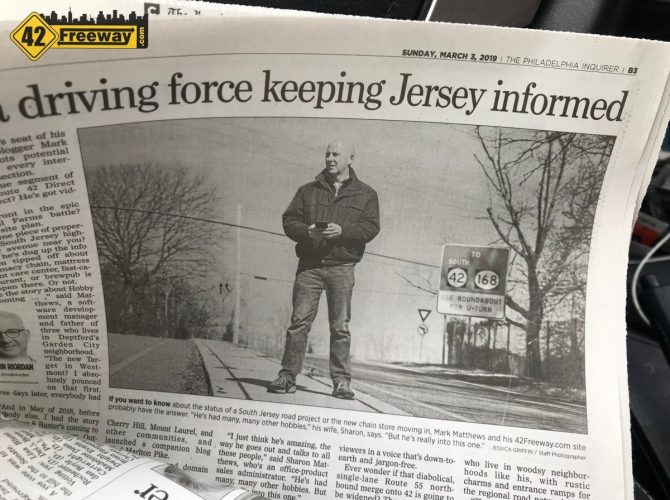 Ok so it feels a little odd to do a post on myself, but I wanted something permanent on the site to capture this…   Philadelphia Inquirer South Jersey Columnist Kevin Riordan wrote a piece on 42Freeway.com and me, Mark Matthews!  It was published online at Philly.com on Friday, and is in the Sunday South Jersey print edition of the paper!!   Sundays are the most read newspaper of the week, and I am thrilled with how the article turned out, and the Sunday paper placement!

How this came about

Kevin and I had been in touch once previously back in June of last year, when he was writing a story on Washington Township, and wanted an opinion from someone who was looking at the commercial aspects of the town.  It was a 15 minute phone conversation back then, and I remember thinking it was a very positive conversation and Kevin seemed to be a genuine fan of what I was doing at 42Freeway.com

8 months later, it seems Mr Riordan continued to follow along with 42Freeway as he reached out to me again… wanting to do a story on 42Freeway.com and me!  The big trigger for Kevin (as he explained) where my posts and videos on the Rt42/295 road construction projects (Direct Connection and Missing Moves).  They’ve gained positive attention because it seems most people aren’t clear on what was happening with the project, and I try to explain things in layman terms (and with very long videos. ha)

Kevin has been a reporter his entire life, and has seen the hard changes that have taken place in traditional newspapers (namely reduced staffing), as the internet has changed the game.   Kevin was intrigued by my site in that I am able to find the stories, write them, take photos, create videos..  and get a LOT of reader interactions…all as a one-man shop from my car and dining room table.

Kevin wrote in his column about my excitement for the blog and uncovering a story first, and that’s exactly what I saw from him when he chatted with me on the phone to set up the interview and when he came to my house just this past Thursday.  He was genuinely appreciative of what I am doing with the site(s).  I wasn’t entirely sure where his article was heading at first, or if it was ever going to make it to publication, but when he added “And the photographer will be there around 11am, is there a highway close by where we could get some photos?”… well then I realized, this is the real deal!

The interview was a mostly focused, slightly rambling conversation of the blog, towns, myself, and the changes in journalism.  Kevin recorded the entire interview, and I joked “Trimming that down to a smaller, concise column is an art form in itself!”.

I shared my secrets of the blog.  ha!  I keep my story ideas in a series of iPhone notes, one each for different blogs.  I mostly use the iPhone camera to take photos, and I have a watermark app on the iPhone to add the logos.  I have a few cameras for video, with the new ones being the DJI Osmo Pocket and the GoPro Hero 7 Black.  I didn’t mention the expensive drone I had for 2 months last winter, which now rests at the bottom of Almonesson Lake in Deptford.

I do my own “greenscreen” effects too, where I superimpose my image onto the video.  I use Xsplit software which can allows multiple video sources, and it has a green screen option.  I literally have a green screen sheet that I hang up behind me… the software removes the green behind me and replaces the background with my shared desktop (which I am clicking through a Powerpoint presentation)

I developed the sites in WordPress, which is the most used web platform.  My web hosting costs several hundred a year, but I can support multiple websites in the same account.  I have other costs for add-on modules and themes and have spent a little on Facebook advertising.

As Kevin tells in the article, as I go about my travels I am constantly noticing things that 99% of the commuters miss.  I pick up on the new construction trucks, fences, and permit signs on windows.  I will stop and take photos of things that look like clues to a new development coming in.  I try to get everything into my list of iPhone notes or I will forget, and then I still have to remember to go back and look at it.   I will look up tax records, and Incorporation documents… and use Google Streetview to figure out shopping center owners, so that I can visit their websites to see the changes in sitemaps.

And in today’s internet driven society, while I do get out and about in my car for almost all the stories (and photos) I can do 99% of my research from my laptop at home.  Tax records, LLC documents, Town Agendas and Minutes, Shopping Center sitemaps, NJDOT documents…   My wife will be watching something on TV and I’ll be sitting in the recliner half watching, and half researching.  ha

Kevin listened to my story and engaged me in conversation, sharing his own opinions on today’s news journalism, and I could tell he was a genuine fan of what is happening at 42Freeway.   It was very flattering to hear that from a recognized and respected journalist.

Kevin and photographer Jessica Griffin were here Thursday morning, and when Kevin said he had some people to reach out to, and “I’ll write this on Friday and Monday”… well I was completely surprised when eating lunch at my desk in my day job just 24 hours later on Friday, to see the article title pop up at Philly.com “Jersey guy…”   Wow!!!

I immediately shared the link on the sites, sent to friends and family… and wondered if it was going to make it into the paper!

I do have a paid Philly.com digital subscription and on Saturday morning I checked the full digital version of the paper, and didn’t see the article.  I thought maybe I only made the cut for an online post.

But then my good friend Anne over at South Jersey Observer texted me a photo… the early Sunday edition of the paper was already in the stores Saturday morning, and in the Region section… there I was!

With a heating repair guy in the house Saturday morning, I had to wait an hour or so to get out of the house to my local Hurffville Road Wawa to grab a copy… and then of course it was over to show Mom at her apartment in the assisted living facility.  Like everyone in the family, she is very proud.  But she gets the added benefit of showing the article to all of the staff and residents within the facility.

Just like all of the creative things that kids do… Mom put it up on the refrigerator with a magnet, just as proud as when she put up the macaroni art on the fridge 48 years prior.  🙂