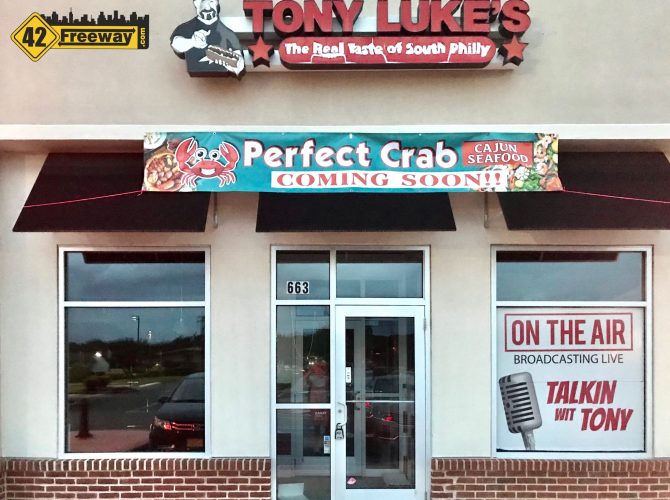 A loyal reader pointed us to this new business coming to Berlin-Cross Keys Rd… A banner announcing “Perfect Crab: Cajun Seafood” is hanging on the closed Tony Luke’s location in Sicklerville/Cross Keys.  More specifically, it is the strip mall center which on the north end has Tractor Supply and Tilted Kilt.

Perfect Crab appears to be a Cajun Seafood Boil place, in the same category as Crab Du Jour which just recently opened in Turnersville (Black Horse Pike).  Cajun Seafood is Louisiana/New Orleans cuisine, which has spicier shellfish “boils” as a key offering.

And yes, for this place to open where it is… the Sicklerville Tony Luke’s has closed.  Actually, it seems that all of the 42Freeway locations are now shuttered.

Well the Glassboro Rowan location became Alumni Grill.   A recent visit to the Deptford Mall shows that Tony Luke’s Deptford is now also closed.  I had read the “Junior” had taken over the Sicklerville store, and as the lower sign in our photo shows, he was running a podcast show out of the store.

Cajun Seafood restaurants seem to be a growing option in the area, with another chain,  Crab Du Jour leading the way in expansion across the Delaware Valley.  From my limited experience, it seems that “Cajun Seafood” leans towards those larger pots of seafood and other items; Crabs, Mussels, Shrimp, Corn, Potatoes and more all cooked together in your choice of sauce.

Deptford’s Joe’s Crab Shack has featured a variety of “steampots” for years, and they can be found in other seafood restaurants as well. (I had one at The Wharf in Wildwood this summer)

But “boils” are typically not all a Cajun Seafood restaurant sells.  A variety of seafood platters are usually offered (including non-seafood items), and in many cases a Cajun Seafood restaurant offers Po’ Boy sandwiches, which can be described as similar to a hoagie, but can feature ingredients such as fried shrimp.  To be clear, we aren’t entirely clear on what the full menu will include at Perfect Crab.

As mentioned, in the Delaware Valley another chain, Crab Du Jour is on a rapid expansion plan.   This year the 42Freeway area saw a location open up in Turnersville, taking over the former Wendy’s location on the Black Horse Pike.

We wrote about Crab Du Jour in July, and it seemed based on numbers of those liking and commenting, it was very well received (some of that was just people being excited that a closed business on the Pike was reopening!)

Over the summer I did a long and rambling experience video of trying out Crab Du Jour’s Seafood Boils.  To be clear, this video is not  the same folks as Perfect Crab. But I am sharing here to give an understanding of what one can expect from the Cajun Seafood Boil category of restaurants.