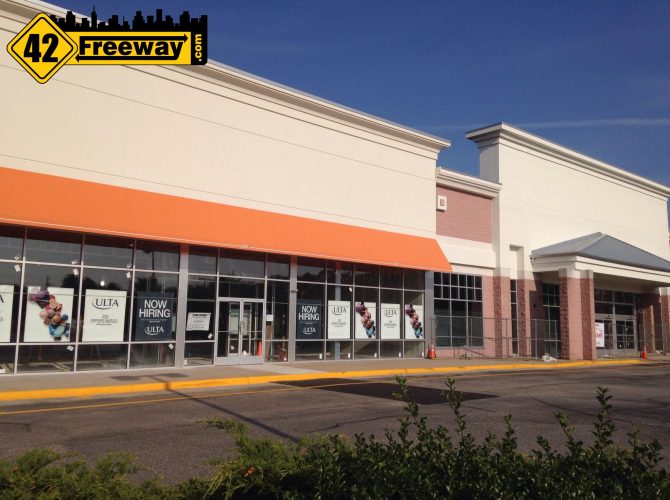 Deptford welcomes 2 new stores in October… and they are next to each other on Almonesson Rd, in the Barnes and Noble shopping center.

Opening first is the eagerly awaited HomeGoods.  Their website store locator says the Grand Opening will be Ocotober 12th at 8am.   It is also states that they don’t really consider this a “new” store as much as its a relocation of the Delran store.   Unfortunate news for the Delran area.

An interesting thing about the HomeGoods store, is they share a parent company with TJ Maxx  and Marshalls’s who have stores in the Deptford Crossing complex off of Clements Bridge Road, and instead of putting the Homegoods store near its sister brands… they opted for the Barnes and Noble center.

Up next is Ulta who opens up two weeks later on October 24th and will be located next to the Homegoods store.

The two stores are in the former location of the Bed Bath and Beyond, which of course is around the corner with the Christmas Tree Store.

Both stores have been hiring.  In fact HomeGoods set up a hiring location within the Fairfield in.  But do a web search for both stores to find the latest information and job opportunities.

A new Ashley Homestore Furniture Outlet opened on Friday, March 2nd, 2017... in Deptford New Jersey. The store sits between the Burlington Factory Store, and the Launch Trampoline Park. This one snuck up on us, as it was supposed to be a different furniture store!

Hobby Lobby Sicklerville/Cross Keys opens Monday Oct 5th at 9am! 42Freeway was in the store on Saturday before the official opening and grabbed some pics. Read on for thoughts on the store and a few photos

South Jersey Times is reporting today that Lazy Lanigan's in Sewell/ Washington Township will become a new location for Swedesboro's Village Pub.
This Post Has 0 Comments