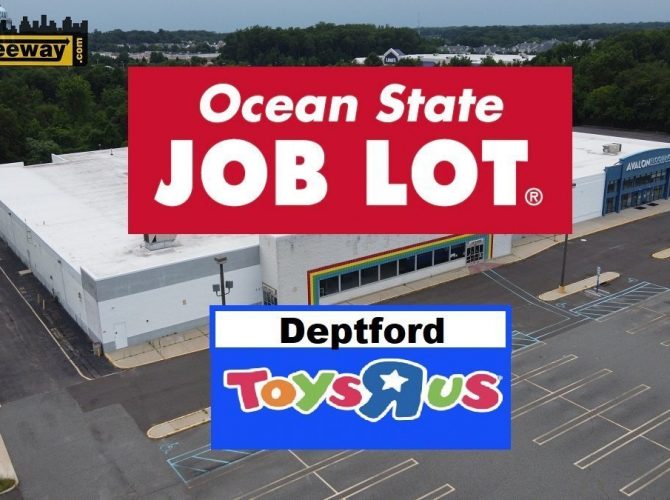 Ocean State Job Lot, the largest closeout retailer in the Northeast… is entering the South Jersey market with a new store in Deptford!  Adding to the excitement, it will to be located in the closed Toys R Us building and I know 42 Freeway readers area always excited when closed buildings are brought back to life!  The OSJL chain is based out of Rhode Island and has over 139 stores in 9 states, with sales approaching $700 million.  While growing aggressively, they are still a family run business!  Their own description classifies themselves as a closeout retailer, but a scan of their most recent sales flyer shows this is a well rounded store offering products for; Home, Outdoor, Clothing, Summer Seasonal and more!  I have not visited an Ocean State store, but it seems similar to a Big Lots or Ollie’s?  (Update: Readers commenting on Facebook say its much more of a full discount store… maybe like the old Ames, than Ollie’s)    If you are familiar with OSJL… comment here or at the 42Freeway Facebook page post.

The new location is on Almonesson Road in Deptford, directly across from the Deptford Mall.  The other connected tenant on the lot is Avalon Flooring, and on the other side of the new OSJL location is the Dick’s Sporting Goods building (Dick’s will be moving to the Mall in mid-August).  The Deptford Toys R Us store has been vacant since the Corporate bankruptcy in 2017.

Ocean State Job Lot has looked to these closed Toys R Us stores as an opportunity to expand, recently acquiring stores in several states.

We are not aware of opening date, but with the holiday shopping season just months away,  I would expect them to move fast to get this construction done and the store open.

42Freeway first became aware of the store coming to Deptford a few months ago via a conctractor site, but we couldnt pinpoint which building (it was clear this was a reuse of an empty location).  Earlier this morning  we realized that the Deptford Toys R Us store is listed at the seller’s site as “Sale Pending”.  Then later today we found confirmation withing the construction industry.  Oh and as mentioned at the top of the post, they already have a job posting online for the Store Manager role!  Repeated emails over the last month or so to Odd State Job Lot were not returned.

On Thursday the long-awaited Mexican Mariachi Grill opened on the now bustling Rowan Boulevard.  42 Freeway stopped in Friday for dinner and margaritas! Read on about our experience and lots of photos!

An electrician's truck and a NEW large piece of kitchen hardware are on site at the Seven Star Diner (Deptford NJ) this late Friday Evening. We are in the third day of closure due to an "electrical outage", and despite a strong rumor mill... it really does seem like this is just a temporary electrical outage.
This Post Has 4 Comments